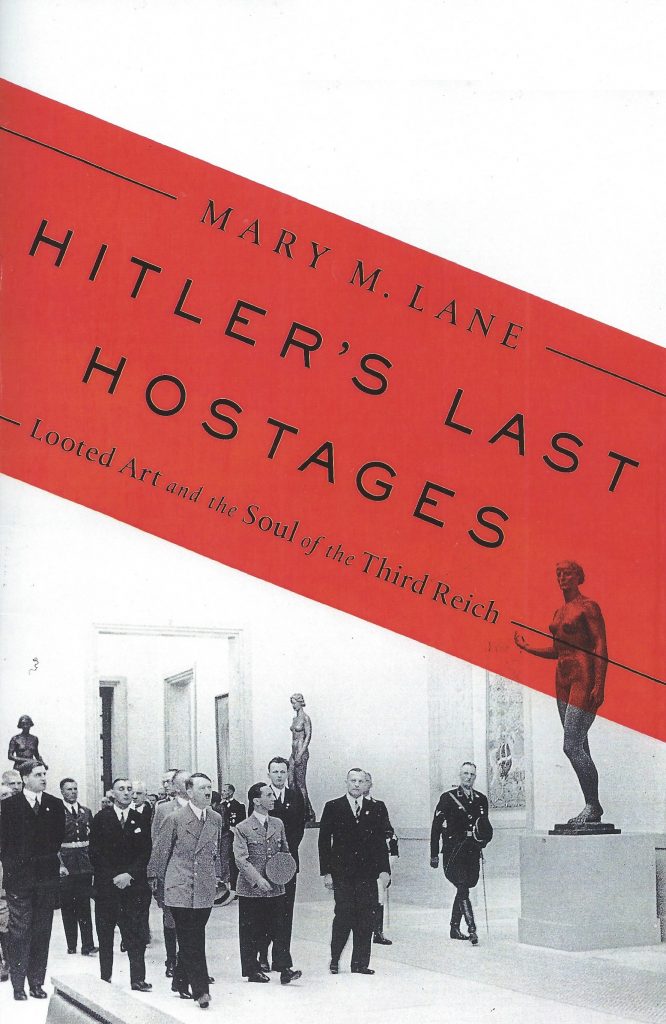 Essential reading for both art history students and appreciators of the present artistic culture, Mary M. Lane’s “Hitler’s Last Hostages: Looted Art and the Soul of the Third Reich” is revelatory. Reading like a novel, this well-researched re-threading of Nazism’s hateful tapestries chronicles the perspective of the Führer’s singular ambition to redefine the global art culture in his Aryan image, the artists victimized in service to it and the art dealers tasked with making it happen.

A reporter for The Wall Street Journal, Lane was the first to cover the 2013 story of Cornelius Gurlitt, son of Hildebrand Gurlitt, one of four art dealers tapped by Hitler to obtain works for the Führermuseum, which would tell the foundational narrative of his finally purified thousand-year Reich. “Hostages” follows a similar exploitative play-by-play as Nathaniel Kahn’s 2018 film “The Price of Everything,” which depicts contemporary art dealing culture where it’s customary to buy directly from artists at the lowest possible price, then cutting them out when flipping their work at auction for astronomical profit. Long before art was transformed into assets, Gurlitt employed undercutting tactics to purchase works for pennies on the dollar from “degenerate artists.” Gurlitt strong-armed Jews to accept pennies on the dollar before they headed to the gas chambers, or when they were starving due to laws that kept them from working. Other works were pilfered from museums in annexed countries. Some sales of degenerate and Jewish-owned work were used to fund the war effort. Others obtained masterworks for the Führermuseum, and some, the senior Gurlitt kept.

Living in paranoiac, near hermitage throughout his entire adult life until discovered in his late seventies, Cornelius protected his father’s blood-art trove of nearly 1,300 works. He lived with art by Monet, Renoir, Degas, with hundreds of other pieces scattered around his Munich apartment. Lane describes how one Matisse was “shoved into a crate of tomatoes.” He occasionally sold pieces to fund a life of leisure. Served in the gray-market sale of these works by dealers—including Galerie Kornfeld in Bern, Switzerland and Ketterer Kunst in Stuttgart—dealers still openly sell in this manner. Works were acquired by feckless private individuals and museums, including the Los Angeles County Museum of Art. He assisted in secreting the profits from these sales by Swiss bank UBS, known as sponsors of Art Basel, which the bank used for years as a pipeline for offshoring unreported capital wealth (as described in Panama Papers). Even after his discovery, Cornelius went unpunished by European authorities, as have those who acquired artworks from his trove.

It would be a case study in abject faithlessness were it not for George Grosz, an anti-cleric, pacifist Communist (an ideology which he eventually disavowed) and Expressionist artist of the Die Brücke (The Bridge) school. He was renowned as an artist for depicting the lurid and obscene, including his grisly classic “End of The Road,” a “fantasy of a double suicide and an infanticide,” harrowing battle scenes, and graphic explorations of female sexuality. A lifelong, often hilariously acerbic critic of fascism, Nazism and Hitler, Grosz was targeted by authorities. Fleeing to America with his wife and children (including his son Marty Grosz, a jazz musician and onetime Chicago resident), the Groszs avoided imprisonment, or worse. Lane’s telling of his story, and those of his friends and fellow artists, creates a fitting narrative where Hannah Arendt could write that his “cartoons seemed to us not satire so much as realistic reportage.”

Many of Grosz’s works ended up in Gurlitt’s trove after fleeing Germany, but his exploitation continued in America. A lawsuit by the Grosz estate claims his Manhattan art dealer, Serge Sabarsky, failed to compensate the artist for over 400 works he sold while pocketing the proceeds. Citing statutes of limitations, New York’s Museum of Modern Art refused to return works by the artist acquired through ill-gotten, untraceable means.

Ultimately, the allure of Lane’s monograph, as she notes in her prologue “Wake Up Call,” is that the art world remains the “world’s largest legal but unregulated industry,” where vacuity within rules of conduct demonstrate how nothing has been done to prevent what she refers to as eager victimizations imposed by a “new Gurlitt.” This continuity draws a line between the iniquities of past fascistic exploitation, and our cold capitalistic present, where such injuries have become institutional convention. Hitler’s last hostages, it would seem, are us.