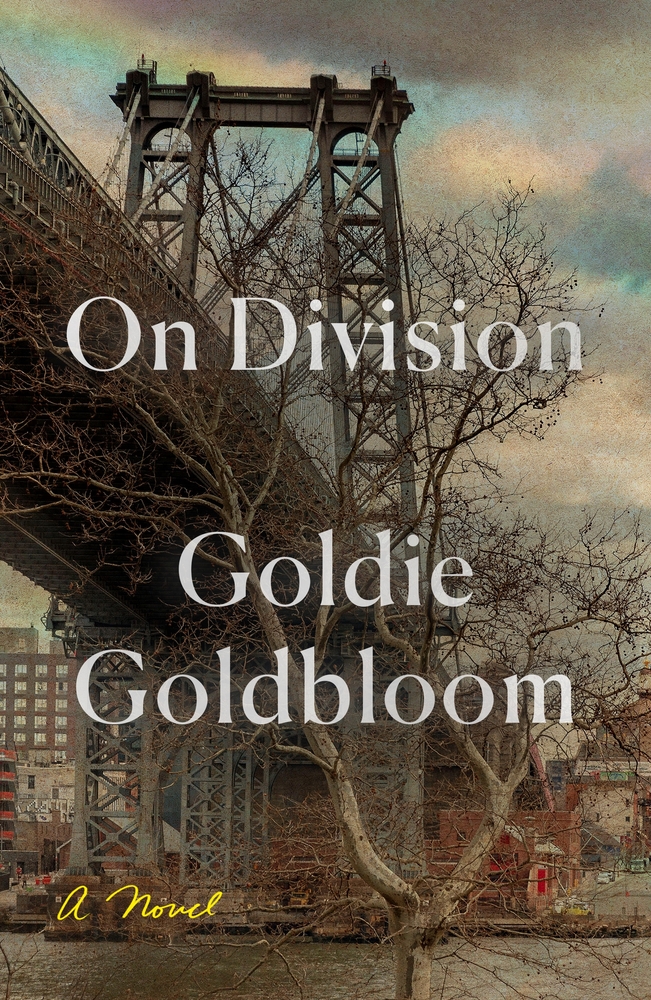 When fifty-seven-year-old Surie Eckstein discovers she’s pregnant with twins, she not only has to adjust her life as a Chassidic grandmother to this unexpected news, but she begins to question the traditions and actions of her marriage, education and religion. As she hovers on the brink of dramatic change, she’s unable to share her news with her husband and family, fearing criticism or ostracization from her community in Williamsburg, Brooklyn. Surie and her husband had a son, Lipa, who died by suicide after facing rejection from his family and religious community as a gay man. Her pregnancy and a young woman she meets at the health clinic offer a way for her to treat the next generation with more compassion. Goldie Goldbloom, also Chassidic, a mother of eight, and a queer activist, speaks about her remarkable novel, “On Division.”

How did you settle on Williamsburg as the location for the novel?
I lived in Brooklyn for about six years. When I started working on the book, I thought, I think I’m going to set the book in Williamsburg because that’s where they have the largest issues. I had been doing work for Eshel, which is an LGBT advocacy organization, and I still do independent work with community members in Williamsburg, and as a result I thought: this story belongs there. I went back and walked around, reorienting myself to the place and the changes that have taken place. It used to be a less-upscale neighborhood and now it’s very current and expensive to live there.

The book begins with an epigraph about Abraham and Sarah (“And Abraham fell on his face and rejoiced, and he said to himself, “Will [a child] be born to one who is a hundred years old, and will Sarah, who is ninety years old, give birth?”)—how much of an inspiration was that for the book?
I have two degrees in theology and so of course those kind of stories are on my mind. Surie’s story is her own story and she has her own trajectory, she’s looking for a little bit of independence. Though it is about an older person who miraculously gets pregnant, it’s really just her own story about what am I going to do? Am I going to make a claim for my own independence, my understanding of my family and my world?

There’s a part where Surie is talking to a midwife at the health clinic about motherhood, religion, their careers, and they’re both a little critical of the other’s choices—
—You’ve never been around a conversation like that, right? (We laugh heartily.)

Is that something you wanted to address in the book, the high standard women set for each other that makes life so much more difficult for us?
One-hundred percent. Even though it’s set in Chassidic Williamsburg, those issues are issues that almost every woman deals with in her life. I really think it’s dealing with larger issues that are happening in the world and the United States in particular.

There’s a lot of Yiddish and Hungarian in the book—what’s your hope when a non-Yiddish speaker reads the book, that they’ll look up the words or figure it out from context?
My hope is that they’ll figure it out from context, and I did quite a bit of work to ensure that was possible. In the past year I’ve read many wonderful books that had Spanish or Greek or some language that I don’t speak. Did I go and look it up? No. For the most part I was like, yes, that’s the experience of being in a community where you don’t speak the language, you don’t understand everything.

Surie sees her pregnancy as a chance to right some wrongs that occurred with her son. Are you a believer in redemption?
Charles Baxter has a great essay called “Against Epiphanies,” this idea that like, something happens and offers great, deep meaning, and as a result you rethink your entire life. I don’t know that I believe in that, but what I do think happens is that when difficult things happen, your thinking slows down and you start to focus on the stuff that really matters. Is there an idea of redemption for Surie at the end? I don’t know. Is she thinking more deeply about something she thought she had given enough attention to earlier? Yes, for sure.

Many of the characters in “On Division” are concerned about reflecting poorly on the community, for example, when someone commits a crime. Was that a concern for you, of reflecting poorly on the Chassidic community as you were writing this book?
Yes. Yes and no. What I tried to do was be as extremely accurate as I could be in terms of showing both the good and the bad. And I think that my book is the only fiction book that writes about the Chassidic Jewish community that accurately is able to portray both the good and the bad in a balance, and I worked really hard to make sure that happened, because I didn’t want it to be just a spiteful tell-all, an angry tirade against all the things that aren’t right in the community. It’s a community where there are wonderful things about it, and some things need attention. When I handed the book to my women readers in Williamsburg, they were almost weeping when they handed it back and they said, You got us, you wrote the real story of us.

As I read your book I thought about how practically every religion has aspects that are wonderful and comforting and practically every religion has aspects that could be improved upon.
Right! The same hand that swings the incense sensor in the Catholic church—and people love that, they love the smell and the whole experience—that same hand could be the hand of a pedophile. As time goes on, we understand that not everything is perfect or everything is awful, it’s somewhere hovering in the middle. There are things that are great and things that are in need of attention.

Does a person like Surie have a chance at making a change in a community like the one at Williamsburg?
Realistically? No. But, you know what? The role of fiction is to enlarge people’s hearts, to allow them to see into somebody else’s world and to create a sense of compassion for that world. And if I have a secret hope, it’s that my book makes its way into hands that need to read it.

The reader comes away with such a sense of sadness for the character of Lipa, the son, and a sense of regret from his parents—could you talk about how you developed that character?
I know a number of children who have committed suicide for a variety of reasons within the queer, formerly Chassidic community. Lipa isn’t one person, he’s an amalgamation of a number of people that I’ve known, and I tried to include the important details that drove each of these children that I knew to take their lives. So, the isolation, the shame, the disconnect from their communities and families and religion.

Do you write with an audience in mind?
Not really, I write with an idea in mind. I usually start with some questions that I don’t know the answers to, and then I write to see if I can come closer to some kind of understanding. In the case of Surie, I was wondering what it would be like to live with an explosive secret. What kind of pressure does that put on a person and how does that transform the way they think about things? That was Lipa’s life and she almost recreates that life, herself.

You include a couple of pages about what life was like for the great-grandmother who grew up in Romania and they’re really beautiful and transportive, but why was it important to include those pages?
To me, we’re all a culmination of the history that our families have lived, so Surie is not just Surie who grew up in America and Yidil is not just Yidil (her husband) who grew up in America. They are the product of their history and the memories of their parents who grew up in Europe. There’s the idea that these histories are almost transported genetically to us. I don’t know how valid the science is, but I do think that’s an interesting thought. Cetaceans, meaning large whales, have been shown to have passed memories down to their offspring, and their offspring behave in ways that indicate that the history changes the way they behave now. And I think that’s true for human beings, so I think you have to include these moments of history that made people the way they are.

Could you tell me more about the work you do in the queer Chassidic community?
I was one of the founding members of Eshel, which is an advocacy organization for queer Jews in the Orthodox Jewish community and I quickly discovered that there were resources for regular, Orthodox Jews, there were not for Chassidic Jews and specifically Chassidic Jews who are leaving the community, which is often the case. I knew a lot of people in the community and none of them would come to the events or talk to another person because they were afraid the other person would somehow out them. It was difficult to make any inroads because there was no way for them to meet. I needed to figure out a way for people to connect, so I started interviewing people and putting their interviews on a blog. It was immediately, ridiculously successful. I still get a lot of emails and telephone calls from people who say you’re the only person we know who’s queer and still living in the community as an out, queer person. I’m not a trained psychologist, so I’ll talk to someone for a while, but I’ll usually recommend they talk to a psychologist. I have resources, I’m like a stepping stone.