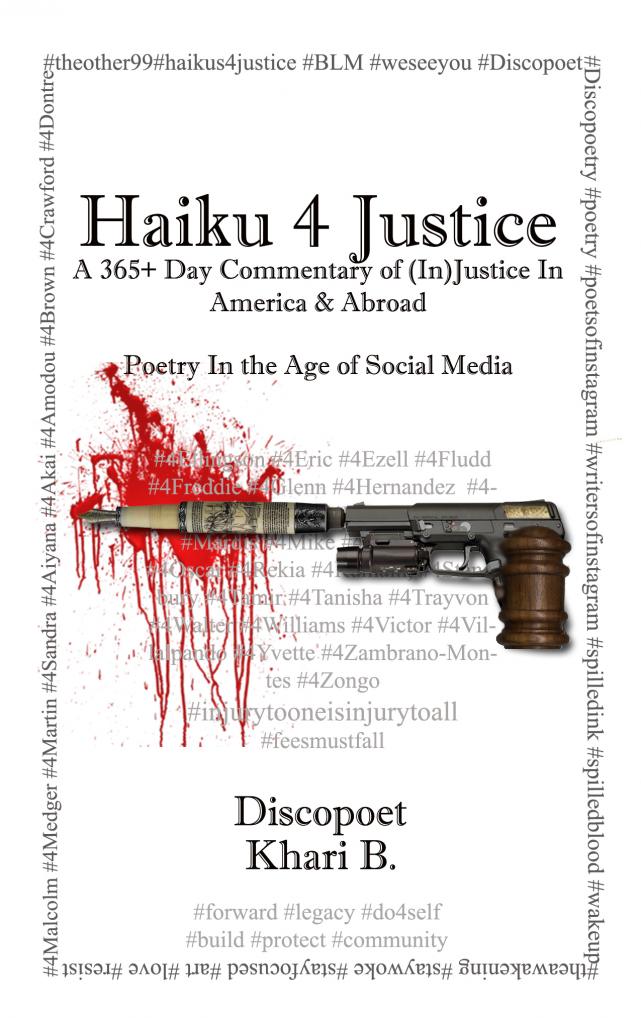 Khari B.’s compelling and necessary new book, “Haiku 4 Justice: A 365+ Day Commentary of (In)Justice in America and Abroad” levels readers in unexpected ways, leaving a long-lasting lump in the throat and in the pit in the stomach. He begins by providing context and history for the year’s events that the poems will detail. These events are ubiquitous and so brutal that, after a while, they run together as layers of wretched heartache and unrelenting pain. The murders of Freddie Gray and Eric Garner in Baltimore and Staten Island; the physical assault of an innocent fifteen-year-old girl in McKinney, Texas; the murders of nine black churchgoers by a white supremacist in Charleston, South Carolina; the death of Sandra Bland after a three-day jail stint for not using her turn signal to switch lanes on the road, and so much more, in one year. In one year.

Sprinkled within these narratives are celebrations of Serena Williams’ accomplishments and James Baldwin’s birthday, among others, reminding readers that there are so many black lives to celebrate. But the beauty and accomplishments of black lives are consistently overshadowed by danger, oppression, fear and death. Lives damaged or destroyed by police, neighbors, politicians. Khari tells of his desire “2 address this mad-dening matter of the murder of melanated people happening all over America.”

Then the haikus emerge, the classic Japanese poetic form which is both unrelenting and unforgiving (much like the content the author addresses), and which does not allow for wasted words or filler syllables. Each haiku is saturated with hope dashed by fear, love crushed by tragedy, life destroyed by injustice and violence. “The Outrage” reminds us that “Murdered boys & girls /R not an epidemic /unless they’re pink-skinned.” “Patience Is Not A Virtue” provides echoes of Langston Hughes’ poem “Harlem,” about the toll that waiting for basic human rights takes on a person. Time is never stagnant. Either we move forward toward better things or we rot in the waiting. Khari writes, “Old age has taken /many waiting 4 justice /from the status quo.” In the current status quo, a young white racist can walk into a church, be welcomed by the black community inside, and then massacre the black parishioners in hopes of starting a race war. “My Bible & My 45” tells us, “Prayer don’t stop bullets /& don’t protect us from them /Pray, then lock and load.” No place is safe. No place is sacred.

Khari’s writing includes many abbreviated words and texting language, and I can’t help but think that it suggests there’s simply not enough time to worry about standardized spelling and grammar over informal, spoken urgency in both the content and context of these poems. These conventions are meaningless while people are dying. If this book only deals with one year of black lives fighting for breath, justice and life, then all other conventions must fall away until humanity emerges.

Khari B. is one of the main subjects of the award-winning documentary “Thee Debauchery Ball,” which was presented at the Black Harvest Film Festival.

“Haiku 4 Justice: A 365+ Day Commentary of In(Justice) in America and Abroad”
Khari B.
Discopoetry Publishing, 178 pages

Amy Strauss Friedman is the author of the poetry collection The Eggshell Skull Rule (Kelsay Books, 2018) and the chapbook Gathered Bones are Known to Wander (Red Bird Chapbooks, 2016). Her poetry has been nominated for the Pushcart Prize and Best of the Net, and her work has appeared in Pleiades, Rust + Moth, The Rumpus, PANK, and elsewhere. Amy’s work can be found at amystraussfriedman.com.