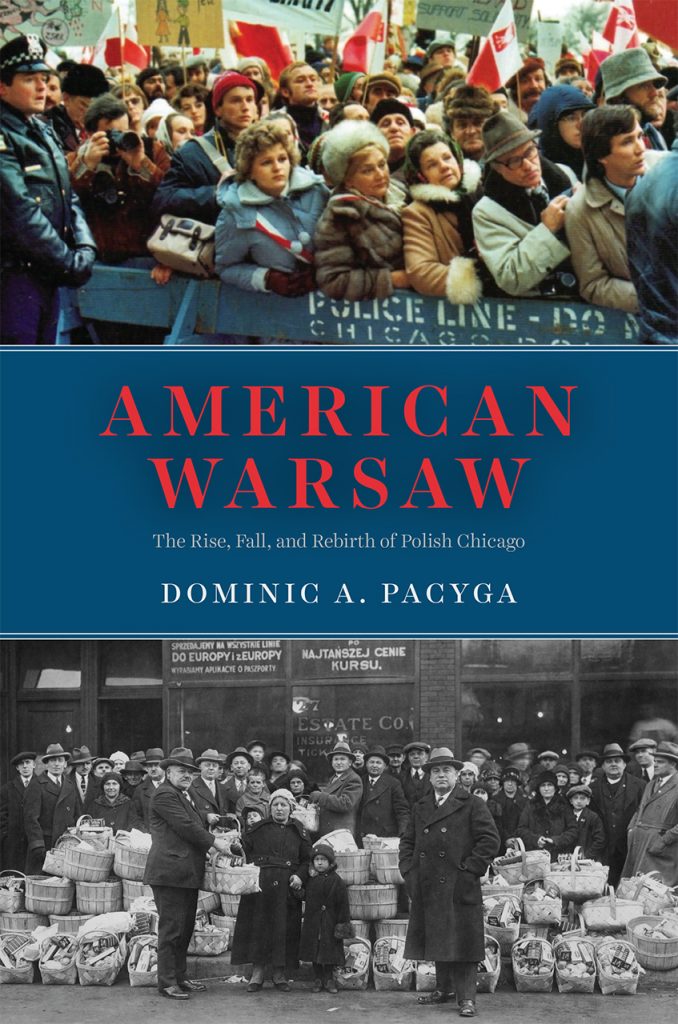 There’s probably not a person in the United States—and certainly not in Chicago—more qualified than Dominic Pacyga to document the path Poland’s citizens took in emigrating to the United States. Pacyga’s seventh book is a chronological account of how the Polish diaspora, the Polonia, established itself in Chicago and helped to build the city while wrestling with issues of Polish identity and sovereignty.

Chicago wasn’t simply a “sanctuary city” as the twentieth century dawned on America. “Chicago,” Pacyga writes, “had always been receptive to immigrants. By 1910, these newcomers and their children made up roughly eighty percent of the city’s population. Many U.S.-born Protestant whites wondered if cities like Chicago or New York could even be called American.”

Pacyga, the 2014 Mieczyslaw Haiman Award-winner for exceptional and sustained contribution to the study of Polish Americans, explores the “American” question for immigrants. At what point are you considered an American? And how does that alter the connection to the homeland? Formulating these answers proved especially complicated for Poles, who argued these questions with their Polish brethren while wondering if their home country would even recognize them upon their return to Poland.  “What did it mean to be Polish in Chicago after the ‘war to end all wars’ had finally brought about a resurrected homeland?” Pacyga asks. “What did it mean to be American for a generation born in the city?”

Through tireless research, Pacyga develops a perhaps unintended thesis: that the current issues of the immigrant in Chicago and in the United States have been played out in cycles over the last century-and-a-half. All of this has happened before, he seems to assert, especially when recalling the dilemma Polonia faced as they watched, helpless, while Poland and its people lay open for German hegemony during World War II. The Polonia waved the Stars and Stripes from Chicago, felt the guilt over not being overseas to defend the motherland, while “the [Chicago Tribune], which had been a bastion of isolationist sentiment and anti-Roosevelt politics before Pearl Harbor,” Pacyga writes, “often continued to take ‘America first’ stands in its editorial pages.”

It’s haunting to discover in “American Warsaw” that history and language have repeated themselves. The Poles at the beginning of the twentieth century are now the Mexicans, Central Americans, Ethiopians and Syrians in Chicago a century later.

Pacyga’s pride in Poland and its role in shaping Chicago is evident but controlled. He prioritizes facts, even if they paint the Polonia in an unflattering light. Poverty and the limits of the New Deal pushed Polonia into gangs. Polish Americans instigated racial tensions, hate crimes and murder. Pacyga doesn’t shy away from the history. The writing leans toward dispassionate reportage and away from more colorful, analytical storytelling, and this isn’t a bad thing. Pacyga, a teacher for nearly forty years, provides a full account and leaves the conclusions to his students and readers, like all great teachers seem to do.

“American Warsaw: The Rise, Fall and Rebirth of Polish Chicago”
By Dominic A. Pacyga
University of Chicago Press, 296 pages