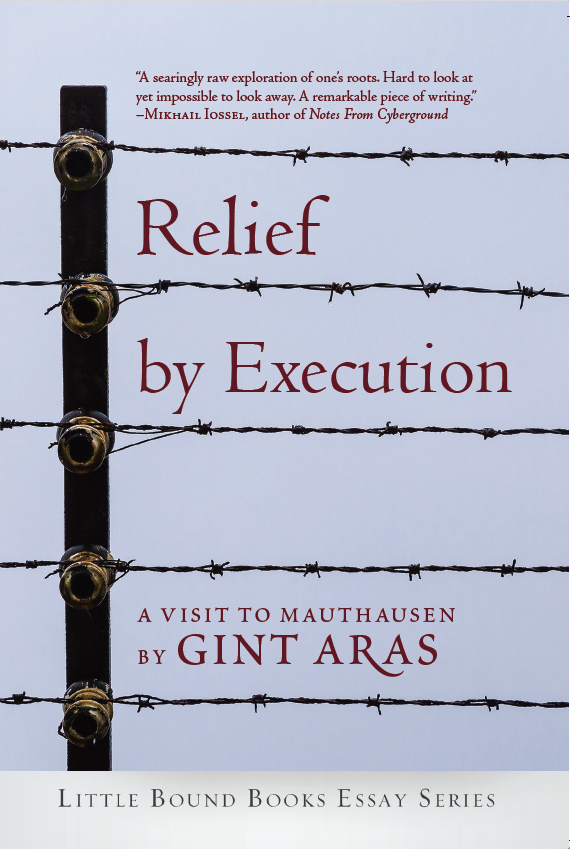 If a stranger in a café tells you that you can face your subterranean impulses only by visiting a death camp, what would you do? If you are Gint Aras, you heed the warning that hidden things poison us, “for a writer, discovering poison is valuable.” So, he goes to Mauthausen and writes about it. “Relief by Execution”—about personal identity, racism, suffering and transformation—is bookended with his visit and attempt to free himself from a familial legacy of violence.

A strong essayist poses questions along the journey, meanders and makes discoveries on the page. Aras explores the brutality of his Lithuanian-American childhood and trauma inflicted by his father. He queries the connections between his racist, anti-Semitic family, violence in their Cicero neighborhood and generations of conflict in Lithuania, wondering at how his people clung to a sense of victimization while creating fresh victims among their black neighbors and own families.

Aras’ portrait of Cicero is compelling. It’s the location of his excellent second novel, “The Fugue,” and a neighborhood he knows well. He makes the reader a witness to acts that as a child, the author was told never happened, to keep quiet about. By telling now, he perhaps tries to accept events of his childhood and of history. Truth-telling may enable him to move on, but is also as an act of resistance. Aras is sparse with words but big on impact, retelling childhood beatings at the hands of his father, all of which are denied by his mother. He outs his family as vile racists and anti-Semites. It is most affecting in the raw moments when he shares his shame and lowest points, and the reader feels immense compassion.

The book has an uncomfortable premise of visiting Mauthausen as an act of meditation. The author imagines himself as a perpetrator, thereby uncoupling generational memories and freeing himself from inherited suffering. This thread raises important questions but felt tonally out of kilter in comparison to the more direct memoir sections. Imagining oneself as an executioner of Jewish prisoners while trying to break a cycle foments feelings of being very uneasy at times, as did reading the racist stereotypes of Aras’ childhood. Maybe that was the point, to make readers uncomfortable, as they confront their own complicity in dehumanizing others—a timely reminder. This is a thoughtful, beautifully written essay that packs in many sharp questions about how people function. (Toni Nealie)