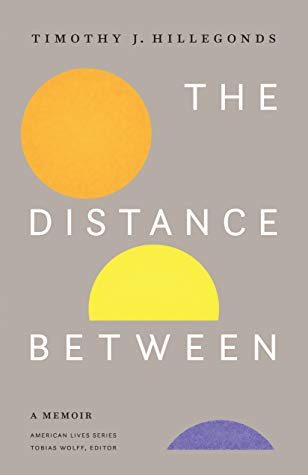 “The Distance Between: A Memoir” is a debut memoir about reevaluating teenage rage and intimate-partner violence. With a nuanced and probing eye, author Timothy Hillegonds recalls how, after a promising pre-teen career as a trick inline skater, he veers off course, running from his problems straight into the arms of much thornier problems. After raising garden-variety hell in suburban Oak Lawn, he pushes his mother and stepfather away. Deciding his problems are geographical, he sets off to Colorado with dreams of becoming a professional snowboarder.

There he falls in love with a young woman, April, and her young daughter, assuming a parental role before he remotely knows how to take care of himself. Alcohol, drugs and poverty push them into a destructive cycle, and within a few quick months, Hillegonds is speechless at the violent person he becomes. “My words trailed off, inadequate and desperate,” he writes. “Behind me, traffic moved slowly down Highway 9 and the reality of who I was thickened in the atmosphere around us, like a fog the new day’s sun simply can’t burn off.”

Hillegonds is borderline forensic in his cataloging of the wounds he carried and grievances he nursed. Sometimes, his insights electrify a scene, making otherwise mundane disagreements crackle with palpable resentment and desperation. Other times, Hillegonds explains so much, he risks sharing spoilers to his own life story. It’s understandable that when presenting ugly behavior, a memoirist may want to ensure the reader understands from where the ugliness arises.

“The Distance Between,” is earnest, well-written and compelling, but my mind kept wondering about the time after all this misery and violence. How did Hillegonds go from the kind of guy he was—in and out of jail, blackout drunk, unable to keep himself from terrorizing his girlfriend and their kid—to the man he is now? Perhaps that’s another book entirely. Hillegonds has mapped the heart of a self-pitying, abusive young man, the type whose carnage tends to make the news lately. Unlike some of the infamous angry young men of our news cycles, the damage he inflicts is contained, limited to his girlfriend, her daughter and the child they have together. It’s a book about deeply knowing a person who is hellbent on not knowing himself.

“The Distance Between: A Memoir”
By Tim Hillegonds
University of Nebraska, 280 pages