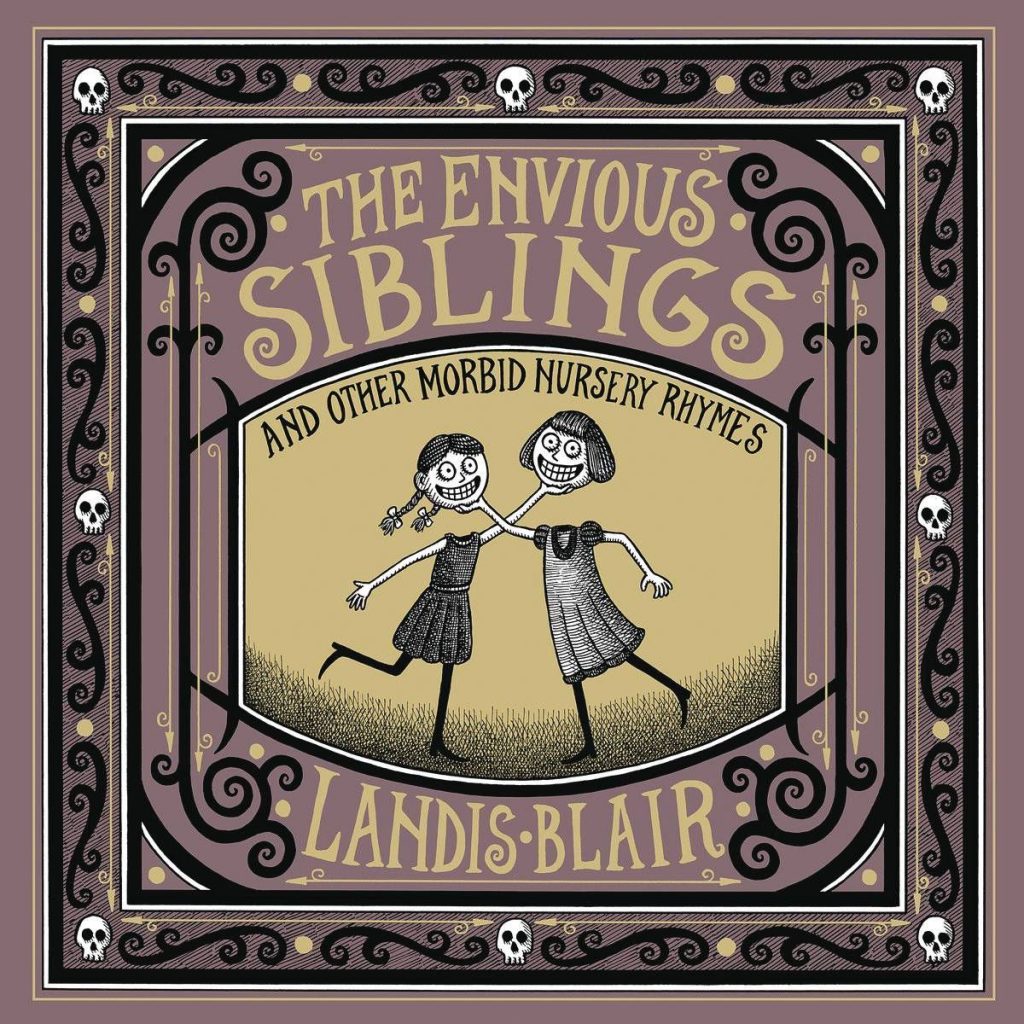 Landis Blair is a skilled artist with a distinctive style and sure-handed technique. Blair, thirty-six, a native of Waukegan, creates densely layered compositions that achieve richness and depth by varying the density of his finely controlled line work—shimmering panels where fields of white are made luminous by their arrangement alongside the deep grays and blacks he builds by tightening his crosshatching, tweaking the spacing and line weight of his shading, as seen in his previous book, “Hunting Accident” and the arresting illustrations he provides for Caitlin Doughty’s “From Here to Eternity: Traveling the World to Find the Good Death.” Blair is undeniably a masterful draftsman with a keen eye for composing in ways that direct the viewer’s attention, shape and drive the narrative, and intensify the emotion of the work, which is also evident in “The Envious Siblings: And Other Morbid Nursery Rhymes.”

Even in the presence of such skill, Blair sets a task of confounding difficulty, namely to create an original work that emulates Edward Gorey, one of the last century’s most treasured eccentrics of publishing, a creator of enigmatic, darkly mirthful and winsomely forlorn illustrated stories unlike much of anything that had come before him. Gorey was an obsessive whose images were comprised almost entirely of very fine lines. There was a peculiar formality in the propriety and gentility of his language, and in the cool control of images where, even in action, his figures seem posed, as though they remain aware of the hand rendering them. Even when he subjected them to gruesome forms of mayhem, it was always plainly evident that Gorey held them in great fondness. Landis Blair is to be commended for the ambition in this tribute to a peerless master, where Blair makes a work that seeks to be in conversation with a beloved body of work that attained hermetic fidelity to its own rules, talismans and iconography. The world that Gorey conjured was a cogent, if obscure one—it unfolded inside an exacting, if largely imaginary, point in time, a temporal slice of the early twentieth-century peopled by war profiteers in fur-collared coats, powdered opera divas seated at vanities in diaphanous kimonos, liveried chauffeurs with sinister mustaches—a shadow cast of a shuddersome Edwardian parallel “Downton Abbey.” This lucid precision in how Gorey fashions this coherent world, from its unsettling topiary grounds to the antimacassars on chair backs, all of which coalesce into a sui generis creation insulated from the laws governing the real world.

Due to this satisfying, resolved sense of completeness of the world Gorey has made, the difficulty of adding or responding to it is compounded for any artist attempting it —because to equal his achievements would require either mimicry so flawless it is indistinguishable, or skills of every description that equal or are superior to those on display in the source material. And Blair, despite his impressive abilities, does not seek to construct an imitation so faithful that it might blend seamlessly into Gorey’s world. Gorey faces are rendered with a minimalism that distills them to emblematic, near-expressionless totems a reader may imbue with emotion from context, whether in the image itself—a piece of statuary poised to fall, or a bicycle abandoned beneath a threatening sky—or in the deft richness of his writerly voice, a voice at once spare and restrained that nonetheless signals a great depth of feeling beneath its reticence. It is easy, given his enthralling illustrations, for Gorey’s cunning as a writer to escape our notice. But his was such an uncommon voice, with an odd music and cadence so wholly its own, and a nervy, dissociative remove so recognizably his, that it is hard to imagine some of his lines coming from any other source, as from “The Unstrung Harp, Or, Mr. Earbrass Writes a Novel”: “Mr. Earbrass is seen on the croquet lawn of his home, Hobbies Odd, near Collapsed Pudding in Morthshire. He is studying a game left unfinished at the end of summer.” These lines hint at the many themes and obsessions that recur in Gorey’s work: a pervading sense of the irretrievable, the stealthy approach of decay and death, a deadpan playfulness with the sound of words, the futility of artistic struggle, a kind of existential bafflement.

Blair, though, attempts both to distinguish his own work from that of the originals that serve as inspiration, so has no intention of trying for perfect facsimile. The faces of Blair’s characters mostly wear crazed toothy smiles, their eyes wide, manic, unblinking. And while his line work, as noted, is finely wrought, and his compositional use of negative space evokes Gorey’s framing, these deranged faces add an amphetamine edge to the images. His figures are more angular and kinetic—Gorey’s characters were mostly rounded—off-kilter, but not frazzled in the way Blair’s often seem. It is understandable, even inevitable, that an artist exploring the idiom of the artist who precedes him will put their own spin on things, but the choices Blair made overshoot the mark. Blair’s imagery does not cleave to the gently expressed rules that Gorey laid out on every page.

Further, Blair is not the equal of Gorey in a couple of crucial respects. Where nearly all the copious carnage in Gorey’s work was implied, or referred to in events taking place off the page, out of view, or at most tastefully alluded to at the edge of an image (the limp and dainty feet of an heiress brained by a punchbowl glimpsed at the base of a doorframe, say.). Blair is more frank in his depictions of bloodshed—the title story, for instance, the strongest of the bunch, is a parable about covetousness with an escalating sequence of the two siblings shredding and snapping pieces off of one another’s bodies. Blair also is less precise in the era in which he situates his action—the modes of dress (so feverishly attended to by Gorey) and architectural settings are vague in their conception and execution. The “old-timey” flavor that Blair evokes could be forty years gone or a hundred, which is no crime, of course, but falls short of the standard of particularity that Gorey established.

Ultimately, Blair’s limitations as a writer preclude him from attaining the level of excellence we see in Gorey. On every page of Gorey, even if only a handful of words appear, one gets the clear sense of an author who has sweated over every word, revised and amended his text with all the care he’s devoted to his illustrations. Blair has been unable or unwilling to exercise the same degree of exactness in his text that we see in his images—his verse all rhymes, but lacks the elegance we come to expect in Gorey. In the following lines, from “Honourable Beasts,” for instance:

“It seems,” said the Tiger, “that I missed my cue,
In my excitement I failed to tell you,
Your mother will be at our fine dinner too.”
And the bear and the gator responded, “It’s true!”

The word choices are apt, maybe, but uninspired. The cadence is missing the minuet lilt of a comparable Gorey passage. Also, the text does not advance the action. It reports on the events pictured without working in concert with them to attain momentum and clarity not otherwise possible. A writing teacher once advised me that “every ant must carry a crumb,” by which she meant that every syllable we put on a page must perform some of the work of carrying out the overall objectives of the piece. In Gorey, we may pluck up any single ant, in the text or the images, and deduce what task it performs, and further that each is performing work not being done by any other ant on that page. In Blair, though, his pages offer many pleasures and have much to admire, there is not a comparable degree of rigor and judgment governing the division of labor on these pages.

Blair is an artist of great ability, but he sets an extraordinarily tough task by seeking to operate within a world fashioned by a master, to play a game not strictly his own. It is like an adept pool player challenging a snooker champion to a match—the steady hand and sharp eye he brings might prevent a humiliating defeat, but since he’s playing a game not usual to him, his chances of outright victory are slight. Landis Blair is an extraordinary illustrator with a style of his own, and I look forward with eagerness to his future projects. When he fully embraces his own expressive palette, his work is at its most powerful and compelling, not when he tethers himself, as he has here, in evident fondness and admiration, to the idiom of someone else.