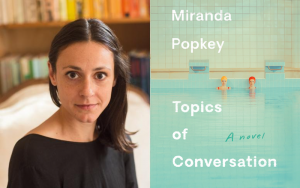 Miranda Popkey’s debut novel, “Topics of Conversation,” weaves a series of narratives over the course of the unnamed protagonist’s post-college life. Most take the form of conversations she has with other women: strangers, friends, her mother, and revolve, at least tangentially, around men. Popkey is interested in teasing out the ways (mostly heterosexual) women are conditioned to experience, or shy away from, desire, power and intimacy—an interesting exercise to be sure, though many of the stories follow a narrow line of powerlessness.

We meet the narrator when she is twenty-one, a graduate student studying English, on vacation in Italy with a classmate, serving as a nanny to the family’s twin boys. She fixates on her classmate’s mother, Artemisia, a stylish and accomplished woman who one night reveals the details about the disintegration of her relationship with her first husband. The story sticks with the narrator, who recalls it some twenty years later, not because of its content, but because in it, Artemisia had constructed a narrative that perfectly fit her idea of herself. The narrator hadn’t yet understood what Joan Didion put so succinctly: We tell ourselves stories in order to live.

For much of the rest of the compact, yet somewhat tedious book, the stories the narrator tells are excruciating. She makes bad decision after bad decision, painting herself largely as unlikable, which is refreshing in its own way. She’s not hiding or sweetening her mistakes (cheating on her husband, getting drunk and leaving her son in the care of a sitter for far too long); she’s not building up to a redemption story. Still, it can be hard to comprehend the things she rails against: a husband who is beyond understanding, parents who financially support her, and especially her son, who has done nothing wrong.

The narrator never finishes her dissertation, although she often reads as a privileged grad student. Near the end of the book, she’s hanging out with a group of other single mothers, mostly legal secretaries like herself, when she notes, “I do tend to think I’m the smartest person in every room and it doesn’t help that lately I have been.” Earlier, she and a friend poke fun at a Sophie Calle-inspired art exhibition, calling it “a little obvious.” They seem to be incapable of comprehending the artist’s vulnerability. Instead, they shun it with their aloofness.

The book’s conversational style also follows these lines of pretension. She includes the most damning details of those she wants to eviscerate, and is often wordy, with many asides and interruptions. How her mother downs four gin-and-tonics over the course of a single story. Or, describing a mother who couldn’t get her child to latch: “Not just her breasts seemed shriveled, her face, too.” She is cruel and cold, and incapable of real intimacy for most of the 200-plus pages, until very late in the game when she quits drinking, and allows herself to feel real tenderness for her son.

In the post-#MeToo era, this book seemed like it could be an interesting exploration of how women navigate sex and intimacy among societal conventions that tell us not to want sex, or not to seem like we want it, or to be impossibly smart and careful, never to get into untoward situations. Instead, this novel treads too-familiar territory, and our narrator never is able to have a healthy relationship with another adult.