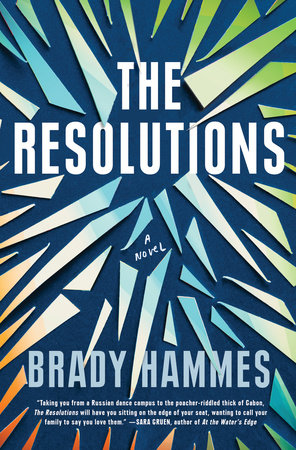 Brothers and sisters often go through childhood as a unit, sharing parents, sharing schools, sharing meals, sharing vacations. This shared life breaks when the kids become independent adults. The inevitable fracturing of the sibling bond manifests itself in different ways for different families, but one possible outcome is an almost complete dissolution of that closeness, that intimacy. That is the case for the three siblings in Brady Hammes’ novel, “The Resolutions.” Samantha, Jonah and Gavin Brennan find themselves in far-flung corners of the universe, each struggling with enormous life challenges; the sense that they’re in this thing together has faded to a speck, or a pale blue hint of true color.

Christmas brings them all home, or at least to the downtown Chicago condominium unit to which their empty-nester parents have relocated. Theirs was a suburban Chicago existence, and the fact that they reunite in a place close enough to their childhood Palatine home but with none of the familiar tokens and treasures, alerts us to a key dynamic: maybe you can’t go home again, but you can go back to a facsimile thereof.

Sam from an isolated community in a dense conifer forest outside Moscow, Jonah from the rainforests of Gabon, Gavin from Los Angeles via Taos—the three rail, drive, fly and Uber their way back into each other’s lives. This story is told in three alternating points of view, with each sibling building separate plots that eventually merge. The problems that must be resolved rank as serious: Sam’s descent from prima ballerina to washed-up dancer; Jonah’s grudging and terrifying involvement in the underground ivory trade; and Gavin’s double-double whammy of two failed relationships and acting gigs.

All three siblings possess keen awareness of their own problems and limitations, even if none have answers. Sam realizes “The architecture of her life” has crumbled. Gavin entertains the very real possibility that at thirty-one years old he might never become a successful actor and fears “a slow descent into irrelevance.” Jonah admits to himself that his intense field research in Gabon, in which he has accomplished very little, especially on his dissertation, might be “an effort to shirk the responsibilities of graduation.”

Importantly, each of the three characters thrives when taking on the responsibility for their siblings’ messes. Or maybe it’s that the three characters possess a well of strength and ingenuity seemingly unavailable to them until thrown into crises not of their own making. The resolutions upon which the story is structured act to shake up the complacency of their adult relationships, or as Gavin puts it, cause a “reckoning.” This family, whose privilege and stability did nothing to avert serious discomfort, resolve, once again, to be in this thing together.

“The Resolutions,” although filled with the kind of introspection that comes with failure, races at a high, enjoyable speed. Each sibling resides in a fascinating space. We get an immersion in the ballerina world, and a whiff of a certain Hollywood subculture, and a deep dive into the intense, consuming life of a field researcher. Drugs, extramarital affairs, murder and smuggling wriggle their way into stories about finding a true course, stories wrapped up in ambition, desire and fear. The settings, too, are interesting, not just Chicago but Los Angeles, Taos, Gabon and Russia. Each of the three points of view are distinctive, and Hammes nimbly works to ensure that these separate stories resonate with one another.

Ultimately, this is a novel about big life changes and the role of family in getting unstuck. The Brennans manage to get out from under their own wreckage and in the process gain a renewed appreciation for their shared lives, or at least some repurposed version of it.