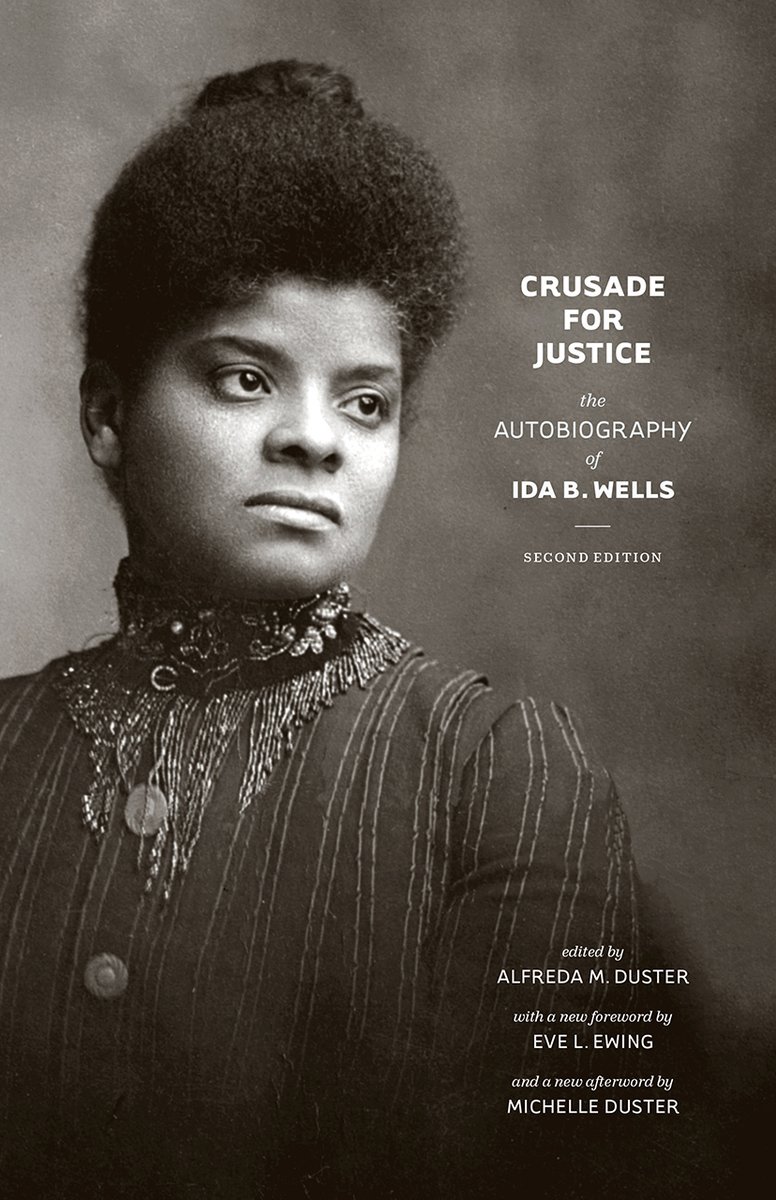 With the recent naming of Ida B. Wells Street in Chicago and the popular twitter campaign by former Chicago resident, author and activist Mariame Kaba, it is a welcome time to see a second edition of Ida B. Wells’ autobiography, “Crusade for Justice: The Autobiography of Ida B. Wells.” My first encounter with this book was a yellow-and-red-covered paperback checked out of the Chicago Public Library, a 1970 first edition edited by her daughter Alfreda M. Duster for the John Hope Franklin Series in African American History and Culture. Now, in 2020, readers get a little bit more than Wells’ amazing story as a journalist who started the anti-lynching crusade in the United States and overseas.
Wells was compelling as an eldest who raised her younger siblings when her parents were lost in the yellow fever epidemic. She started working as a schoolteacher at age sixteen to support them and herself. But this book chronicles what would become groundbreaking journalism and community service, which also entailed Wells’ involvement with the suffragettes and the Niagara Movement (which would become the NAACP). Wells started her own newspaper and became an extremely active public speaker to raise people’s awareness about lynching and what we would today likely call racial profiling. One of the key instances that she recounts is the murders of her friends Thomas Moss, Calvin McDowell and Will Stewart, black owners of The People’s Grocery Store, who were killed by a white mob in 1892 in Memphis. The book also chronicles Wells’ presentations at the World’s Fair here in Chicago, her travels to speak in the United Kingdom, and her work in opening a settlement house focusing specifically on black men, who were not welcome at such establishments, which further limited their ability to find work. As Wells documents these events, we get a clearer picture of how integral women like her have been to the “Lift as we climb” black club women’s movement, but also how black women’s activism was shaped after that.
This edition includes a new foreword by Eve L. Ewing, author of “1919,” which is the year that Wells wrote about for its extreme number of lynchings of black men and the riots during “Red Summer.” An afterword by Wells’ granddaughter Michelle Duster bookends this edition. Both women bring fresh insight into why Wells’ work is resonant today and how Wells’ work is still relevant. If you want a good understanding of why Ida B. Wells, who made her home here in Chicago, is a historically significant figure on a national and international level, then this is the book that proves a more inclusive history is necessary.
Crusade for Justice: The Autobiography of Ida B. Wells
By Ida B. Wells
University of Chicago Press, 417 pages