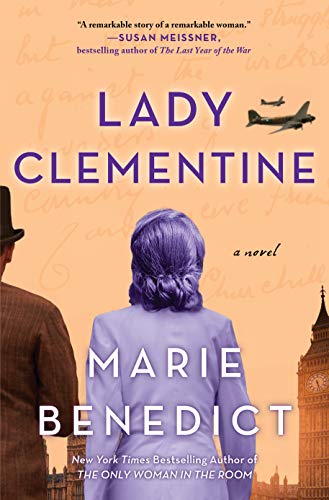 After reading Marie Benedict’s historical fiction about Clementine Hozier, the old saying that behind every great man stands a woman should be modified to say a determined, clever, ingenious woman. This novel formatted as diary tells the story wholly from Clementine’s point of view. Starting on September 12, 1908, the day she became Mrs. Winston Churchill, to May 12, 1945, when World War II ended, the book offers an intimate and engaging history lesson.

Marie Benedict’s Lady Clementine is not a fiery revolutionary, but a woman who is more than willing to work to advance her husband and push forward her own political ideals. Using letters that were assembled by the Churchill’s youngest daughter Mary, Benedict builds a picture that balances internal dialogue with historical facts. She brings Clementine’s voice to life.

The strength of Lady Clementine shines through, her heroism not constricted by the prism that is usually reserved for women of power. Benedict delivers a fully realized character who is telling the mood of the era and her reactions to it. We share her self-doubt, her feelings about motherhood, the compromises she must make and her occasional mental lapses. Yet, the modernism of today is not applied so thickly that you would mistake her for a faux Gloria Steinem.

Benedict will even teach you some arcane words of those times. For instance, the word “fug” is not a typo that escaped an eagle-eyed editor. It also defies Google lookup by fetching a number of rock groups and the explanation of puffer fish sushi, called fugu. It will have you reaching for a full-sized Webster’s or even the Oxford English Dictionary to find the meaning of this perfectly placed gem. You may even begin to use it to befuddle others. Further reading will uncover others, which I leave for you to discover.

Benedict explains in her author’s note that research for her three preceding books of historical fiction led to this novel, which makes me want to read her treatment of the lives of Hedy Lamarr, Clara Kelly and Mileva Maric, women who made imprints on history by being women of genius but who were overshadowed by men who were important figures of their time. Were I a women’s studies or history teacher, this book would be on my reading list.