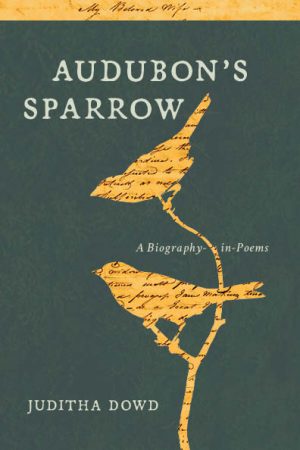 John James Audubon changed the field of ornithology in the 1800s by illustrating many of the birds that he tracked across North America, then gathering them in the historic volume commonly known as “Audubon’s Birds of America.” The story that most people do not know is how Audubon was supported throughout his process of creating his groundbreaking work. Juditha Dowd’s poetry collection “Audubon’s Sparrow” is not about one of the birds that he miraculously rendered on paper. Instead, Dowd reimagines the love affair and marriage between Lucy Bakewell and Audubon.

In these history-based poems, Dowd assumes the voice of Bakewell in diary entries and letters and Audubon himself appears in epistolary poems as well. The book documents Lucy’s growing affection and courtship with Audubon, but it shares some of the hard-fought stability that Lucy eventually struggled to achieve for herself and their children as Audubon traveled throughout the country to create this masterpiece that made birding a documented practice.

Many of these poems assume the language of the historic conventions of the time and are formally similar, but the story is compelling because a reader will hope for Lucy’s eventual sense of peace. Even though Audubon had businesses and financial resources when he proposed and married his young wife, he did not have a head for business, and it is clear that Audubon’s head was in the clouds that his flying preoccupations populated. He lost those businesses and left it up to Lucy to collect monies owed to him. Sometimes, the money just came. These stressors probably led to the death of their infant daughter, Lucy’s namesake, and perhaps also the restlessness of their two sons, who eventually traveled with Audubon as he continued to perfect his illustrations.

The poems don’t tell the entire story of the relationship, and Dowd offers a significant and uplifting note to the family’s overall well-being for some time after Audubon’s success, but we also learn of what happens to Lucy Bakewell as an older woman, and how Dowd perceived some of the documents that reveal her story. In terms of historically based poems, this might be a good companion to titles like Susan Ludvigson’s “To Find the Gold,” Nicole Cooley’s “The Afflicted Girls,” Julianna Baggott’s “Lizzie Borden in Love,” or “Miss Crandall’s School for Young Ladies & Little Misses of Color” by Elizabeth Alexander and Marilyn Nelson. Putting these books in conversation with one another and on the same shelves would create a formally diverse and more inclusive history for the lives of women from the past that have yet to be fully articulated in verse as the interest in historical poems continues.