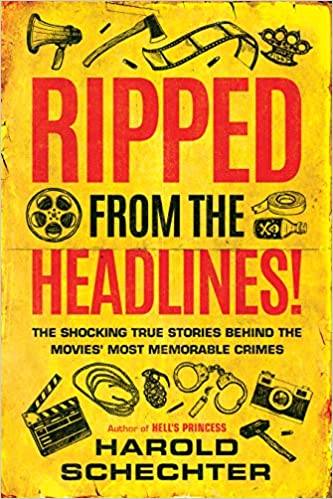 In the past, the exposure most people had to true crime came from newspapers, a few magazines and the occasional story on nightly news programs. This meant that you might hear about a case, but not find out the resolution or anything more than the most pertinent details. Before the internet and cable television, movies fed the public’s voyeuristic desire for inside information and judicial resolution. Harold Schechter’s “Ripped From the Headlines!” reveals how the truth is more sensational and more salacious than fiction. Schechter feeds appetites for detailed crimes and fleshed-out killers. He is no stranger to this segment of mystery writing, with a bibliography of twenty-one books, every one in a true crime subgenre of fiction, nonfiction or narrative nonfiction.

“Ripped From the Headlines!” is Schechter’s latest entry and tells the differences between actual events and the movie adaptations that they inspired. Arranged in alphabetical order by movie title, Schechter starts at “Alpha Dog” and outlines forty movies from 1927 to 2017, ending with “The Young Savages.” The encyclopedic treatment of cinematic true crime enables the reader to readily find favorites and locate some that might not have been considered part of the genre. Did you know “Butterfield 8” was based on a real case?

Schechter’s selection shows how, over time, the mores of society have changed. Earlier movies often left the sexuality of the characters out of the story, leaving the entire motives of some crimes muddled. Schechter offers new insight on the classic crime movies of the 1930s and 1940s, many of which were sanitized because of stricter enforcement of 1930’s Production Code after 1934, as well as customs of the times.

This treasure trove can also be enjoyed like an anthology. Each entry is a pithy gem of chilling details, adorned with folksy drawings of instruments of death. Bottles of poison, knives, guns, anchors, hammers, pitchforks and tennis racquets are as cunning and charming as the criminals they are associated with.

Schechter has done extensive research and knows how to fill in the blanks left in newspaper accounts. He contradicts the common belief that women are not serial killers, offering the backstory of “Arsenic and Old Lace” and the story of Roxie Hart. After reading his previous book of narrative nonfiction, “Hell’s Princess: The Mystery of Belle Gunness, Butcher of Men,” I appreciate Schechter’s equal-opportunity outlook on killers.

“Ripped from the Headlines!” is inspiration for mystery writers everywhere, a primer in how to modify a true story for any writing market. It should go on a mystery writer’s reference book shelf, between Kenneth Anger’s “Hollywood Babylon” books (and its followups by other writers) and “How To Write Mysteries.”