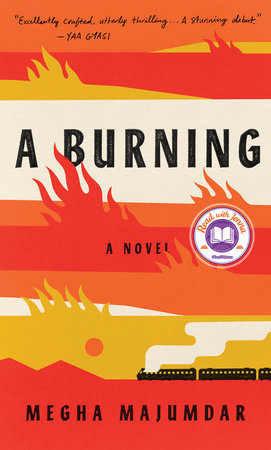 Megha Majumdar’s wrenching novel, “A Burning,” begins with an act of terrorism and an accusation. A young woman, Jivan, has the temerity to write online “a foolish thing. I wrote a dangerous thing, a thing nobody like me should ever think, let alone write.” Jivan is soon arrested for aiding terrorists in attacking a local train and killing over a hundred people. While Jivan is run roughshod through the Indian courts, we follow three parallel stories—one about Jivan and her family’s experience being evicted from their land by the police, living in the slums and desperately trying to improve their situation, another about Lovely, a vivacious acting student, and another about a school teacher, as timid as Lovely is bold.

Jivan, a smart and clever girl, tries to help her exhausted mother and father by teaching English. One of her tutees is Lovely, a woman from her slum who longs to be an actress. Lovely is a hijra, part of the trans community who provide blessings for babies and weddings in exchange for a small amount of money. Lovely is gregarious, witty and confident. Working toward her dream of being an actress, she’s learning English to improve her prospects of landing more roles. Despite knowing that there’s every likelihood she won’t be taken seriously by the police, Lovely nevertheless testifies on behalf of Jivan. Her imperfect English and saucy attitude provide welcome bits of humor in this unflinching tale, but Lovely is no comic foil. “For all my life, everybody is believing that I am having a direct line to god, but I am knowing the truth. Whenever I am calling god, her line is busy.”

“A Burning” illustrates the striking similarities between the way Jivan is treated by the court systems and how people of color and economic hardship are abused by the American justice system. Majumdar exposes not just institutionalized injustices but also the corrupting influence of capitalism on the individual. PT Sir, the gym teacher at Jivan’s school, is wooed by a political party whose image quickly tarnishes in his mind. The deeper he sinks into the party, the more his integrity leaks away. Like Lovely, he has to balance the optics of defending a person who has already been found guilty in the court of public opinion with what he believes is right. Lovely’s hijra house guru explains to her, “‘In life,’ she is saying, ‘I have learned that we cannot be having everything. For example. To be putting fish on the plate, we are having to sacrifice dignity on the streets. We are having to beg. Why? Because we would be liking to eat. To be left alone by the police, we are having to—well, I don’t have to tell you.’”

As in Arundhati Roy’s “The Ministry of Utmost Happiness,” Majumdar provides a glimpse into the rarified life of a hijra, amplifying the voice of someone from this often misunderstood community. In a broader sense, she angles the spotlight on the corruption of power, and what people will do to gain even a little bit more.