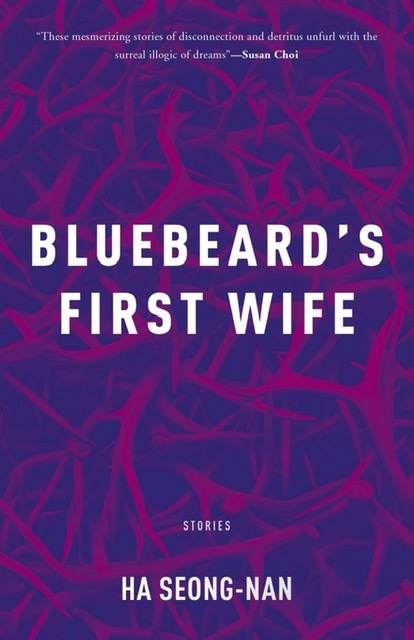 “Bluebeard’s First Wife,” originally published in 2002, is a collection of short stories from South Korean author Ha Seong-Nan. Ha Seong-Nan has won five major literary awards in Korea, including the Contemporary Literature Award in 2009. Her second collection finally got an English-language translation by Janet Hong, and was released in the U.S. in June. The passing of time is evident in these stories; so are hints of fairy tales. Some of these stories would be highly disturbing to fathom right now. They would fall under the horror category, whereas in this collection they are treated as life itself. In her hands, myths and fairy tales work as filters, bringing into clearer relief her actual subject: the horrors of daily contemporary life. In Ha’s book, you will see your most vulnerable moments clear and sharp and there is no fairy godmother, no knight will rush in on a horse.

Ha’s protagonists are nearly always unnamed, creating an eerie feeling of detachment. The stories lean on noir tropes of shadows and paranoia. The settings are bleak and gritty, and the ones which appear bright or cheerful do so only to disguise something sinister. It is a strange collection: often scary—but veering on the edge of something going disastrously wrong. The funny or eerie thing is that things do go wrong, but are not treated as such. They are treated like life or prompt a blasé it-is-what-it-is attitude.

The stories are varied, all equally creepy: in one story, a woman parties with her fiancé and his three friends and wakes up pregnant—the husband leaves her because he accuses her of being characterless while he does nothing to stop his friend from sleeping with her. The woman never finds out the father of her child and lives “happily ever after.”

In “A Quiet Night,” a husband, frustrated by the noise caused by the upstairs neighbors’ children, says he wants a Pied Piper to come to take them away. The narrator-wife is amused: “It seemed my husband didn’t remember the ending of the fairy tale. Not all the children followed the Pied Piper of Hamelin. One child was lame and could not follow quickly enough. Even if the pied piper should come, at least one child would remain and forever torment our sleep with the thump of his crutches.” Surprise, surprise, children start going missing. The wife has to sit with what her husband is capable of. That is where the story ends. No judgements, no poetic justice. Just a camera moving through these lives, detached.

It is precisely the detached coolness of Ha’s voice that is disturbing in conjunction with the grotesque facts she outlines. In an ideal world, these are stories that would be in news, but Hong’s translation treats them without a hint of sensationalism. She lays them out for us to offer our own verdicts.

There is sharp, penetrating imagery, sinister reminders of everyday evil left unchecked or ignored. At the center of these stories are women who suffer, or are gaslit—reminiscent of the women in Elena Ferrante’s novels or Carmen Maria Machado’s—domestic surrealism, a genre I would like to see more of. These stories are scary because they are true. Creepy because it can happen to you. But also extremely dissatisfying because they are picked up and left without a resolution. The protagonists are just living their lives without any actual conflict resolution—to be honest, that happens in real life too but to read that in a book of short stories felt particularly unjust. The speaker-victim-women are not directly involved and have no control over what is happening to them.

Curiously, Ha also turns a cold, penetrating eye on the idea of the “scorned men.” It makes her place as a crucial voice in the feminist fiction scene in South Korea evident. Her stories, along with ones of Han Kang (“The Vegetarian”) and Cho Naam-joo (“Kim Jiyoung, Born 1982”) play out in highly patriarchal landscapes, where fear and shame become very much a part of women’s subconscious.

“Bluebeard’s First Wife” is surreal yet familiar. It mirrors our worst nightmares—outlines what lies behind closed doors but also asks whose fault it is when we choose to enter. It is impressive. It is uncomfortable.