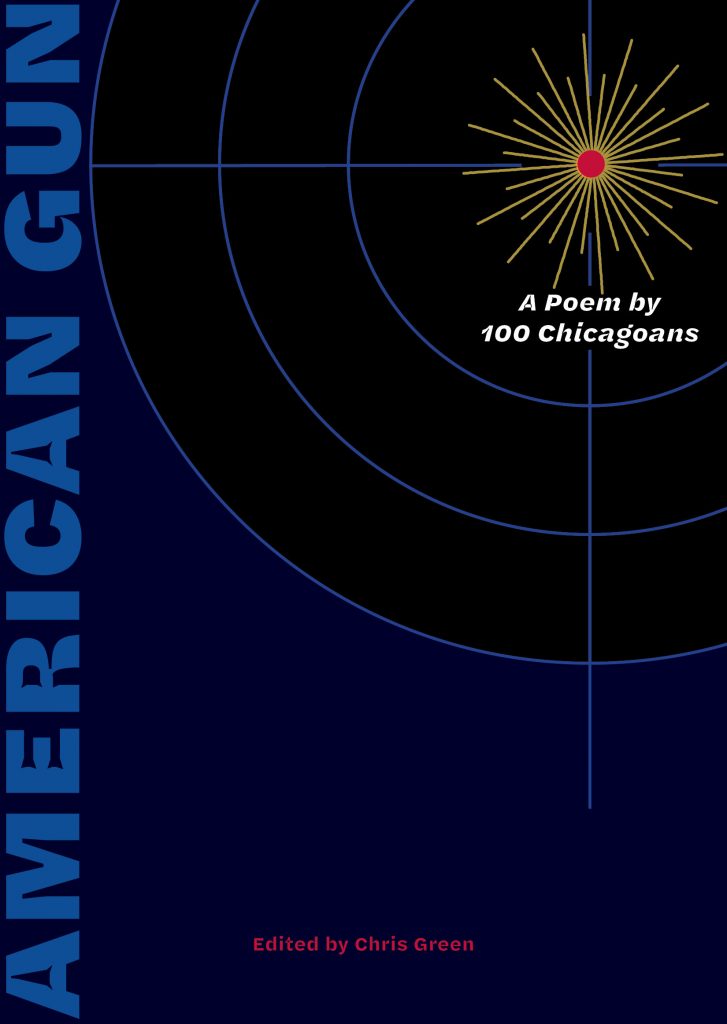 “American Gun” is as much an experiment in communal response as it is a poem. Editor Chris Green plays the role of mad scientist, beginning with the question, “What impact does gun violence have on us Chicagoans?” From that baseline, Green goes about finding truths about the impact of gun violence, everywhere, but especially here. He recruited one-hundred distinct poets to contribute a single stanza to a book-length poem. The guiding rules Green imposed were that each stanza adhere to the pantoum form (four-line stanzas where lines two and four of each stanza are repeated as lines one and three of the next stanza) and that the collaboration follow the “exquisite corpse” technique (in which a poet only sees the stanza preceding their own).

The result of this experiment is mixed, but only when compared to traditional book-length poems. The poem is not always cohesive and the quality is uneven. The narrative thread zigs rather than zags. But the positive results overwhelm minor defects. When you study the poem, you notice and appreciate these flaws that upon reflection might be beauty marks. What at first appears halting, like avery r. young’s relatively long lines that force the layout to shift horizontally, on closer inspection, become exciting. Anything can happen here; that is the spirit in which the poem was conceived and is ultimately read.

The poem begins with Green’s own stanza:

“Many by now are dead again, the boy-men.
Their lives echo from the sidewalks.
Somewhere near the black river & bare trees
sirens are converging.”

This sets the tone, as was Green’s intention. That first stanza contains not only the chilling image of death, but nearly every word—again, black, bare—challenges the reader. That this sickly tragedy, its details murky, seems perpetual. It’s discomforting that the tepid response horrifies.

We have entered the world of this experiment, this poem. Ninety-nine poets will follow, united in their relationship to the city, but people with distinct, varied experiences. These poets are Black, white, Latino and Asian. They come from the South Side, the West Side, the Gold Coast and the suburbs. They range from old to young, prominent to little-known. There is a wealth of talent in this poetic collective, and every line shows an abiding seriousness about life, justice and citizenship.

Jacob Saenz’s contribution, a little more than halfway through, goes:

“Above the red ash of asphalt,
a mother moans & holds a heart-shaped balloon
crackling through the silence. Stains of the city
reveal themselves beneath grieving flowers.”

This stanza, like many others, personalizes the violence, and as did Green and others, Saenz uses language that demands wider interpretation. The stain, literal and metaphorical, encourages us to look at this death as the symptom of a pandemic of which Chicago bears the shame and liability.

In part, this poem confronts Chicago, and other similarly challenged cities, to do something, to be better. There is wisdom and urgency in many stanzas, including one by Haki R. Madhubuti, who writes:

“the silence of the dead continues, eerily accurate
insisting that poets, the freest of creative artists recognize
there is the will to fight and the written will of death
is refused, revised life-messages for children, insects; the planet”

To fight, or fight back, weaves its way through the poem as a trope but perhaps rising to the level of theme. Given the nature of the poem’s creation, rhetorical strategies guide the message less than instinct. What we see over the course of one-hundred stanzas are poets instinctually trying not only to find their way into the violence (understand and document it), but to find their way out of it (some kind of solution).

Sara Salgado, one of the younger poets, writes:

“We pray to ancestors because God’s line is too busy.
My love will always live here despite plato o plomo,
And when it is our time, we sit with hollow point shoulders ready for our last supper.
I want my city to be beyond the taste of bullet, to dance in the veins of neighborhood lines careless.”

Young, unheralded writers—students—take over the last quarter of the poem, another seismic shift that in a traditional poem might cause complaint. Again, though, the impact defies expectations. In transitioning from the sophisticated artistry of acknowledged masters such as Edward Hirsch and Ed Roberson to the raw earnestness of apprentices, the poem increases the unfettered emotion needed to bring this poem home.

James Lofton, a seventeen-year-old who in his biographical statement said that his goals were “to graduate and advance in my career,” penned the last stanza, a poignant bookend to the opening image of another death and the belated response to it. He writes:

“Tried to go to the police and start singing
Dropped out of school start slinging
He went to jail and turned to the beast
There are guns in the street, there will never be peace”

This poem cries for repeat readings. It should be read once like a normal poem, entering the poetic landscape that operates more like a chorus (in tone, rhythm, pace and style) than the narrative it appears to be. It should be read a second time more slowly, absorbing each distinct stanza, noting the switch from one author to the next. In the first reading, there is drama and heartbreak in the intensity of images and emotions. In the second reading, there is pleasure in seeing an experiment unfold.

This is more than a long poem. It is a book. Every part and parcel of this creation adds quality and depth to the reading. The index, including short biographies, provides a crib-note examination into Chicago’s contemporary poetry landscape. The study guide—in so many other books a mere marketing tool—allows readers, especially but not exclusively younger ones, the opportunity to elevate thinking about the serious subject at hand. The resource guide provides tangible and specific opportunities to take action against the onslaught of gun violence. Even the layout and art choices—the shifts from black to white, the blood-drop facsimiles, the cluttered and stark pages that oppose each other, the shaded gray bylines—contribute to the overall experience.

An experience. That is what you get with “American Gun” and that is the result that makes this experiment a success. For many, gun violence—so many lives ended and altered, so many communities shattered, so much fear and frustration—does not fully register as an ongoing pandemic. The sheer velocity of the reporting, the coldness of statistics like those laid out in the book’s introduction, reveals a kind of callousness. Green and his one hundred poets, this manufactured but willing community, have created an occasion where readers must linger and consider and react—instead of moving onto the next news item.