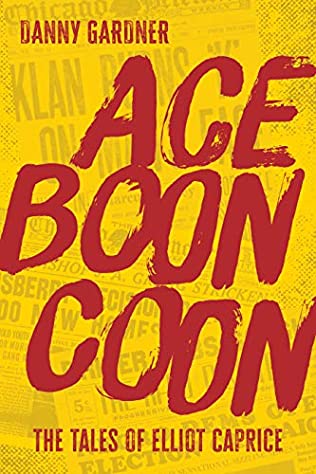 “Ace Boon Coon,” Danny Gardner’s second book in “The Tales of Elliot Caprice” series, is a detective novel set in 1950s Chicagoland, with all the elements of a satisfying noir. Private detective Elliot Caprice, former Chicago cop and World War II veteran, has returned to his rural childhood hometown of Southville, Illinois. to help his uncle with the family farm which is tottering on failure due to drought. Hoping for rain to bring in the string beans, Elliot takes a quick job to serve a summons in Chicago for a divorce case.His half-day job turns into weeks of murders, investigations of a civic organization, revelations of family secrets and old grudges, articles in the Black newspapers, squabbles with the Irish mob, and not one but two love interests, Elijah Muhammad and the Nation of Islam, the University of Illinois planning committee, Jewish hoodlums of Maxwell Street and Greektown thugs.

Southville is filled with Black migrant workers who are harassed by white farm workers and outside agitators. Tensions erupt into riots, with state police and FBI adding to the mayhem. It shows how Black, white and Jewish people built a haven where they can squeeze out a meager existence of tolerance in the shadow of Chicago’s highly segregated reality and how easily the balance can be disrupted.

But this isn’t only a story of the interplay between Chicago and Southville. It’s also how Elliot navigates a world where race taints every interaction. Light-skinned, able to pass as white, knows and identifies as Black. Gardner subtly shows the mistrust and jealousy Elliot experiences from Black people, the automatic acceptance of white people who do not know his background and the tense camaraderie of ethnic groups who share his tangential place in the white supremacist society of that era. Two slang phrases used in the book—”get in where you fit in,” meaning find your niche and use it to your advantage and the title phrase “Ace Boon Coon,” which means better than best friend—define Elliot’s internal struggles.

This book is a tour of racial division, scrambling for power, real or imaginary or transient, and the unfortunate results that stem from divisiveness. In today’s political and racial climate, it is a cautionary tale crafted in the spirit of HBO’s “Perry Mason” series. Perhaps Elliot Caprice will be brought to a screen in the near future.