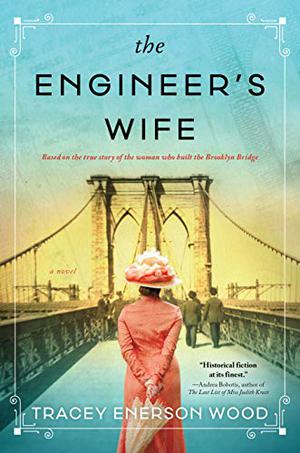 Historical fiction is a love/hate affair. Purists dislike the expansion of facts by the imagination of the author. Fans of the genre enjoy being in rooms where it happened, even if the words are not the actual utterances. In historical fiction, it is the author’s job to interpret the person into a character that they can speak for, create a world from the facts and circumstances. Some rely solely on their creativity to put the insights on the page. Tracey Enerson Wood uses her life experiences to fill in the blanks with her novel “The Engineer’s Wife.”

Reading about Emily Warren Roebling, the mother of the Brooklyn Bridge, is an eye-opener. Roebling became the de facto chief engineer because of her husband’s job-related disability and his Civil War post-traumatic stress syndrome.

Emily was the tomboy of her Cold Springs, New York family. She is a striking woman, an expert horseback rider and extremely agile. Her oldest brother is a major general in the Union army. Near the end of the war, she travels to Washington, D.C. to attend a ball given for the wounded where she meets her brother’s aide, Washington Roebling. After the war, they marry. Coming from a family of steel fabricators and bridge builders, he returns to his work as an engineer. Instead of settling down to housekeeping with the women of his family, Emily insists on going with him and his father to build a bridge over the Ohio River. As a military wife, Wood knows what it feels like to be the new woman in the neighborhood, one that will be leaving when the assignment is over. From her time as a nurse, she knows how to be support staff that can step up on a moment’s notice to save the day. She understands Emily’s position in life, giving the story good bones, flesh and sinew.

Were I a history teacher, I would use this novel in my classroom. Wood includes in her afterword an extensive essay of the differences from recorded history and her book. For book club and other readers, there is a conversation with the author. All in all, a satisfying experience.