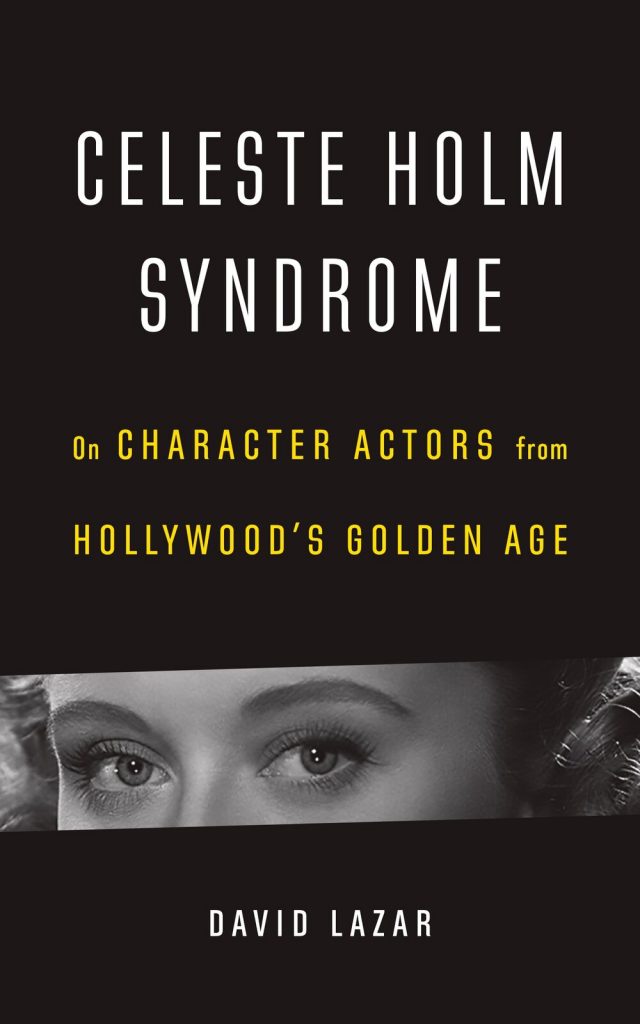 What does it mean to be a cinephile when movie theaters are closed? How can celebrities practice their celebrity as public space changes dramatically? For David Lazar, the answers lie in the essay form as he sets his sights on character actors. In his fourth collection, “Celeste Holm Syndrome: On Character Actors from Hollywood’s Golden Age,” Lazar takes us back to the Golden Age of Hollywood as he explores the concept of character, not by focusing on movie stars such as Fred Astaire or Jimmy Stewart, but by writing on the actors on the sidelines, those perpetually cast in supporting roles, like Thelma Ritter, Eric Blore, Oscar Levant and, of course, the eponymous Celeste Holm. For Lazar, there is so much to learn on being a character and having character, of constructing and leveraging a persona, which he shares with us in the eight essays in this collection.

It is important to note that the scope of these essays do not begin and end with film. Instead, Lazar integrates philosophy, psychology, literature and memory into mesmerizing prose that examines what’s both on and off the screen. For instance, in “My Two Oscars: On Wit and Melancholy,” Lazar juxtaposes the life of actor Oscar Levant with the writer Oscar Wilde, both brilliant wits with terrible love lives, while also exploring the roots of melancholia according to Aristotle, Freud and Montaigne. Furthermore, in the title essay, Lazar employs the male gaze in an attempt to subvert it, through observing and then rejecting how male protagonists from a wide range of films from “Gentleman’s Agreement” to “The Sound of Music” take advantage of older, independent women only to leave them for ingénues. Finally, in “Ma,” what is perhaps the book’s most tender essay, Lazar reflects on the death of his mother when he was a young man and the surrogate mothers that he attempted to find in film. These are just a few examples where cinema serves as an essay’s starting point, only to move in new and surprising directions.

Like Lazar’s other books, you might need a dictionary to read this one—as well as IMDB. Not one to overly explain, Lazar does not provide endless exposition on film synopses or actor biographies; instead, his writing is built around impressions, on the indelible marks a performance can leave behind. To keep up, you’ll need to leave the essay often and find your own facts, to pull up Google Images and check if an actor matches Lazar’s description. “Celeste Holm Syndrome” is peak essay material, where meaning is not only on the page but through digressions and discoveries beyond it.