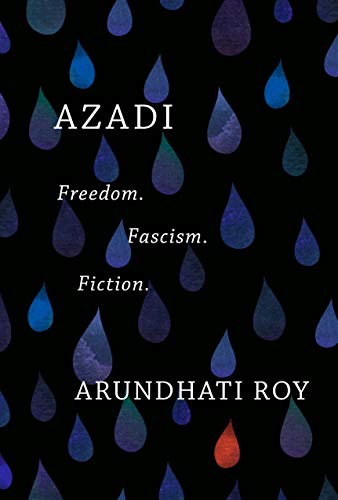 Arundhati Roy is polarizing, as any person speaking truth to power is. The author of the Booker Prize-winning “The God of Small Things”; “The Ministry of Utmost Happiness”; the essay collection “My Seditious Heart” and her latest essay collection “Azadi: Freedom. Fascism. Fiction.” manages to speak, lament, question and build on her past work. Yet this book holds more pain than her previous work, so much heartbreak. How dare a non-Hindu woman become famous, win all these awards, and manage to become the voice of reason in a country like India? Roy reminds me of Baldwin when he said, “I love America more than any other country in this world, and, exactly for this reason, I insist on the right to criticize her perpetually.”

Roy’s latest is a collection of nine essays that have appeared in publications in the last two years. Some are lectures. They all hold repeated motifs. Roy is a seminal voice on India’s Nazi-adjacent RSS (Rashtriya Swayamsevak Sangh), what she calls the “mothership” of the BJP (Bharatiya Janata Party) government. She also talks about India’s invisible but tightly wound caste system, which remains firmly in place. Roy was my introduction to the diabolical normalcy in which the caste system governs behaviors, whether we are aware of it or not. Another lament, a motif is India’s need to pin anything that goes wrong to its Muslim population. But something dangerous emerges about the country when all of these essays come together. They repeatedly demonstrate, in simple language, how the country’s institutions have been colonized by the current nationalist government. As terrible as Prime Minister Narendra Modi is, the more toxic aspect of it all is how every institution has been gnawed and gulped down. The media, the supreme court, schools, colleges, medical institutions, all speak the fascist language and dissent is the national crime, or anti-national sentiment. Roy has been documenting that change. This book is the evidence.

Roy’s cry for an Azad Kashmir, a free Kashmir, in her essay “Silence Is the Loudest Sound,” feels like it represents the whole silent state and the forced communications blockade. Azadi, the word has become a battle cry against the government right now, all across the country. A Bollywood movie has also used it as its soundtrack. Roy describes how that battle cry originated in Kashmir, in 1990, and the price a Kashmiri pays for crying out Azadi—something I learnt more about from Basharat Peer’s “Curfewed Night,” a book with more about the conflict there.

India’s problem with Roy is her act of witness. She looks, talks, asks, and documents what ground reality looks like for most of India that doesn’t make it to international news. She displays India in all its gory indifference and capitalist land expansion. Her version of India is not pretty. Not sellable, not investment worthy and definitely not one worth living in as a minority. The fact that she writes it all for an international audience is the crime.

Why this book, why now, when her previous collection of essays was published just last year? Since 2018, India has shifted on its axis. The country is home to hatred, revenge, nationalism, gunda raj (mobster violence), open violence, rapes, deaths, threats and all that is on display. We are a nation, openly violating the constitution, without any consequences to the people doing the harm. People have been protesting, journalists have been documenting, artists have been making art—all in resistance. Kashmir has been silenced, literally. The country has seen a radical shift in its being and these essays meticulously investigate them all. This book feels necessary in the country’s history making. The collection ends with her famous essay titled “The Pandemic is Portal.” Roy says “As we pass through this portal into another kind of world, we will have to ask ourselves what we want to take with us and what we will leave behind. We may not always have a choice—but not thinking about it will not be an option.”

On the release day for “Azadi,” Indians on social media gathered to cancel her, because Roy said at a recent Haymarket Books event that she does not identify as Brahmin. In spite of attempts to cancel Roy, calling her far-liberal, a disappointment, and fallen from grace, she dares to bear witness, critique, and say the country is failing. “Azadi” is necessary writing. As always, Arundhati Roy is prepared to be unpopular with the political systems that she challenges.