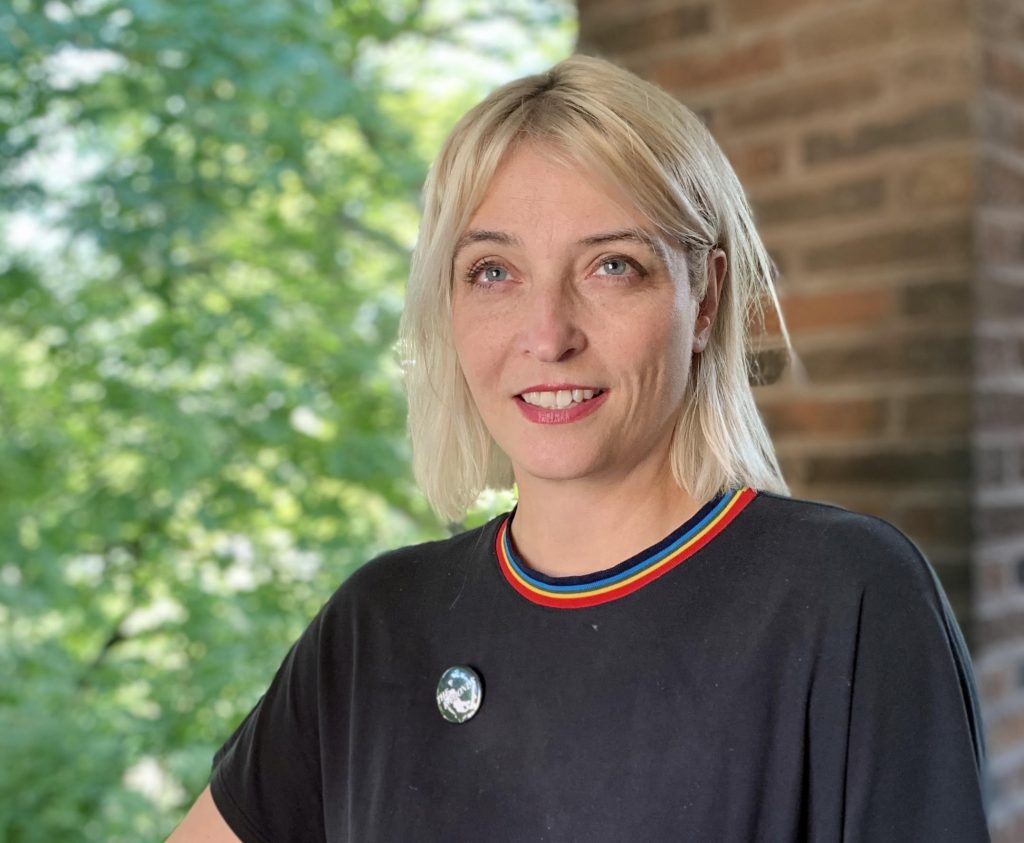 Christen Carter has been one of the main people at Busy Beaver Button Co. since it was established in 1995. In addition to buttons for bands and everyday clients, the Chicago company has made buttons for the likes of Dunkin’ Donuts, Sub Pop records and the Women’s March. To expand upon a love and appreciation for the love of buttons that graced shirts, denim jackets and backpacks, Carter partnered with fellow button collector Ted Hake to share a visual history of the pin-back button that explores how the devices shape and document politics and history with “Button Power: 125 Years of Saying It With Buttons.” In our brief exchange, Carter talked about some of the unique buttons in the book and her collection, as well as what’s next with Busy Beaver and the Button Museum, which she co-founded with Joel Carter.

How did you and Ted arrive at the circle of buttons describing different types of power? Was it a matter of the title influencing the design or just seeing the buttons? It’s a striking image to see those sometimes-opposing powers aligned.

That was the crew at Princeton Architectural Press who decided to showcase those buttons in that way. Ted and I had many different groupings of button-y items to potentially use as splash pages. The editors and designer of this book are all super-clever—they also came up with the title. Ted and I had another one in mind, but agree that “Button Power” is perfect. I mean, the whole book shows how buttons have historically covered so much—politics, commerce, fashion, grassroots efforts, personal identity. That’s powerful for such a small item!

There’s a small button of Luna Park, a Coney Island amusement park, from 1905, that was just too detailed for the book. It’s an actual photograph that was drawn over and hand-colored of the main thoroughfare of the park. The detail is amazing. Within the spectacle of the park itself, you can see many people dining, a horse show, even a tightrope walker! Since Ted and I are serious collectors and like going in deep, I’d love to share more of the nitty-gritty stuff; the backstories and context of the buttons and more about the manufacturers. That might be more interesting to collectors, but we have photographs of about 2,500 buttons that didn’t make this book. Either way, we have another book in us! 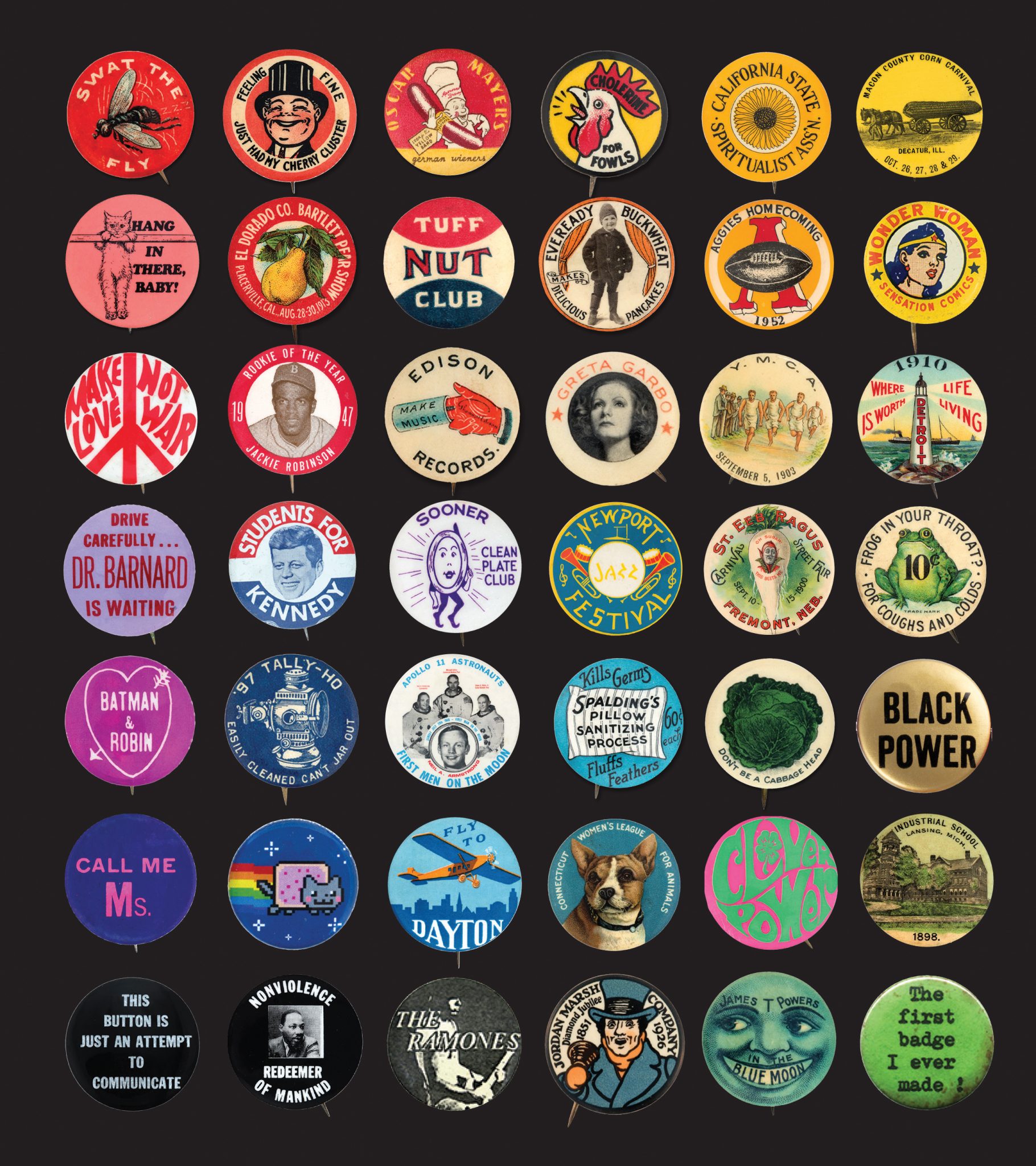 Which buttons did you absolutely have to feature in “Button Power”?

So many had to make it. We included some of our personal favorites in the “About the Authors” page. My very first button had to be featured, it’s of Snoopy and Woodstock on a unicycle while juggling. It’s kinda what started my attraction to buttons. Also, Roney’s Boys had to make it, they are the first band buttons ever, from 1903. A man from Chicago, Henry B. Roney, would teach wayward kids hymns and they would tour the country. Many groups would be on tour at the same time, playing parties, for inmates and even at the White House.

You started the Button Museum in Chicago in 2010. Can you tell us about some of the rare buttons and Chicago-specific buttons in the collection?

The museum has a couple of pre-buttons, meaning wearable messages that are part of the lineage getting us to the patent of the pin-back button in 1896. One is from George Washington’s inauguration and another from Abraham Lincoln’s 1864 campaign. One of the most valuable buttons we have features Oswald the Lucky Rabbit. It’s rare and more sought after since he’s an early Walt Disney character. We had two of the Oswalds, so we sold one and bought both the Washington and Lincoln pre-buttons with that money.

Are there buttons that have been elusive that you wish you had or could find?

I’d like more suffrage buttons. They made a variety of beautifully illustrated buttons that are green and purple and while the museum has a few great suffrage buttons, none of this variety.

One compelling aspect of “Button Power” is how it offers accessible insights into American history, and it subtly points out how buttons serve as propaganda to support causes as well as function as wearable art that reflects the times in which they are created. Could you talk about that thread?

Buttons allow us to show our values in a meaningful, inexpensive way. It’s a considered effort for a person or organization to share ideas to build community. They have to come up with a succinct message to graphically represent the idea in a way that is quick to understand and compelling to wear. And then have them made, and distribute the buttons to potential wearers. The wearer is spreading the message by literally standing behind it. Then this item serves as a memento of the time and their feelings about this idea. Sometimes we get donations at the button museum. It is such a huge honor to learn about what was important to that person during their life. Once, a nun from Detroit who was a social justice activist from the 1960s to 1990s, donated her collection to the museum. Listening to her talk about what they all meant was so moving and connecting.

What are you planning next for Busy Beaver, the Button Museum and “Button Power?”

Great question! It’s such an odd time to make plans, so it feels more like attempts to feel out a plan. At Busy Beaver, we are digging into our communities more than ever to see how we can help each other out or just help. These conversations are so meaningful to me right now. Since the physical museum is closed right now, we are adding more and more buttons and articles to the website, buttonmuseum.org, where we’re up to almost 9,000 buttons. With the book, I’m curious to see how the world receives it after it comes out. I want to talk about it with everyone, so hopefully more of that!

Carter will be in conversation with Tobias Carroll for a virtual book launch at Pilsen Community Booksm which will be broadcast via YouTube Live on October 15, 7pm.