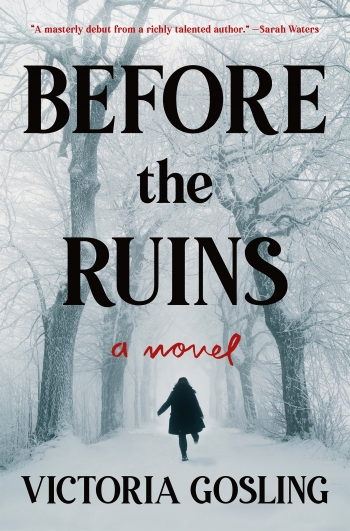 In Victoria Gosling’s “Before the Ruins,” five teenagers hung around a crumbling, abandoned manor house near Avebury, England, where a less-famous stone henge stands. The two girls and three boys half-heartedly searched for a diamond necklace that was lost decades before. The moody, gothic atmosphere enhances this very English mystery.

The girl that the small group looked to for approval and entertainment, Andy, has grown into a stable woman—a far cry from the abused and impoverished girl that found solace amongst her friends as a child. She’s also grown away from her friends—when Peter’s mother calls asking for her help to find him, she’s reluctant to get involved. She hints darkly about the past. “We’ve never really spoken about what happened at the manor. Not just… I mean all of it.” Poor Andy is trying to keep her bottled feelings locked deep down, but searching for Peter reminds her of her miserable youth, “When I was the rough kid with a kitchen-scissors haircut, hunched over my free school dinner.” Her friends provided a respite from her alcoholic mother and her abusive boyfriend, and “the game,” searching for the diamonds, was a pleasant way to wile away the hours, with the added fantasy that they’d be rich if they found them.

Gosling weaves easily between Andy’s youth and present-day Andy with her heels and financial security. The group of friends recalls that most-chased-after dream-group—the friends in Donna Tartt’s “The Secret History.” A chosen family for some, fierce and loyal, these friends provide what the world outside can’t and won’t. Unprotected at home, Andy feels safe with these friends, safe with their parents. At Emily’s house, a loving mother and sister provide a glimpse into another world. “Lady. Girl. Female. Woman. Each of the words made you feel a bit different, act a bit different, even, when it was applied to you. They weren’t the only words for us, of course, only at Em’s house it was possible to forget the other words existed.” Later she experiences the bounds of her gender even more profoundly.

As she stands in a dressing room, shopping for an outfit to impress, she looks in the mirror critically. “There was something archetypal about it. All those women, across the world—women in Paris and Moscow, Lagos and Sydney—women throughout time—at the court of Louis XIV, in Weimar Berlin, in sixties San Francisco—and all of them, having that moment, the moment of self-appraisal before their reflection. If the clothes passed the right code, if they accentuated what you had, if they disguised what you lacked: beauty, money, class, confidence, youth.” Gosling not only excels in writing a mystery steeped in British history, but a mystery of this woman—how did she overcome what happened to her as a child, how did she become this person she is now?

Before the Ruins
By Victoria Gosling
Henry Holt & Company, 288 pages