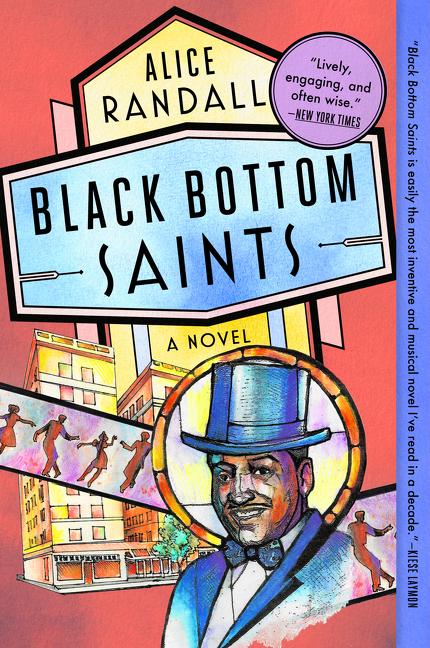 What do you do when you know that disease has overtaken you, that you have a medical death sentence that cannot be pardoned, but you don’t know the actual day of execution? If you are Joseph “Ziggy” Johnson, you write about all the extraordinary people you had in your life, doing profiles like the ones you read in “Butler’s Lives of the Saints,” a staple in Black Catholic households.

Alice Randall’s viewpoint always reveals how Black people triumphed against the tyranny of oppression, be it slavery, Jim Crow or simple prejudice. As in her New York Times bestseller, “The Wind Done Gone,” which was told through the eyes of one of the invisible slaves who inhabited the world of Margaret Mitchell’s “Gone With The Wind,” she discloses the story with literary finesse.

Ziggy Johnson was a real person. “Black Bottom Saints” is a wonderful hybrid of his life, the intersection of the author’s life, historical fiction and an act of tikkun (a way to put things right). You get more than just vignettes of people known and unknown, you get a glimpse of a world that thrived in the mid-twentieth century. The world of Midwestern Black folks, which stretched from Chicago to Detroit, which Ziggy calls Camelot, with Idlewild, Michigan in the middle as Eden, a resort area shared by the area’s Black population.

The Black Bottom was a Detroit neighborhood sprinkled with talent, intelligence and vivaciousness, a place of life, art and entertainment created by Black people for themselves when segregation ruled America, but heavy industry gave them prosperity and dignity. Naming himself and the regular folk the “breadwinners,” Ziggy brings the Black Bottom of Detroit back to life during his last convalescence, as a triumph over his death and the destruction and gentrification of today’s Detroit.

In his Arthurian-Biblical view of his world, other places of importance exist such as Harlem, Bronzeville, Las Vegas, Nantucket and Washington, D.C., but they are only mentioned. The Black Bottom is the center of his universe. To preserve the stars of his cosmos, he profiles each one in intimate detail, drawing you into a planetarium view of the nebula of Black culture circa pre-civil rights. Each one is defined by his or her actual name or stage name, whichever is most renowned, and like every saint in the Catholic pantheon, they are assigned patronages because of some relationship or attribute in their lives. For instance, did you know that Ethel Waters holds sway over twice-told stories, having your say and also abused children?

One gentle warning, every saint has their own libation recipe at the end of their profile. Regardless of the speed at which you read, do not attempt to drink them all, unless you have a field of mint, cases of Old Tom’s Gin with twin black cats on the label, copious bottles of miscellaneous champagne, several large bags of sugar and a liver the size of Texas. There are only three nonalcoholic drinks in the fifty-two profiles, representing a non-boozy Holy Trinity for cocktail-making: ginger ale, orange juice and fruit garnish.