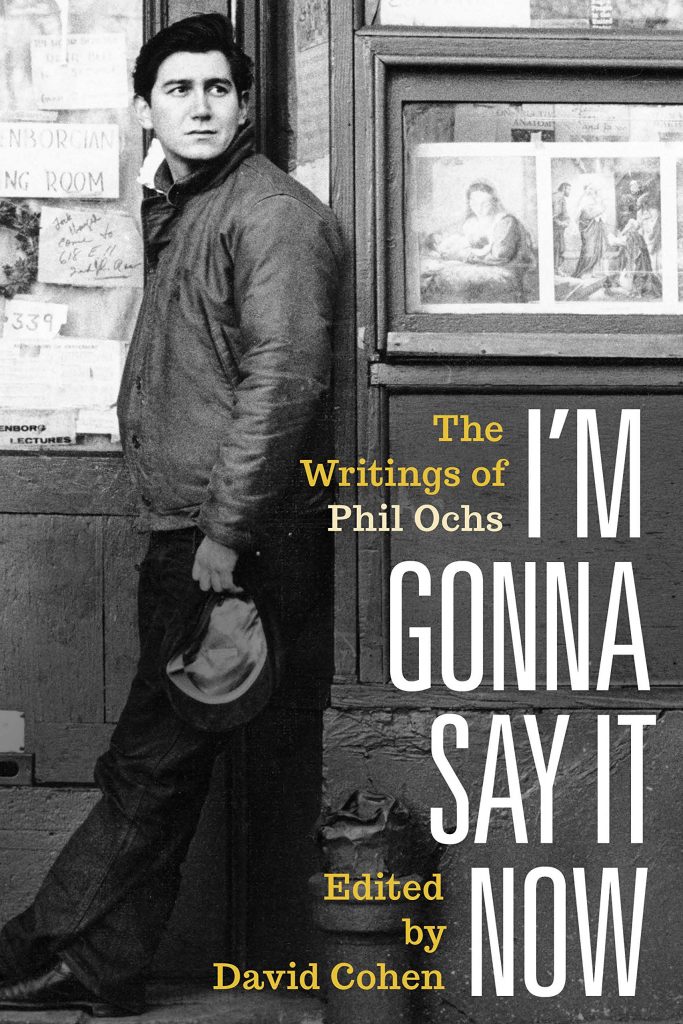 The late folksinger-songwriter-activist Phil Ochs will always have the misfortune of being bracketed with Bob Dylan, his fellow Greenwich Village troubadour who managed to escape the folkie ghetto and achieve the popular acclaim and critical adulation that would always elude Ochs. Reading “I’m Gonna Say It Now,” the collected writings of Ochs, one is struck by how different the two musicians were as artists and human beings, and how taken together they define so many of the tensions and directions of sixties music and culture.

Ochs’ generous, unstinting and not always reciprocated admiration for Dylan is one of the thematic threads tying together this potpourri of articles, essays, reviews, liner notes, poetry and satire, edited by David Cohen. Like Ochs, Dylan began as a politically engaged, topical songwriter, but graduated to a quasi-mystical, French Symbolist-inspired opacity and consequent superstardom.

In a 1964 essay, Ochs pinpoints the differences between the two talented, ambitious artists: Dylan “maintains the rebel image while speaking out on the moral issues of our day” and has “brought topical songs to a new height with the quality of his poetry.” Of himself, Ochs says with typical modesty: “Since I’ve had training in journalism, my songs are usually more specific [than Dylan’s]. I’ve tried to make use of humor to get my points across.” Dylan’s goal was to put poetry to music; Ochs would stick with lending poetry to headlines.

The first section of “Say It Now” documents Ochs’ early journalistic training at Ohio State University, where he also learned to wield the pungent irony that makes the politics go down.

What makes the book such an interesting read is the way the juvenilia here—his first two stories, written for the literary journal of Staunton Military Academy (“An Ideal Home School for Manly Boys”), and a panoply of features, straight reporting and burlesque written for OSU publications—hits many notes that echo across the artist’s more mature work. A 1961 feature on the then-popular Kingston Trio, for instance, includes the 1950s-style quote from a group member, “We don’t want to get mixed up in politics.” Three long years later, having “come out of [his] non-political shell,” Ochs says of the Kingston Trio and their ilk, not entirely fairly, that “they lacked any real depth in their material; it was a very sugary and superficial kind of folk music that reached a mass audience.” Similarly, a brief review in 1962 of Edward Albee’s “The American Dream” describes the absurdist play as “great theatre and… close enough to reality to be a truly educational and fascinating experience.” By 1967, a thoroughly radicalized Ochs is staging his own surrealist political theater, celebrating the much-desired end of the Vietnam War while in actuality the war was at its destructive peak. “We need a newer and more positive approach [to demonstrations],” Ochs declared in the Village Voice. “One outrage must answer another; only absurdity can deal with absurdity.”

As the revolutionary energy of the 1960s waned, so did Ochs’ own creative vigor, and his last few years before his suicide in 1976, at the age of thirty-five, were clouded by crippling writer’s block, alcoholism and mental illness. Always critical of showbiz vacuity and opportunism, Ochs nevertheless must have felt some regret about being left at the station as the success train roared past him, often with lesser talents aboard.

“I’m Gonna Say It Now” tracks the youthful triumphs and slow downward curve of Ochs’ tragically truncated life and career. It contains many gems and interesting curiosities, as befits the tunesmith who composed “Draft Dodger Rag”—perhaps the funniest antiwar ditty ever penned—as well as a songbook full of movement anthems and classic protest songs and ballads, including “I Ain’t Marching Anymore,” “There But for Fortune, ” “Outside of a Small Circle of Friends” and “Love Me I’m a Liberal.” By and large, his songs are touched with a humanity, depth of feeling and keen wit that remain fresh and provocative, and one can say the same of the lion’s share of writings gathered here.

Other gems here include his music criticism, printed in the mimeographed “Broadside” fanzine and elsewhere, which provide an informed and eloquent history of the mid-century folk music revival. His “Requiem for a Hootenanny” is a slash-and-burn attack on the TV folk music showcase that, in a last vile gasp of McCarthyism, refused to invite Pete Seeger—father of the movement—for his lefty politics. Unexpected pleasures include a fine tribute to Bruce Lee and a piece about running into 1940s actor and one-time pro wrestler Mike Mazurki at the dive bar Mazurki owned in L.A. While written with much more confidence and brio, it’s exactly the kind of profile he used to churn out a decade earlier for the OSU “Sundial,” and it shows that by 1973, Ochs had clearly and sadly come full circle. Of local interest is “Talking Chicago Jail Blues,” Ochs’ previously unpublished reflection on the 1968 Democratic National Convention where, along with his Yippie comrades, he was tear-gassed and arrested. It was the moment he lost faith in the possibility of changing America, marking the beginning of his decline.

“I’m Gonna Say It Now” has its flaws. Phil Ochs is not a household name, and the book would benefit from a biographical sketch or at least a timeline of his life and times. Also, editor Cohen has made the puzzling decision not to include interviews with Ochs (as opposed to ones by him), which would give us a clearer idea just who he was.

These flaws are at least partially redeemed by the book’s photo insert, with Ochs radiating a beguiling mixture of warmth, puckish humor, thoughtfulness and melancholy. He hung with hippies but was no hippie himself, staying the well-turned-out, respectful, somewhat reticent Midwestern kid he started out as. He’s a man with a mission but without the attendant self-seriousness. His weakest moments are when he tries to become Bob Dylan, his idolized rival, as in the liner notes to 1967’s “Pleasures of the Harbor,” which sound like a parody of a stoned Dylan doing a bad take-off of Allen Ginsberg: “From the razor’s edge of a Louvre of loveless beds a tone tossed across/an ocean of seas, pass the body please.”

Ochs’ charm and gift were his simplicity and moral directness, and when he got away from that, his confidence and purpose got away from him. In an early “Broadside” essay, Ochs states: “More than ever there is an urgent need for Americans to look deeply into themselves and their actions and musical poetry is perhaps the most effective mirror available… Every newspaper headline is a potential song, and it is the role of an effective songwriter to pick out the material that has the interest, significance, and sometimes humor adaptable to music.”

The need remains today. Where are the poets?