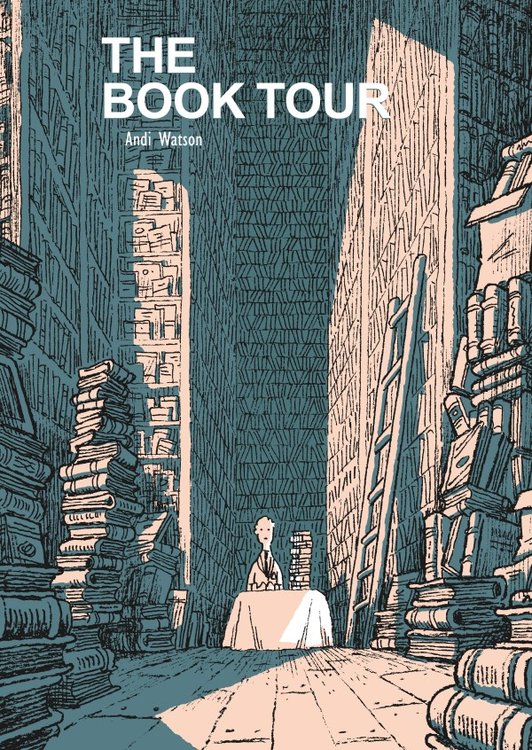 Spend some time around a novelist or two and you’re bound to hear horror stories about book tours. Though many readings are well attended and rewarding for both the author and the audience, when those events are held in remote cities where the writer doesn’t know anybody, after going through all the inconvenience of traveling alone, too often, attendance turns out to be negligible. In “The Book Tour,” a graphic novel by Andi Watson, G. H. Fretwell takes his new novel, “Without K,” on the road. Arriving in the big city, presumably London, he endures one miserably attended reading after another, while progressively suffering an increasingly lower-class grade of hotel as his publisher, who also seems to be ghosting him from an expected meeting, keeps extending the tour without explanation. Fretwell’s not particularly introspective it seems, mostly fretting about getting his updated itinerary, finding his next hotel, and where he’ll get dinner, preferably alone, usually steak. The story has all the makings to be as tedious as his existence is in this particular moment, but when one of the bookstore clerks goes missing and the police want to talk to Fretwell since he was the last person to see her, his Kafkaesque life (“Without K,” get it?) gets much more so, and the 272-page graphic novel comes to life as a bona fide page-turner.

Watson sets the book in some kind of timeless past version of a city, in black-and-white, where Fretwell always wears a sort of Edwardian suit, and analog telephones have rotary dials. The shops are the epic bookstores of the imagination, with shelves to the ceiling in infinite deserted aisles, echoing the streets of the city and its vintage edifices and equally empty streets. At times I imagined this was Jack the Ripper’s London, a notion reinforced by Watson’s vintage drawing style.

Watson’s a British comics writer who’s pursued an eclectic range of work, including some work for Marvel and DC, but most recently making work for the young-adult audience. This, apparently, is his first book for grownups in some time. I look forward to another.