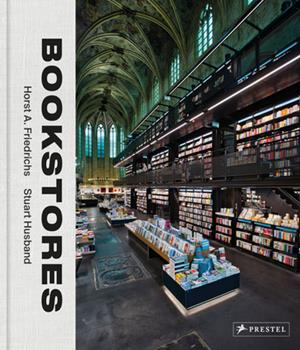 When I picked up this lush book of photos of bookstores taken by Horst A. Friedrichs, I had a few initial thoughts. One: bookstores contain books but here is a book that contains bookstores. Two, who would want to read such a book, which got me to thinking about two kinds of readers. Those who prefer the speed, simplicity and pricing of ordering on Amazon will have no interest. But the rest of us, those who love bookstores—for their community, their personality, their serendipity—will get lost in the best way in its pages. Organized by city, each “chapter” in the book features a short, generally engaging overview of a store by its owner or manager, followed by several pages of gorgeous photos of, well, shelves of books. That might sound monotonous, but for those of us who never tire of such environs, it’s anything but. Chicago is not included, nor are many American cities as the travel budget likely created limitations for the creators; the photographer spent his U.S. time in New York (The Strand and others) and San Francisco (City Lights and others). Otherwise it’s entirely Eurocentric, with its most extensive section about London, but that’s no quibble for those of us with travel appetites larger than our pocketbooks.

The love of bookstores can be inherently personal, and at other times, communal. I think, for example, of Sandmeyer’s Bookstore, across the street from me. It’s a lesser-known gem in a city rich with bookstores, but since Ellen and her late husband Ulrich Sandmeyer opened it in 1982, even before my arrival in Printers Row in 1985, it’s been a go-to for the entirety of my adulthood, especially for gifts. Here’s how it goes: I tell Ellen as much as I know about the person I am shopping for, rarely with any knowledge of their taste in books. And with the briefest of character sketches, she glides through her store, making custom recommendations that I trust without reservation and give with the knowledge that it might bring joy or even change a life.

My wife Jan and I are kind of bookstore tourists, too. Even though we own more books than we’ll ever read, we find ourselves spending hours in bookstores in every city we visit: Elliott Bay in Seattle, Book Soup in Los Angeles, and so on. I cherish the memory of my father’s last trip to his hometown of Fargo and the time we spent browsing in Zandbroz bookstore downtown. It was less than six months before the cancer took him, and he was neither vigorous nor very mobile. But somehow all of that disappeared for the hour or so we spent looking at books. After spending the first few minutes looking at shelves on our own, my dad pushed his walker over to where I was looking at fiction, and I told him about Karl Ove Knausgård, who I thought would interest him as a fellow Norwegian; my father became increasingly interested in his heritage as his life progressed. He responded by insisting on buying me “My Struggle: Book One,” which I am still struggling to finish. We struck up a conversation with the shop owner, and my dad expressed his interest in books about North Dakota history. With that, the owner let us into a back room filled with more books including a large bookshelf filled with exactly the kind of books my dad was interested in. He spent quite a bit of time going through them with me, telling me which he’d already read, and eventually choosing several. His eyes were degrading and the man who taught me to love books was losing his ability to read them, but neither of us was thinking that way that day; that day, we were book lovers enjoying a little bit of heaven on earth.

I have so many other memories set in bookstores, and spending time with “Bookstores” jars them loose. But though I’ve only been to a couple of the stores in the book, I am relishing so many with these virtual visits.

Maggs Bros. in London, opened 1853, says they are one of the “longest-standing antiquarian booksellers in the world.” Selling two Gutenberg Bibles and Caxton’s Chaucer is certainly notable, but Napoleon Bonaparte’s penis? That’s truly one-of-a-kind.

Heywood Hill, opened in London in 1936, is now co-owned by “Peregrine Cavendish, 12th Duke of Devonshire” and employs a team of six servicing their “A Year in Books” subscriptions, which are personalized based on a customer’s taste. Each of the six is tasked with reading well over a hundred books a year in order to craft these personalized selections.

Seminary Co-op would certainly be included if Chicago was one of the cities visited, but here, Maastricht’s Boekhandel Dominicanen occupies a thirteenth-century Gothic cathedral and gets a million visitors a year to what The Guardian called “the world’s most beautiful bookshop.”

Shakespeare and Company in Paris has beds among its bookshelves; “tumbleweeds” can stay as long as they “help out around the shop and read a book a day.” Thirty thousand have done so.

Word on the Water, London, is a bookstore on a boat. Mendo in Amsterdam sells its highly curated selection of photography, fashion, travel, architecture, design and culinary titles in a highly designed space. And so on…