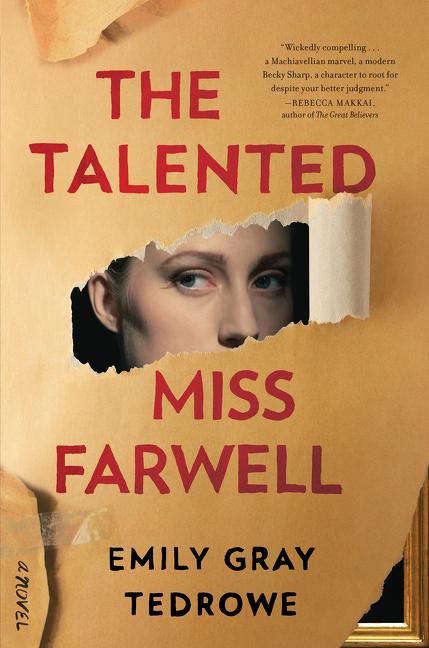 Becky Farwell is a precocious teen, gifted at math, in a rural Illinois town. She’s the kind of girl bound for an Ivy League escape, except that she’s helped her father turn around his farm-implement business and she can’t leave him to fail. So she forgoes college, earning a bookkeeping job with the government of Pierson, her hometown, at which she excels. But when she takes dad to a medical visit at the University of Illinois and visits an art gallery by chance, a hitherto undetected passion is ignited; she is overcome by a painting. Furthermore, she is overcome by the desire to own it. She does not have enough money, but she sees a way to get it, by using her specific knowledge of and access to her town’s bank accounts and financial processes to “borrow” the money without anyone knowing. Before long, she’s living a double life as Reba Farwell, with a Gold Coast apartment in Chicago and a burgeoning reputation for an eye for art and a brain for buying and selling at a considerable profit. But her town’s paying for it, with an empty swimming pool, wage freezes and an infrastructure that is crumbling page after page.

With inspiration sparked by the true story of Rita Crundwell, the Dixon, Illinois comptroller and treasurer who committed the largest municipal fraud in history by embezzling $54 million over a twenty-year period, and with a nod to Patricia Highsmith’s “The Talented Mister Ripley” and its irresistibly charming yet criminal protagonist, Chicago writer Emily Gray Tedrowe has crafted a vivid tale of two parallel worlds, each equally rich in character and color. Even as the scope of her crime grows, we can’t help but root for Becky, thanks to her earnest devotion to her hometown friend Ingrid and her can-do spirit in doing all she can to help her town raise the funds for its growing budget crisis, even if it’s a crisis that is completely the result of her addiction to buying and selling art (which she calls “The Activity”). And, for the record, she completely intends to return the funds to the town as secretly as she took them. If only some dealer had not shown her those Luc Tuymans that she had to own…

As in “Blue Stars,” her masterful novel about the impact of military life on families, Tedrowe is skilled at depicting, without condescension, the “ordinary people,” the kind of day-to-day strivers, some blue collar, some not, that make up much of America. Here the ordinary people are the folks around Becky in the town of Pierson, especially Ingrid, whose struggles with motherhood are fights that Becky (who strangely never takes up even a short-term love interest in a book spanning thirty-five years; her only assignations are transactional in intent) is happy to help her wage. In fact, in Pierson, Becky is kind of a perfect human being (except for that stealing part).

But it’s when she turns into Reba, puts on her Manolos and lipstick, and goes in for the conquest of the art world that the complexity of her character surfaces. Contemporary art, with its seemingly inexplicable market economics and, for some, equally inexplicable art, is ripe for the picking, with real-life characters you can’t make up and machinery built for spectacular frauds of all assortments. But while Tedrowe certainly has her fun sending up some of the excesses, she keeps it grounded in human nature. While Reba is at her worst here—when her mentor betrays her in grand fashion, she seems to treat it as a teachable moment and betrays several such friends in similar fashion down the road—she never loses sight of her love for the art itself.

If only she’d found that love in the museum, rather than the gallery.