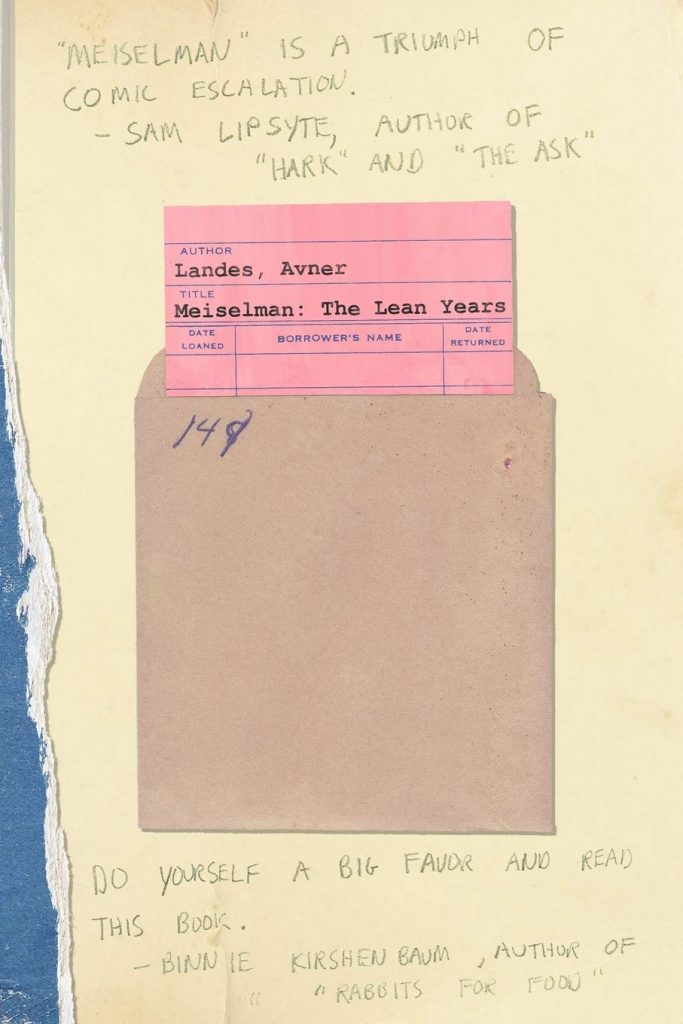 About midway through “Meiselman: The Lean Years,” the title protagonist’s put-upon wife declares to her slippery, passive-aggressive spouse, “Why does everything you do have to be… slightly off?”

That question hovers above each page of Avner Landes’ first novel, a lightly plotted, moment-by-moment look at one week in the life of an assistant librarian at the “New Niles” (read: Skokie) Public Library. The mononymous Meiselman is a White Sox fan and orthodox Jew, in that order, who grew up (if that’s the right word) in the northern suburb made famous by neo-Nazis and Jewish jokes. There he has developed into a creepy, sneaky narcissist who reeks of self-pity, yet is pitiless toward others—including his aged neighbor, a handicapped Holocaust survivor whom Meiselman unintentionally harms through his obliviousness, an act that induces neither guilt nor self-examination. Equipped with every criminal attribute except courage, Meiselman schemes, lies, whines and daydreams his way through his sordid little life, always stopping just short of the point where he might get caught and the story might get interesting.

Superficially, the novel resembles Kingsley Amis’ comic masterpiece “Lucky Jim,” a mid-1950s look at the British class system from the perspective of a junior academic of modest background seeking to get his foot in the door of an upscale institution that just doesn’t fancy his type. As with “Lucky Jim,” the narrative here moves toward a climactic public speaking engagement where Meiselman, dogged by feelings of victimization, finally gets to have his say in front of all those who, in his paranoid imagination, have squelched and slighted him.

But unlike Amis, who brilliantly captures the stifling pomposity and mediocrity of his provincial milieu, Landes lands relatively few punches. Meiselman’s head is too far up his own neurosis to notice anything beyond his perpetual sense of grievance at boss, wife, family, co-workers, rabbinical establishment and world at large, which stubbornly refuses to acknowledge his oh-so-subtle specialness.

It’s never clear exactly how this uniqueness manifests, except perhaps in the intensity of his kvetchiness, petty snobbery and easily triggered disgust. These qualities lie atop a disturbing, fetishistic sexuality that leads our married, thirty-something hero into stalking, in a safely deniable way, a punky teenaged library patron whom he only calls “the pink-haired woman.” His suppressed brilliance consists mainly of insipid inspirational quotes he’s pulled from celebrity biographies, including those of Colin Powell, Ray Kroc, Arnold Schwarzenegger and Lee Iacocca—who, incidentally, was primarily responsible for the exploding Ford Pintos of the 1970s. By the end of this novel, one begins to wish that the young Meiselman and his equally smug and obnoxious family had been inside one.

I suppose it’s an accomplishment of a sort to craft a work of fiction so profoundly offensive that it inspires thoughts like this. There are moments here where the sardonic voice works and the narrator’s digs hit their target, as when he describes the Skokie rabbinical seminary—whose austere campus this reviewer can see from his doorway—as evocative of “the miserable lives of refuseniks in the Soviet Union,” stained by a light “the hazy yellow of used cooking oil.” But the outer world of shared reality is not what interests author Landes, and the shtetl-like “New Niles”/Skokie he presents is not today’s Village of Vision, a more socially and ethnically mingled place.

In fact, the novel is set in about 2004, after the invasion of Iraq (which the narrator applauds) and before the re-election of George W. Bush (whom the narrator supports). There’s a good chance the manuscript has been sitting in a desk drawer for years, ripening away, waiting for the right moment to surface.

The Trump (and post-Trump) Era is that moment.

Meiselman, the damaged little man in his father’s shadow, who oscillates between crippling inner shame and outward grandiosity and snarkiness, is a proto-MAGA guy, a Talmud-trained believer who nevertheless lacks moral, spiritual and intellectual center. A dyspeptic aesthete, incapable of empathy or any other emotion aside from envy and resentment, Meiselman divides the world not between good and bad or right and wrong, but rather winners and losers, cool and uncool. Enmeshed in self-loathing, he seeks not remedy but retaliation for wrongs that can never be quite articulated. Meiselman’s universal hostility has a distinct orange tinge.

It’s perfectly acceptable for an author to select a sick puppy like Meiselman as protagonist (cf. Dostoevsky’s Underground Man), so long as the writer knows it and has some purpose in doing so. It’s not at all clear, however, that Landes—who has since writing this book settled in Israel with his family, according to the author’s note—either sees his own character clearly or is using him to make some larger point.

The question that this novel presents, finally, is not why does Meiselman always seem a bit off, but rather, why would anyone write a book so unremittingly sour and nasty? It smacks of payback. But an act of revenge like this, which never comes to grips with deeper issues, is at best satisfying only for the author, not the reader. Too mean-spirited to amuse, too cramped to edify, “Meiselman: The Lean Years” leaves us hungry for something less self-conscious and more self-aware.