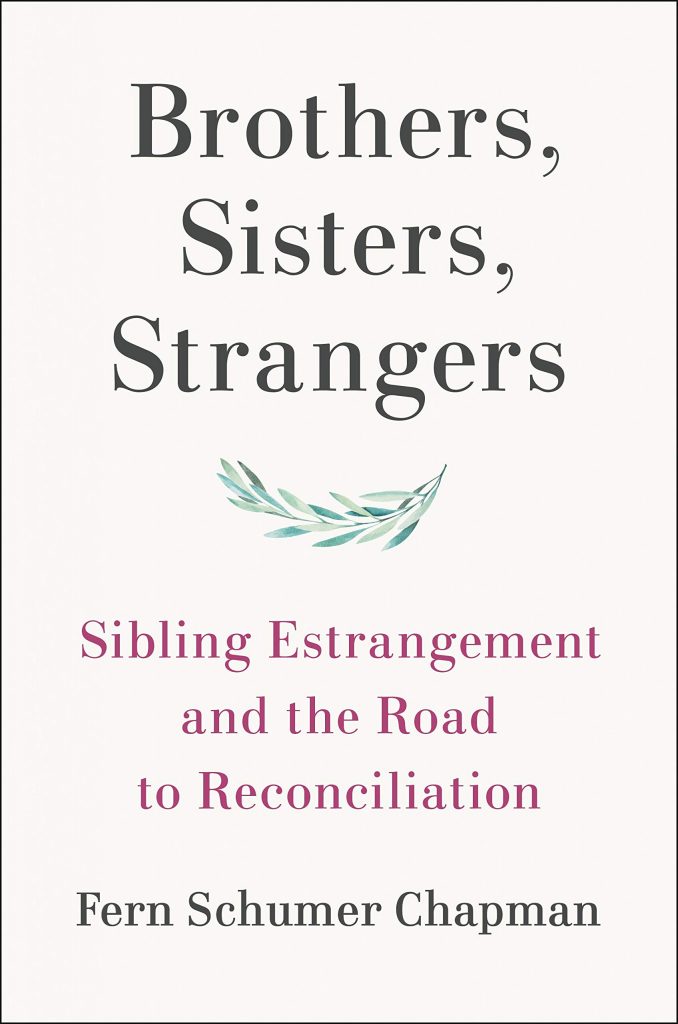 For more than thirty years, Fern Schumer Chapman and her only sibling—an older brother named Scott—barely spoke. The decades-long estrangement haunted Chapman and in this book—part memoir, part guide—Chapman writes about their journey to reconciliation. Through online support groups, research, interviews and field work, Chapman explores the issues that can strain familial bonds and the process for repairing relationships. Her surveys were never intended to be strictly scientific, yet the anecdotes collected reveal a near-universal sense of grief.

“Brothers, Sisters, Strangers” is divided into three sections—estrangement, reconnection and reconciliation—and explores factors that can lead to estrangement and exacerbate negative feelings from the long, intergenerational reach of family trauma to the effects of social media. Whether the rift comes as adults, over decisions for parental end-of-life care and fights over estate planning and inheritance issues, or, in the case of Chapman, fuzzy resentments from childhood, the stress can create a ripple effect for the entire family. When a branch of one’s family is removed, gone too are the shared memories. Chapman’s kids grew up without any connection to their cousins. There was always a shadow of either loss or impending stress for Chapman around important holidays and life events, and the pain of being shunned yet again loomed large.

Chapman and her brother were the children of a Holocaust-survivor mother and a driven physician father who pressured his son to follow the medical career path. Scott rebelled, and emotionally and physically moved further and further away.

As children, Chapman recalls they were good friends, so she felt particularly wounded that her brother lumped her in with her demanding father. She didn’t know what she had done or said to cause her brother to reject her. In therapy, it was revealed that Scott resented his sister’s ability to have a relationship with the father that he couldn’t stand to be around. It may seem simplistic now, but Chapman explores the family dynamics that allow emotions to warp and fester.

One particular moment made this reader wince for the author; Chapman was a guest speaker at a school book fair—a school attended by her brother’s children. At the conclusion of the event, she was directed to the treasurer passing out the honorariums to participating authors; it was Scott and he barely acknowledged her before turning his attention to someone else.

Losing the connection to her brother over the years was not something Chapman easily gave up on, but for her own self-preservation, she finally stopped trying. It’s their mother who coaxed her to reach out. Scott’s life was in crisis. For Chapman, the challenge was learning to forgive and listen. Given that she shares her internal monologue with the reader, which borders on sanctimonious, it’s a good thing she didn’t speak. It’s hard stuff, when you are trying to hear someone out, not to allow your feelings to drown theirs out. Not all relationships are worth repairing, and there are stories here of those who walked away from toxic relationships with a sense (after much therapy) of liberation. This wasn’t the case for Chapman and her brother, who were able to find their way back to each other. In the afterword, Scott writes how his sister probably knows him better than anyone. “I hope our story holds out the possibility—even for brothers and sisters who have become complete strangers to each other for decades—that they, too, might return by the road they came.”