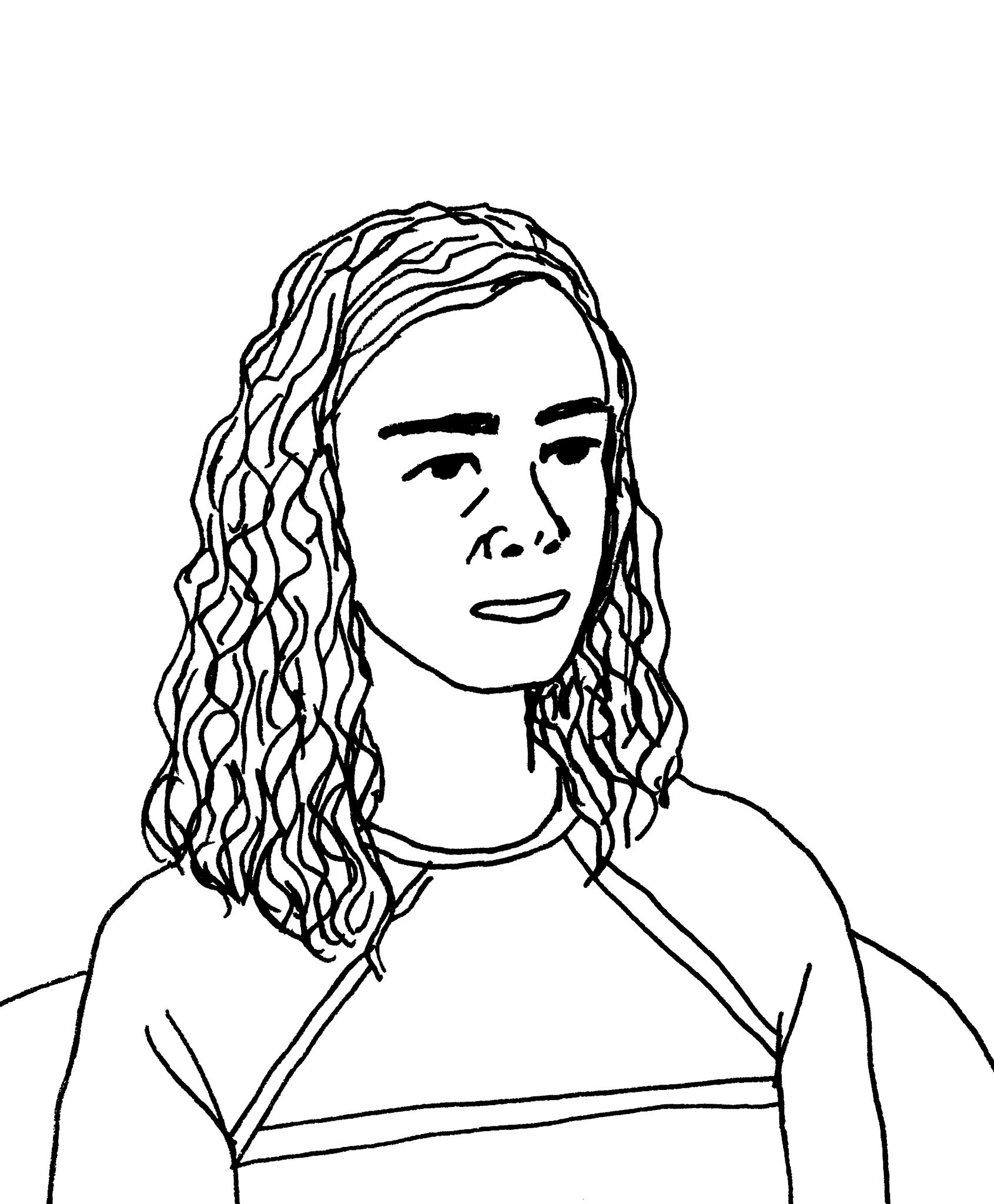 Keiler Roberts has a husband, a daughter and pets, a condition so commonplace that it hardly sounds like the material of literature. But in her comics, Roberts masterfully mines the humor and the poignancy in everyday life. You can’t help but laugh, nod in agreement and show your spouse pages in a spirit of solidarity.

In her new book, “My Begging Chart,” Roberts seems to be a good mom, very close to and engaged with her daughter, but she does not always think perfect thoughts, and it’s that raw, confessional quality that resonates. Her daughter Xia has an imaginary friend, like so many young kids do. Roberts narrates, “A nice adult would play along… But I see it as an inconvenience—even a burden.” Her character then says, “You can tell your little ‘friend’ to get out of my chair”… But soon, we discover that Roberts has her own imaginary friend, Batman’s sidekick Robin, who says things to her like, “Life has meaning” while she’s laying awake in bed.

Though she might seem sardonically detached, Roberts gives glimpses of her interior dialogue that run counter to that notion. Late in the book, on Mother’s Day, Xia says, “Don’t worry, Mama, You’re not ruining me.” Roberts contends with a recent diagnosis of multiple sclerosis, but also with the quotidian concerns of adults as they approach middle age, such as how they look, if anyone even notices them. When she gives a man in a wheelchair a buck, he responds, “I’ve seen five of you tonight. Honestly, five women here look just like you.”

Roberts grew up in Sun Prairie, Wisconsin, just outside of Madison, where she went to college. Working on her MFA at Northwestern brought her to Evanston, where she’s lived since 2000. In addition to making autobiographical comics, she teaches comics at the School of the Art Institute. We corresponded via email. 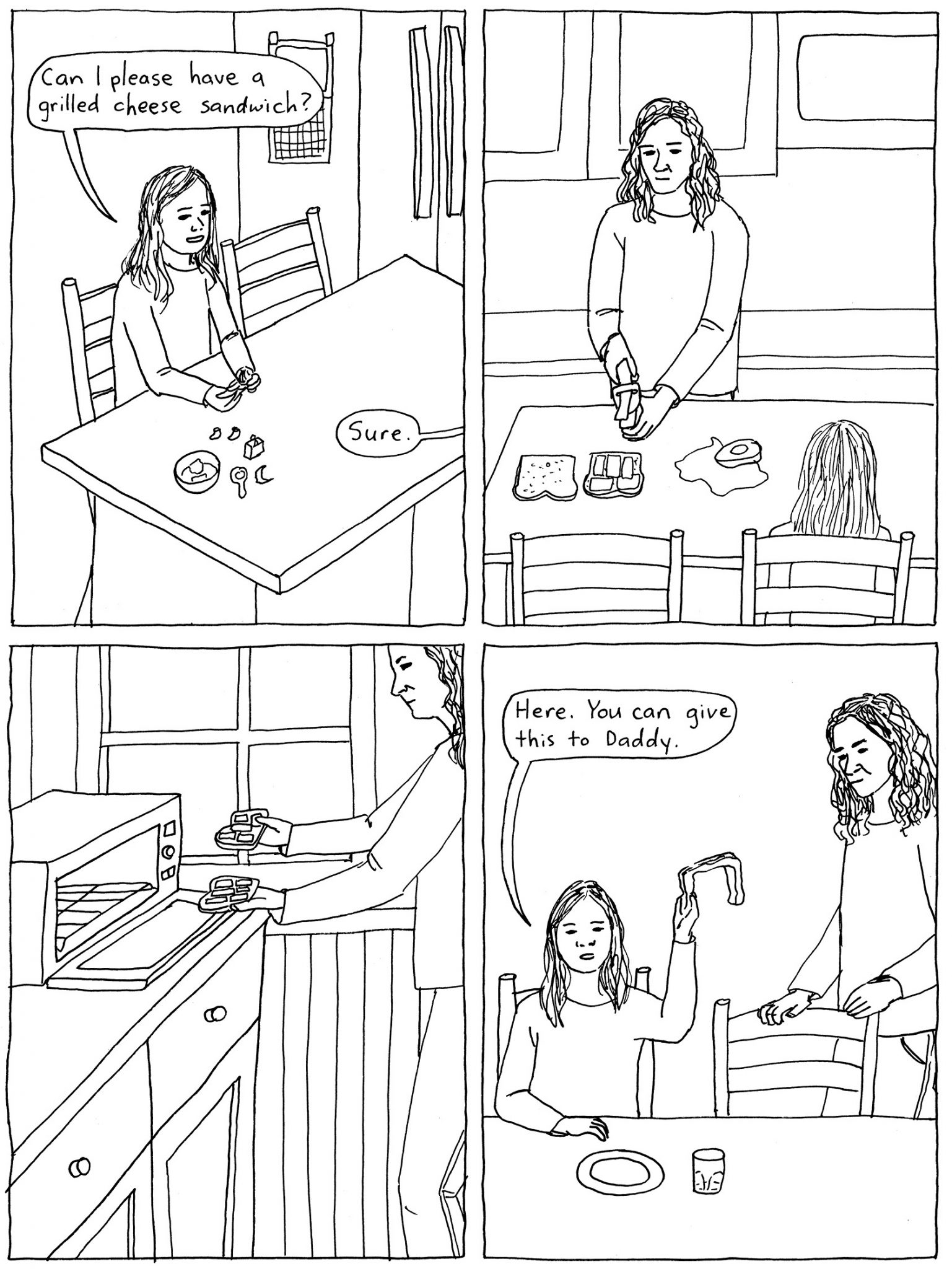 I wonder about your process and how it evolves with your parenting. “Process” is usually a dull question but when you have a small child, it’s amazing that you can accomplish anything. And how has it changed: before being a mom and then through the stages.

My process has changed a lot over the years. I used to teach full-time and make work on the weekends and over summer and winter break. When our daughter, Xia, was a baby, I took a year off of teaching and then went back part time. I worked on comics when she napped and we hired a sitter for a few hours on Saturdays. Eventually I gained studio time when she was in pre-school. When she stopped napping, she was watching a little TV, so I could work then. Around the time she finally started full time school, I was diagnosed with MS and started having a lot of fatigue. My energy levels are inconsistent. My moods are all over the map and change rapidly. I try to listen to my body and not argue with what it tells me. I spend a lot of time not really doing anything. I work on comics whenever I have time, energy, and a clear head, which is usually a few days a week for maybe one-to-three hours. I don’t like things that feel strenuous and I totally hate feeling rushed. I’ve never prioritized work over sleep. I don’t have a weekly page goal, and when I finish a book, I usually don’t make comics for a couple months. When I do sit down to draw, I’m in my house at the kitchen island, my dining room, or my studio. I talk on the phone or listen to music or am just quiet. I only need total concentration when I’m writing or penciling the layout. Sometimes Xia watches me draw and tells me all the things I’m doing wrong while giggling. I keep a journal and keep notes on my phone of short conversations or descriptions of comics I want to make. Then I do a very rough drawing that establishes the composition and exact words that will be on the page. I pencil the page on Bristol board, ink it, scan it, and do a little touching up in Photoshop. There isn’t a time when I’m sitting down to write a bunch of pages. It all just appears in bits.

Is there a story behind the name Xia?

In my high school German class, we had to pick a German name to use. I picked Xia, so in a way it was my name for four years. When we decided to give the name to our daughter, we found very little evidence of it being a German name. It seems to be Greek and Chinese (with different pronunciations). Ironically, “Keiler” is a German word that means “wild boar.” I’ve seen a few German people try to awkwardly stifle a laugh when I introduce myself. 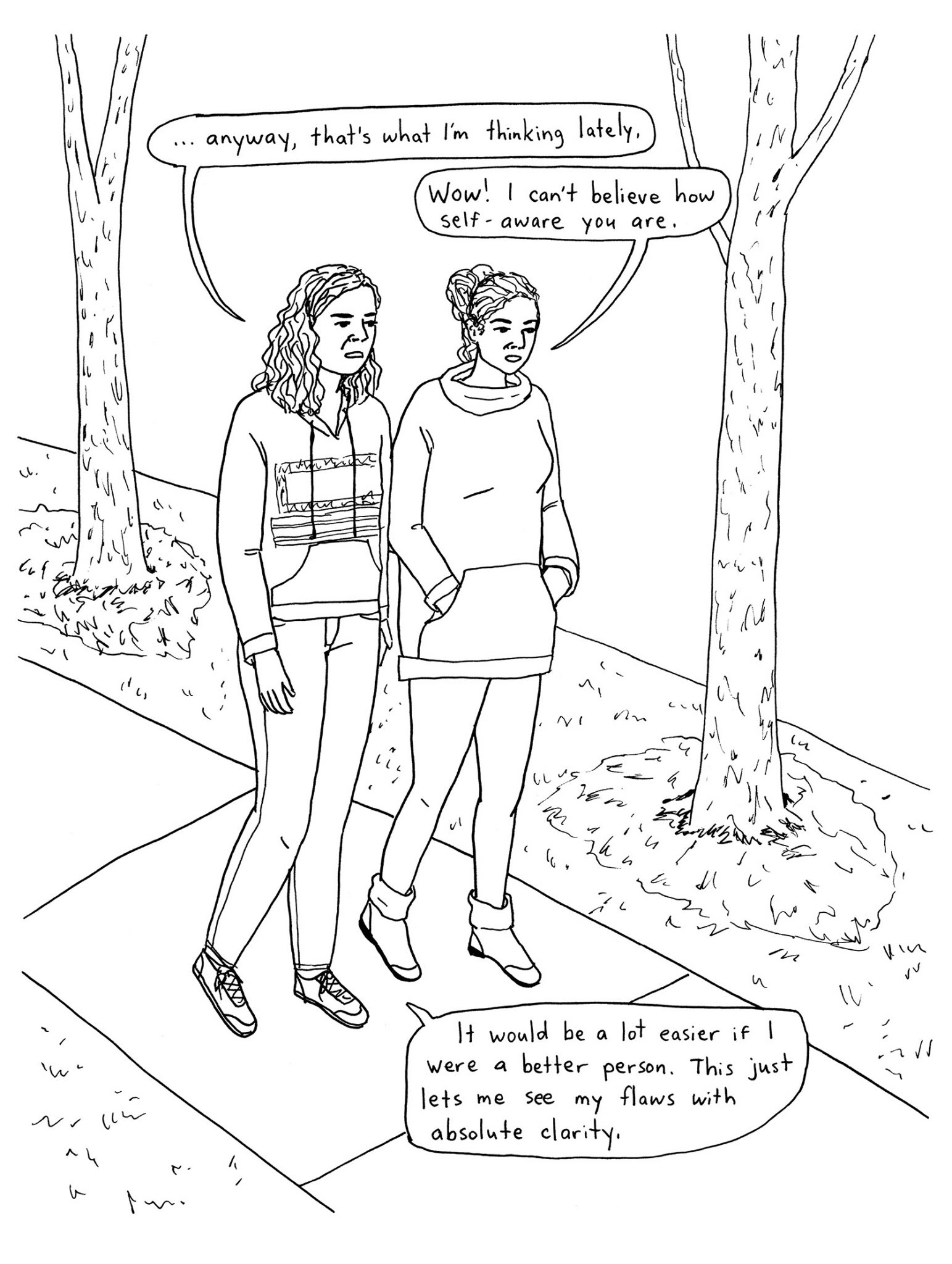 Talk about your drawing style and your decision to do this book in black-and-white.

My drawing style is awkward realism. It comes from the way I feel most of the time. It’s my worldview. I want my drawing style to describe the scene in a clear way. The details are relevant to understanding the moment and creating a mood or humor. Nothing is added for the sake of making the drawing more attractive or decorative. I lay things out in a way that will create the best flow for the dialogue. I like to depict full bodies in space in a perspective that isn’t quite linear, Western perspective or isometric. It’s like when you look at a dollhouse or diorama from slightly above and the scale doesn’t diminish noticeably. The parallel lines in life remain fairly parallel in the drawing, instead of converging toward a vanishing point the way they would in a photograph.

Foreshortening is avoided because even though it’s how life actually looks to the eye, it doesn’t feel that way. When I draw, there is a strong sense of how to make it right, and I just keep penciling and erasing until it’s there. It’s very clear to me when to stop, when I’m done. There isn’t a lot of experimentation. I don’t feel a rush of inspiration or motivation. It’s actually one of the most stable, predictable and calm areas of my otherwise emotionally chaotic life.

My work is usually black-and-white because color hides the line to some degree, and I want the line to be completely unobstructed. I like to make paintings from individual comics panels, but the narrative wouldn’t work the same way if the whole book were in color. I feel like I “read” black-and-white drawings, and “look at” color images. Color affects the sense of time, mood, and atmosphere. When I use color, certain things are gained, but other things are lost. It’s not because one is better than the other.

How does your work influence your life? In other words, does the knowledge that you’re living your stories make you a better or worse parent, spouse, daughter?

Making autobio comics can change a situation in the same way that taking photos or video can. I might not be present in the same way because I’m focused on creating documentation. I’m less likely to portray very private emotional moments because I want to experience those moments in a direct, unfiltered way. There is some aspect to privacy that can make things seem more special. Partly for that reason, I turn my attention to moments that don’t seem precious or important. There are big life events that naturally become stories for us—giving birth, meeting your partner, vacations, holidays. When I write about these things I often dodge the focal point and dwell on the insignificant details. If I’m grocery shopping or sitting in a waiting room, I would never feel like I’m ruining that moment by recording it or becoming too self-conscious, but if I’m videotaping a recital I feel like I miss the experience and am actually making the event less special. Even as I’m saying this, I’m thinking, “Is that really true?” because I have written about special, private moments and comics probably do make me a better or worse person. Probably anyone that knows me well would answer these questions differently. The way I go about things is a bit mysterious to me, and even though I’m always trying to figure everything out, I don’t think I need to. My gut is probably smarter than my brain.

I think the main force that drives what I will jot down and turn into comics are moments that I want to remember. I think that’s the only common denominator. Do I want to keep reliving this moment? 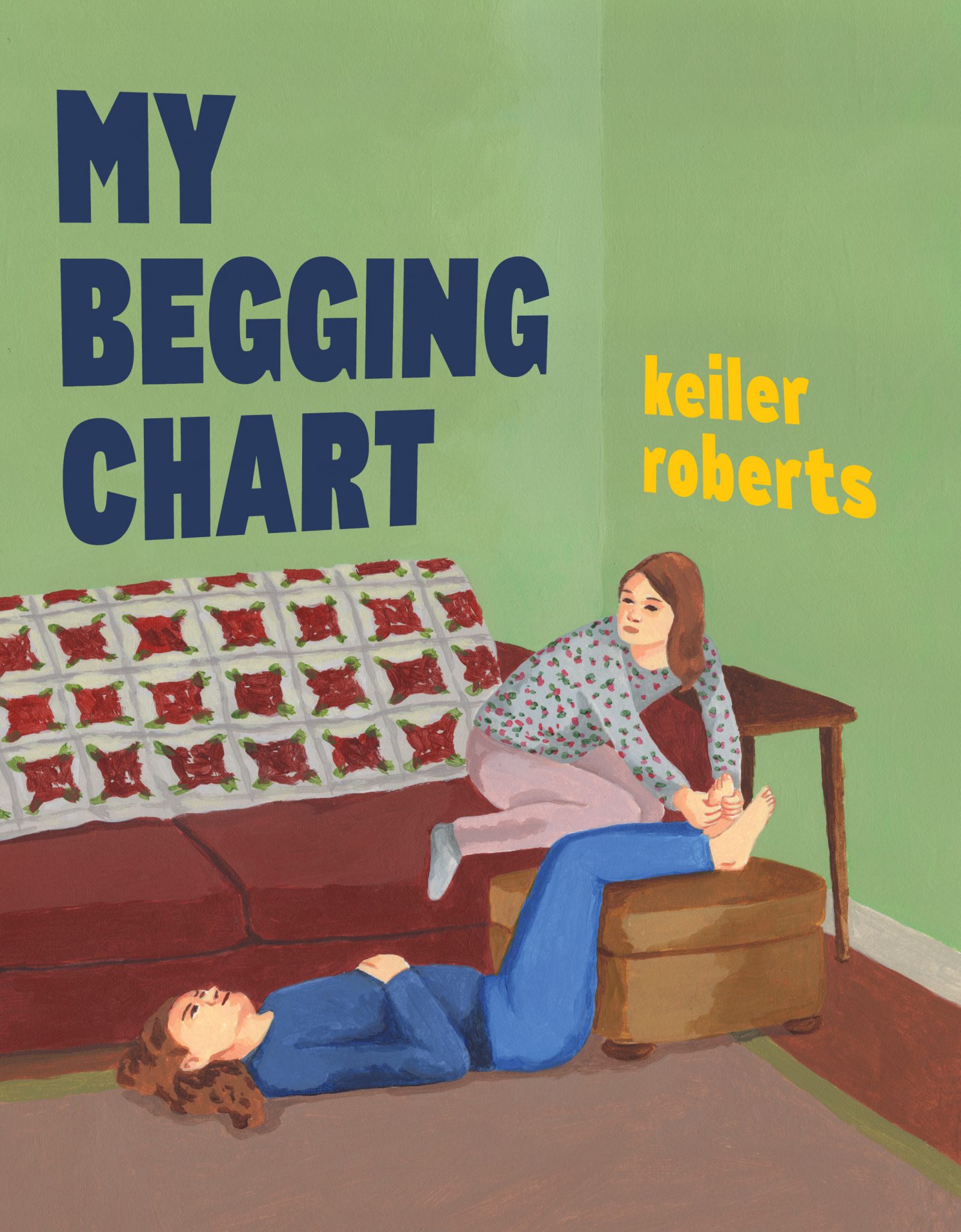