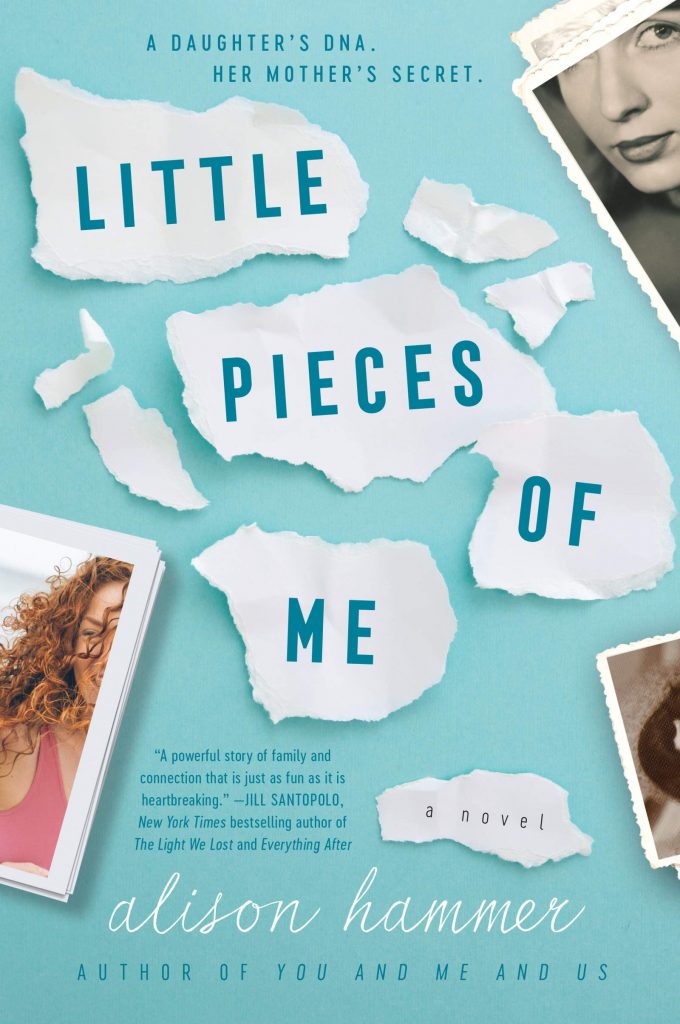 Debates about nurture versus nature have bounced around academic circles for more than a century-and-a-half, pressing some of our finest minds in sociology, psychiatry and other human studies disciplines to examine the hows and whys of what makes us who we are. Relatively recent advancements in the science of DNA, particularly the development of cost-effective testing, have given rise to a cottage industry in which companies like Ancestry, 23andMe and CRIGenetics empower ordinary people to discover their genetic makeup. Lots of people now find biological parents, children, siblings and other ancestors that in previous generations remained part of an unknown, often secret, past.

In Alison Hammer’s novel, “Little Pieces of Me,” heroine Paige Meyer learns, through a single click on her computer, that the man who raised her as his own daughter was not, in fact, her biological father; that distinction suddenly belongs to a stranger named Andrew Abrams. This accidental discovery—Paige only played the DNA testing game because a free kit came as a perk from an old advertising client—puts into motion a recalculation of her identity and a reexamination of the history that informed it. Paige is thrust into her own personal existential nurture versus nature crisis.

Dual storylines toggle between the “Now,” consumed by Paige’s hunt for her truth, and the “Then,” concerned with the circumstances and events that led to this lifelong deception.

Paige is a forty-three-year-old bride-to-be, living with her perfect fiancé, Jeff Parker, in a North State Street skyrise apartment within walking distance of the Viagra Triangle hot spots she frequents, almost always as part of a trio that includes best friends Maks and Margaux. Paige receives her unexpected news as a mystery but reacts to it as a dilemma: she is more obsessed about her murky past than she is determined to clarify it. Her friends and partner coax her through the waffling and agonizing; she finally agrees she needs answers. This proves to be difficult because A) Paige’s father died two years before the story begins (on a birthday, her forty-third, she shared with him); B) her mother, Elizabeth, with whom Paige has never enjoyed a particularly easy or loving relationship, refuses, as is her habit, to confront, much less speak honestly about, this difficult subject; and, C) the alleged biological father does not much engage with Paige’s email queries.

Meanwhile, back in Lawrence, Kansas, circa 1974, Paige’s future mother, who then went by the nickname Betsy, has a one-time fling with a homosexual fraternity-boy placekicker that ends, literally, the morning after. The single sexual encounter between Andy and Betsy, in the immediate aftermath of her breakup with serious suitor Mark Meyer, results in Andy’s confession that he prefers men, one in particular, and Betsy’s promise to keep his secret.

For Paige, a Jewish St. Louis transplant looking for a job and planning her future with Jeff, the revelation of her birth father seems potentially harmful. She instinctually blames her mother for the ordeal, though she and her friends do allow for other possibilities. She immediately begins to see all of the characteristics that set her apart from her birth father and to contextualize the emotional chasm between her and her much younger twin sisters. Paige, before knowing anything concrete, speculates about an Andrew Abrams possessed of mostly abhorrent human instincts. Paige, in essence, looks back at her first forty-three years and leans into the idea that the sham has been evident all along, obvious in her dimples and her father’s occupation (financial advisor), present even as early as fifth grade, when, during the course of a class ancestry project involving the perusal of family photo albums, she concluded, “I didn’t belong.”

The historical timeline, though, tells a more nuanced story, that of a terrified and vulnerable young man (with a “gentleman’s conscience”) and a confused and compromised young woman (with a heart that “had never really been young”) trying to grow into adults under difficult circumstances. While neither character displays their best selves, both possess conscience and sensitivity; they want what they want but they’re not indifferent to the consequences of their behavior. Andy, thereafter, refrains from his hurtful habit of using women to disguise his homosexuality, and invests in his art. Betsy, once she decides she cannot go through with an abortion, feels she must, somehow, provide a good, loving nest for her impending baby, and that somehow is to reconcile with Mark and deceive him into thinking he is the father.

The novel is fluid in the hollow sentiments that populate many romance novels. Eyes sparkle and lock. Faces light up. Hands tremble. “Hot, angry” tears fall. Hearts melt, they swell, and they break. Minds race. Stomachs turn inside out. Phrases like “she loved the way books could transport her to another time and place” move things along, but without much originality or genuine insight.

The character development is much stronger, at least where it concerns the trio of friends. The snappy interactions are often funny and the chemistry palpable. Paige, Maks and Margaux, along with Jeff and other minor players, inhabit a world-within-a-world in which they enjoy and support and love one another, in contrast to Paige’s family dynamics. They all live in the same Gold Coast neighborhood, see each other nearly every night, and pop over on the smallest of excuses, like providing a Gatorade to help soothe a hangover. The Chicago settings, like Dublin’s, Carmine’s, and Four Farthings, don’t add much to the story—they are named rather than recreated—but work just fine as places for the main characters to engage.

Every character, at their core, is a good person, and their misadventures, miscalculations and misdemeanors result from misunderstanding. We see this in the various ways that the characters respond to conflict. All this genuine niceness, and the atmosphere that enables it, shares a sensibility more in line with post-undergrad optimism than middle-aged pragmatism, but it does make for the kind of novel where good things ultimately come to all the good people.

The narrative dodges into and out of social and professional situations, but too often those seem bluffed rather than owned. For example, with the young Andy, “His legs had never been in better shape, and it was a shame he hadn’t had more opportunities to kick field goals for his team. But the offensive line had to start scoring touchdowns—or at least avoid turnovers for that to happen.” Anyone with passing familiarity with football knows that offensive lines block rather than score—a small error, perhaps, but one, as in other places, like the Chicago art gallery in which a hostess makes a point to say what is true of virtually all art galleries, that the art is for sale, or Paige’s suspicion that Ross can undermine Jeff’s entire professional career by tricking him into taking a day off, that brings into question the narrator’s authority.

Eventually, the historical timeline begins to catch up with the current story. It is at the intersection of past and present that we see where things truly stand and begin to sketch a roadmap for how they might proceed. Paige, an ad designer, inches her way toward better understanding her biological father’s true nature and what he might mean to her. She starts to appreciate that her mother’s motivation derives not from genuine coldness but shame, Paige a reminder of the big lie that dates all the way back to conception. Paige also works her way to an emotionally mature perspective on the impact this truth has on memories, particularly of her adoptive father, as well as family history. In the end, we get a glimpse of Paige’s tent getting bigger and everybody involved benefitting from the revelation that at first seemed disastrous. The Jeff-Paige wedding, both the novel’s climax and denouement, represents a new chapter, but more so a renewal—for her and her biological relatives, her relationship to her mother and siblings (or one, in any event; she doesn’t seem to much care for the other twin sister), and even an acceptance of her mother’s new beau.

“Little Pieces of Me” is a flawed but entertaining novel. All the makings are there for a story that dives deeper into an old but now-timely debate about the relative importance of genetics in human makeup. We do get some of that. Mostly, though, we get lively characters going on an adventure that might go this way or that, but with almost absolute assurance that everything will turn out okay.