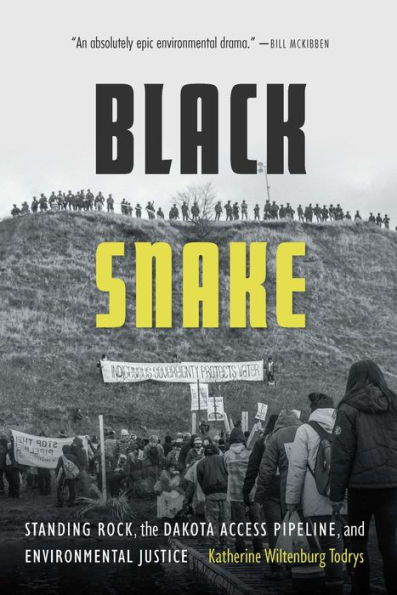 You’ll recall several autumns ago, in 2016, when nearly everyone on your Facebook feed checked in at Standing Rock, North Dakota, to support the water protectors protesting the construction of the Dakota Access Pipeline (DAPL). On what was originally Dakota, Lakota and Sioux lands, the DAPL construction was approved without an environmental impact study, with little regard to sacred burial grounds. In response, water protectors—led largely by Native youth and elders—set up camps adjacent to the construction site to protest peacefully while building community. In her new book, “Black Snake,” Katherine Wiltenburg Todrys outlines the formation of the camps as well as the key events before and after law enforcement intervened violently. With firsthand interviews, Todrys provides a comprehensive overview of the pipeline’s impact while introducing us to four important activists, all of them Native women, who strove to achieve environmental justice.

What’s immediately apparent is that this is no simple narrative. Like any story about power, there are multiple and contradictory dynamics at play. DAPL is just one of several pipelines in the Bakken oil fields—with some of them owned and operated by reservation leaders themselves. While this may seem antithetical to Native values, some leaders could not refuse the billions in oil revenue for long-overdue improvements to their reservations. DAPL is different in that it came on the heels of internal corruption, such as the Three Affiliated Tribes chairman Tex Hall collecting oil profits for himself, as well as a series of oil spills from existing pipelines which caused significant damage to public health, agriculture and wildlife. DAPL would be the first pipeline to stretch from the northwest corner of North Dakota to Patoka, Illinois, endangering the Missouri River’s water supply. Hence, the water protectors.

Todrys’ book examines the environmental consequences, but also the social and political impact of pipelines. “Man camps,” which sprouted up for the largely male population working on the oil fields, caused an alarming increase in domestic violence, sexual abuse and kidnapping with no justice for the victims or their families. Furthermore, there was a limited response from the government if not outright hostility toward the water protectors and the Native populations living on the reservations. Neither Jack Dalrymple, the then-governor of North Dakota, or even President Obama denounced the pipeline’s construction, even after bulldozers destroyed burial grounds, because they were also navigating a tricky relationship with the oil companies. Todrys conveys the complicated entanglement of pipeline stakeholders where profit ultimately takes precedence.

Any story of power is also a story about resistance. Despite multiple setbacks and risks, the water protectors successfully brought environmental, social and political justice to the forefront of our attention in 2016. Most importantly, they were not alone. Neighboring tribes and archaeologists, religious leaders, celebrities and everyday citizens lent their support by writing to Congress, decrying the desecration of sacred land or traveling to Standing Rock to link arms with the water protectors. As the DAPL construction continued within their line of sight, the water protectors and their supporters continued to pray, dance, cook and learn from each other. Based on the stories and insights from LaDonna Allard, Jasilyn Charger, Lisa DeVille and Kandi White, Todrys paints a vivid portrait of daily life on the reservations and the protests against the broader backdrop of our nation’s history exploiting Native peoples.

My one critique is the missed opportunity to innovate within the nonfiction form. Because Todrys conducted multiple long-form interviews with the four activists, I was hoping we would see more of their own words shine through the book, perhaps with the interview transcripts right alongside her analysis. Still, her book gives a voice to those who have long been silenced or misunderstood as they fight not just for their lands but for the health of everyone who lives in this nation.