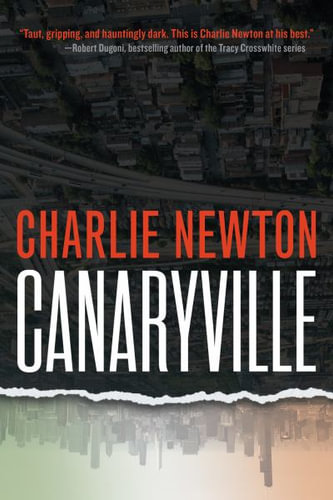 Denny Banahan’s South Side Tough comes honestly. He scrabbled through his impoverished youth in a disheveled neighborhood, surviving on its wits as well as baseball bats and knives. He dreamed, along with his brother Mike, of cashing in enough returnable pop bottles to sponsor a family journey into the idyllic wonderlands beyond Canaryville, dreams stolen and burned before he ever broke through the invisible borders of his sequestered existence. In Canaryville, lines between criminal and hero blur beyond distinction, and it is at this juncture that Charlie Newton carves out his tribal thriller.

Banahan, this close to retiring to his final-chapter dream of starting a suburban thoroughbred rescue farm with his wickedly enchanting girlfriend, finds himself in a crisis that promises to destroy Chicago and further entrench hostility between factions that remain, all these decades later, the foundation of the city’s violent DNA. He is a police detective now, Lieutenant Banahan, though federal authorities would like to strip him of that title along with his pension.

As a youth, Banahan beat a man nearly to death, the man who stole his life savings and burned his family home, then accepted his exile into juvenile reform prison. Years later, he used his freedom and connections to switch sides, from criminal to cop, although at his core Banahan’s sense of loyalty and justice remained the same. When Mike, also a cop, was murdered, Banahan, ever the vigilante, reverted to a brand of street justice cheered or at least understood among his peers, but not condoned on his job or by any relevant legal statues. Those as yet unpunished murders, along with his lead role in diffusing the tempest storm brewing in Chicago, threaten Banahan’s sunset ride.

“Canaryville” is told alternately through the points of view of a crafty, professional terrorist and Banahan, whose own story wriggles between past and present. The crisis at hand, then, is seen from distinct perspectives. A wretched double murder and a pub bombing at opposite ends of Canaryville’s east-west borders, along with the murder of a former priest, possess all the telltale signs of animosity that echo Chicago’s deadly racist murder and arson sprees of 1919. It looks like a reincarnation of Red Summer, as crime-scene graffiti spells out.

But Banahan, white like the majority of the neighborhood, and Detective Jimmy “The Gent” Daniels, Black like the forces squaring off on the other side of this impending war, don’t want this to be racially motivated, and nagging inconsistencies indicate it might not be. The Canaryville denizens, almost universally, are racist, openly and proudly so, but not Banahan. Or at least Banahan’s judgment is based more on quality of character—and here he finds plenty of fault to go around—than color. He is in an uncomfortable position of being a suspect part of his own tribe—the Canaryville Irish—as well as other tribes with which on the surface he belongs. The police fraternity—many of the higher ups, anyway—deem him a bad man, guilty of bad deeds. The criminals with whom he grew up naturally treat him with the mistrust of an enemy. His old neighbors scorn Banahan for jilting the local beauty in favor of a Black woman, as well as his allegiance to a Black cop. Even Banahan’s Irish girlfriend sympathizes with the country’s north factions, which are in a decades-old dispute with his own southern ancestors.

All of these tribes prepare for what appears to be an epic clash replete with the kind of extreme violence not seen in a century and from which the damage will be lasting. Odds are that Banahan and Daniels, along with their closest loved ones, will be collateral damage. Banahan has thirty-six hours to defuse the situation, and in the process save his city, his neighborhood, his pension and his partner, a final act that will be rewarded with a gentle life filled with love, laughter, and the electric sound of hooves bearing down on the finish tape.

The sociopath killer-for-hire, Steven, a talented amateur painter, treats mass murder like an art installation. His detached sophistication allows us to peep into a callous world in which human life is easily dispensable, and destruction, done artfully, holds a unique kind of beauty. Steven does the bidding of a white Irish Nationalist extremist, the goal being not only to eliminate specific targets but to incite a race war. Steven is meant to assassinate select targets to avenge seriously old political grievances and at the same time overlay the violent scenes with red herrings leading all those seeking justice—street as well as criminal—to conclude an entirely different motivation. He is good at what he does, proud of it to the point of arrogance. It is he whom must be stopped. Banahan and Daniels are tasked with sifting through all the false leads to identify their prime suspect and then outwork and outwit a fearless man immune to standard police work, all the while holding at bay the amped and armed citizens inside and outside the Canaryville barriers.

“Canaryville” performs like any other thriller—blood and booms, a ticking clock, romantic intrigue, frequent twists and unexpected turns—but rises above its kind through exceptionally crisp prose, nuanced character building, smart dialogue, and attention to the intellectual and emotional underpinnings that give meaning to the fast-paced surface story. Newton’s willingness to accept racism on its face rather than massage out some of the ugliness in otherwise sympathetic characters breathes fire into every aspect of this story and allows Chicago, or at least a part of it, to become an organism onto itself. It is more than just a decision to mirror the decidedly insensitive language of the streets; it is a commitment to understanding, if not condoning, the fierce hatred that exists between various groups of people. Newton, through his anti-hero, sees and acknowledges the base instincts to survive, stride and protect one’s own. Every faction has their own sense of justice, warped though it may be, and feels responsible for upholding it.

The alternate points of view also work to perfection in this novel. Unlike the common thriller, in which the heroes receive an implied protection, we know, through Steven’s point of view, that nobody, including characters integral to a happy ending, is safe. We also get a much more complicated understanding of Banahan’s psyche—who he is and how he arrived here—and a sense that he, too, is capable of most anything, including a range of behavior likely to wreck his own happy ending.

Chicago is not mere atmosphere in this novel—Newton sees to it that the setting is particular in its details, quirks, hidden history and attitudes. This is evident in every crack and crevice of the story. He depicts Chicago as a series of cities within The City, in which sympathies lie with the familiar and bigotry is directed toward the outside. It’s a Chicago in which right and wrong refuse simple categorizations, and good guys and bad guys operate on a sliding scale. Ultimately, it is a Chicago in which the diverse parts need some semblance of unity, even if only to continue marginalizing the other. It’s a Chicago with great emotion but little sentimentality, filled with people mixed up in each other’s lives and business, for better and for worse.

Banahan, of course, leads this lightning charge through and for the city. He says things like, “The victim’s name is Dillon ‘Dill’ Reem. I never liked Dill and I’m glad he’s dead.” It is a cocksureness parts savvy, part skepticism, and part deflective humor that win Denny both scorn and admiration. Notably, though, Denny, over the course of time, finds that his confidence is often misplaced, his judgements variably flawed, and his acts of street justice sometimes entirely wrong. In “Canaryville,” vigilantism, rather than achieving expedient justice, gets a bad name in every imaginable way.

Secondary characters like Banahan’s girlfriend bar owner Maureen Cavanaugh Cane and her gangster brother Pádraig, as well as Denny’s childhood friends Cullen Mahoney (now his police boss) and Loef Brummel (now an Irish mob boss), invigorate the story with intrigue that serves the intertwined story lines and deepen the portrait of a community so familiar with its people that digressions can only be seen from a larger perspective.

Set against a backdrop of dueling St. Patrick’s Day parades—one sanctioned downtown and the other banned on the South Side—”Canaryville” is a story that manages at once to be sensational and realistic, page turner and thought provoker, satisfying and sad. You won’t find the obvious Good Triumphs Over Evil tropes here. Rather, you’ll find how people long divested of such nonsense confront challenges to their long-held ways and the difficulties inherent in progress.