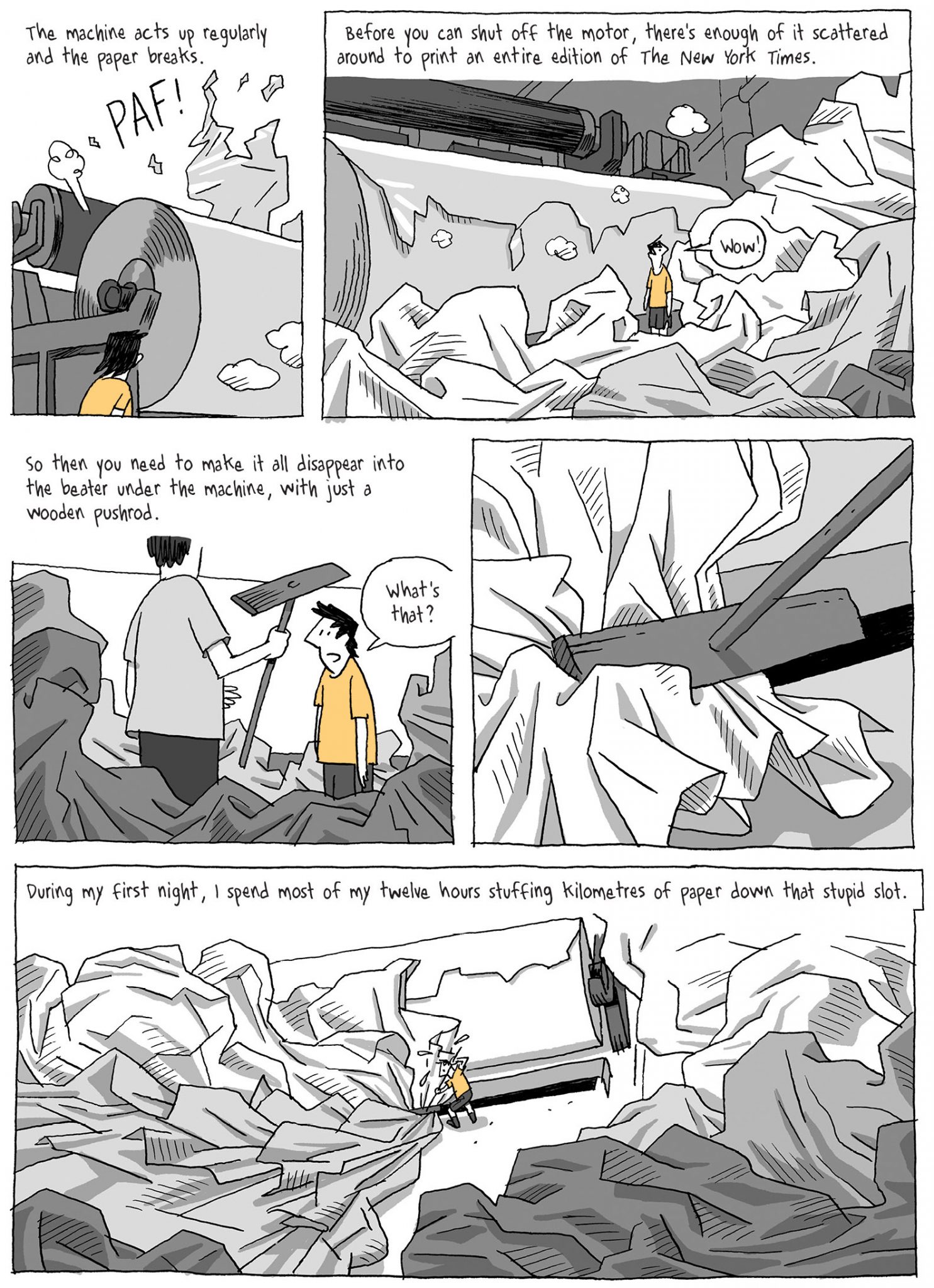 Those teenage summer jobs seem inconsequential in the context of a lifetime, especially when they involve work in restaurants, in retail or in a factory that has little to do with our career intentions. But they stay with us, the memories seared in as formative experiences. This is the territory that cartoonist Guy Delisle mines in “Factory Summers.” Delisle spent three summers in his late teens working the overnight shift at a paper mill in his native Québec City. His father worked there, too, but in a white-collar job where he almost never encountered his son.

Delisle remembers the particulars of the work he did, even decades removed, but really shines in depicting the emotional beats of a first job as a teenager, the exaggerated nervousness about making mistakes, the intrigues of having peer relationships with coworkers who, unlike your schoolmates, are not your age nor on a career path of any sort. Delisle is cognizant of the class distinctions his co-workers feel, toward him and especially toward the factory’s college-educated managers who, when they do enter the factory floor on rare occasions, are the only workers wearing hard hats. Delisle’s peers wear just earplugs due to the dangerously high-decibel levels of noise made by the machinery they attend to. “Look at that stupid hardhat!” one worker says in the breakroom as he gazes out toward the factory floor. “What’s he scared of? A giant papercut on his head?” His audience of co-workers laughs at this, but we don’t know if they find it funny or it’s just laughter borne of solidarity or even despair, as Delisle pulls away from their room and shifts perspective so we see only the word balloons rising above.

Delisle also remembers the mess of free-spiritedness, social awkwardness and parental discontent at that age. In one memorable sequence, he races his bicycle through the streets on the way to work, not because he’s late, but just because. His handful of encounters with his father are insightful and moving; early on, his cartoonist eye moves away from his dad’s talking mouth and zeroes in on his footwear—sandals with socks, the universal symbol of filial embarrassment. Later, he visits his father’s office and hears his dad share his work proudly with him. He cannot understand what he’s hearing, but “knowing perfectly well that I’ll never be in my father’s office again, I try to take in as much as possible.”

Delisle’s drawing style might be described as a classical approach to contemporary cartooning, but he occasionally flourishes us with gorgeous renditions of the factory and its architecture. Most intriguing, though, is his experiment in color, which he’s done in other books. Here, it’s all black-and-white-and-gray, save for one splash of golden orange in nearly every panel. I sometimes found myself studying the color decisions, trying to decode a pattern.

This book moved me. I’m about the same age as the author, and share some of the same beats in my life as he’s depicted here so effectively. In one brief interlude, he moves into his older brother’s room and listens to his records, laying on the floor, killing time. “This was back when we’d listen to entire records while analyzing every detail on the album cover,” he writes. And I nod along.