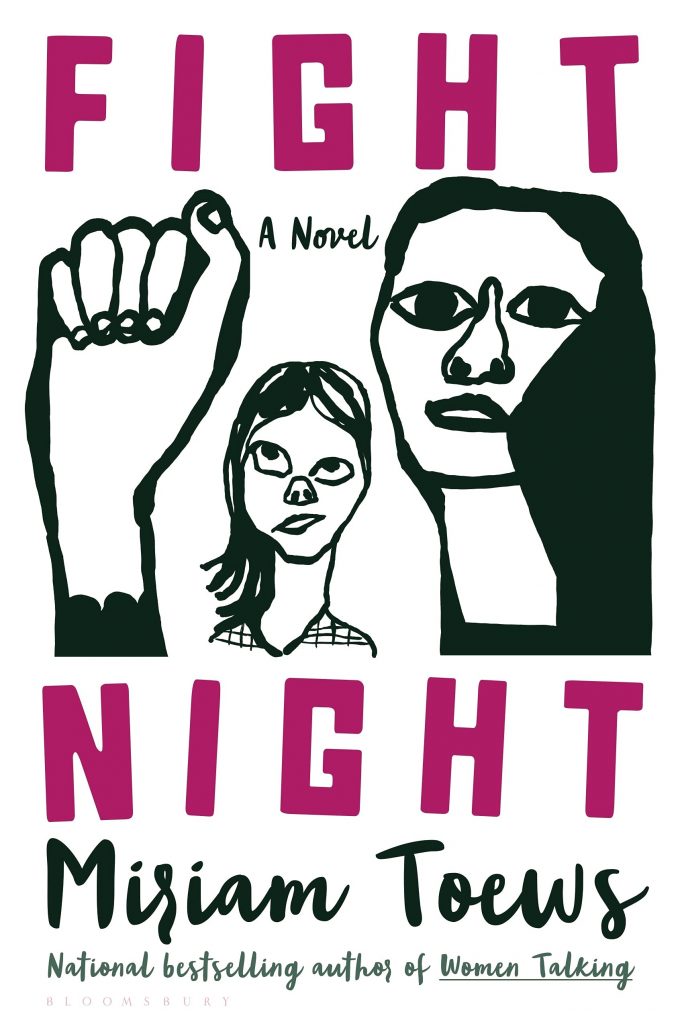 The first half of Miriam Toews’ “Fight Night” is mainly the uproariously hilarious thoughts of a precocious nine-year old living with her pregnant mother and her grandmother. Anyone who’s read “Women Talking” knows that Toews can bring humor to even a deeply upsetting narrative, but in her latest novel, she’s loosened the reins. Expect chortles.

While each character is richly developed, it’s Grandma who’s full of surprises. According to her feisty granddaughter, Swiv, she “has one foot in the grave,” but she once led a raucous life, with stories that begin like, “One Christmas centuries ago Grandma was young and squatting on the sixth floor of an auto parts warehouse in West Berlin…”

There are heady but cheerful tales of her growing up one of fifteen children and eventually being locked out of her family fortune by the brothers and nephews and, memorably, not even being sold a screen door at cost from the family business.

Swiv’s mother, an actress, also has a history of traveling to far-off places. She furiously rants at a card shop manager when asked to sign her card elsewhere that you can’t “expect people to buy a goddamn card and envelope, go home, read ‘The Artist’s Way,’ get inspired, be creative with a cute message, go back out, find a goddamn mailbox that hasn’t been knocked over by meth-heads, drop the thing in the slot, slip three times on the ice, break your tailbone and go home again.”

What, you may wonder, caused these two women to seek escape and scream at card store managers? Swiv’s mother and grandmother grew up in Canada in a controlling, evangelical community. We never learn the whole story, but the impact of growing up in that patriarchal society under a cruel leader has left its mark on both women. It becomes clear that each has done her darndest to protect her own daughter from that previous life.

In the second half of “Fight Night,” Swiv and her grandmother fly to Fresno to visit relatives. “At some point in Grandma’s life someone must have threatened to kill her whole family unless she became friends with every single person she met,” says Swiv, lamenting how difficult it was to even deplane without sharing contact information with nearly everyone on board because they had already established a close relationship with her Grandma.

Grandma embraces the positive things about her past and her present, finding the joy in nearly everything. Swiv recounts their travel adventures in her exasperated pitter patter, like how her grandmother and her manicurist sing “Chiquitita” to her. “They both looked at me while they sang like they were trying to tell me something urgent. They sang the final verse which was ‘Chiquitita you and I cry. But the sun is still in the sky and shining above you!’ They were shouting at me!”

Toews’ book often reads like a fast-paced romp that seems to be leading less and less toward a traditional plot. What materializes eventually, is, in fact, a deeply heartwarming glimpse of the bonds between mothers and daughters and grandmothers and granddaughters. Rather than the rising action, climax and denouement of the hero’s journey, you’ll find the cyclical story of birth and death and birth again, coinciding and colliding in life’s messy way. (Kelly Roark)