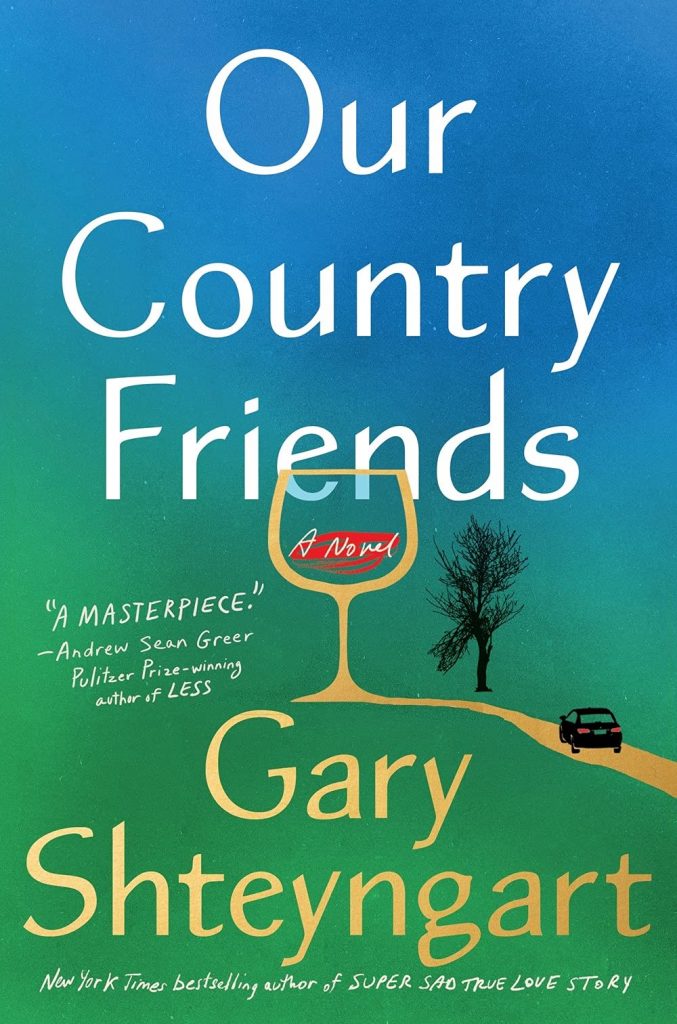 Gary Shteyngart’s latest novel, “Our Country Friends,” is perhaps one of the first “pandemic novels” to emerge. It’s greatly preferable to any “pandemic TV” that first assaulted us (except for “Superstore”) and certainly most “pandemic movies.” There’s nothing worse after sitting in Zoom meetings all day than watching people have Zoom meetings on TV at night. Shteyngart reimagines the uncertainty of those early days, and also adds context and clarity, even as we remain in the midst of pandemic life. A Russian novelist by the name of Sasha Senderovsky has invited his friends to join him and his wife and child in the country to wait out the pandemic in relative safety. The grounds hold small bungalows where the friends can work and sleep, and they meet in the evening on the large porch of the main house, separated and sanitized, at least in the beginning. The guests are two of Senderovsky’s friends from high school, Karen Cho, the creator of a popular app called Tröö Emotions, and Vinod Mehta, a struggling writer. Ed Kim, also an old friend, is someone Senderovsky is desperate to impress, and Dee is a young protégé who has recently published a successful book of essays. Finally, there’s a famous actor who’s meant to star in an adaptation of Senderovsky’s last book. He is mainly referred to as “the Actor,” leaving the reader the pleasure of casting the leading man of their choice. Shteyngart portrays the characters’ insecurities with his hallmark wit, sending them to ridiculous lengths to appear more wealthy or admired than they actually are. After Vinod admits to having seen the actor in an “avant-garde version of ‘The Cherry Orchard,’” he replies, “When I was much younger. I played the actual orchard, if I remember correctly. Or the personification of it.” and later, “I’m just a vessel. Chekhov was the genius?”

The character of Senderovsky is unabashedly similar to Gary Shteyngart himself, who was featured in the real estate section of the New York Times a few years ago in his own country villa (although with only one guest cottage). In that article, he boasts that he can write much more quickly than in New York, perhaps one of the reasons his pandemic novel is one of the first to emerge. However, “Our Country Friends” feels anything but rushed. It has the leisurely quality of a, yes, Russian novel with a wide cast of characters both rich and poor, youthful and desired, aging and desiring. Shteyngart captures the odd way time moved during the early days of the pandemic, how, despite our isolation, we were bound by fear and confusion. Everyone was obsessed with the same shows on Netflix, everyone looked askance at what other people considered safe practices. While this book couldn’t be any more relevant today, it seems very likely that it might come to represent this moment in history—although very much through the perspective of privileged people who can afford to move away from their homes and jobs for months.

Senderovsky and his friends may be moderately safe in “the familiar environment of the covered porch, the bourgeoisie pleasure dome of their elaborate meals,” but they live in uneasy distance with some of the locals who frighten them with displays of dominance, whether by aggressive driving or white power slogans. Although the neighbors with their pickup trucks and blue flags and the liberals at Senderovsky’s retreat are indicative of the greater reckoning America continues to have, this cast of characters forges on even as the proverbial cherry orchard is chopped down around them. As in any good Chekovian story, a metaphorical gun has been introduced in the first act, and it must go off in the second. What might have begun as silly and satirical veers toward heartfelt and meaningful as the COVID-19 virus makes its way into their secluded and pampered lives. (Kelly Roark)