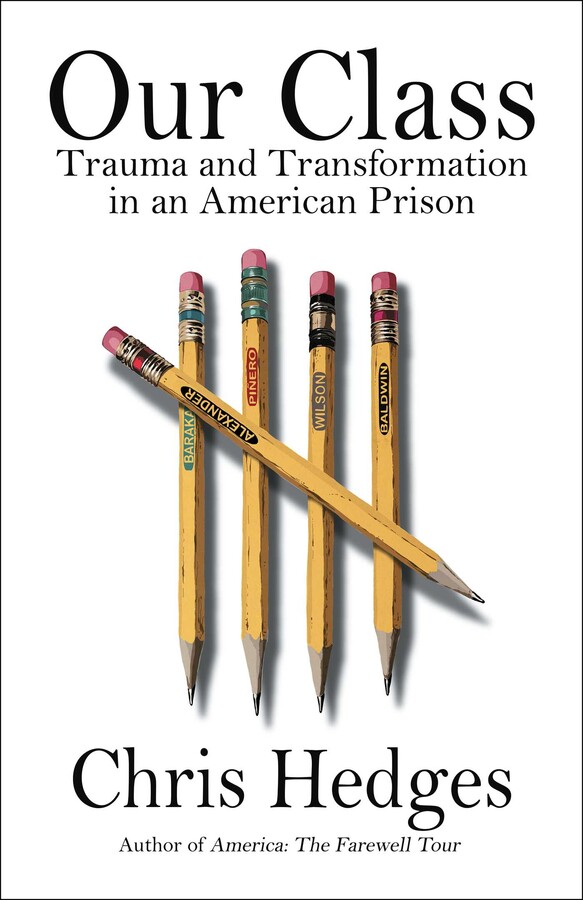 “Our Class” is a book I’d like to like, but it resolutely fends off any attempt at closeness. Written by Pulitzer Prize-winning war correspondent, essayist and political gadfly Chris Hedges, it emphasizes another of his many hats: ordained Presbyterian minister. His onetime New York Times colleague Stephen Kinzer once told Hedges, “You are not really a journalist–you are a minister pretending to be a journalist.” This work confirms that judgment. Ostensibly a memoir about the English class taught by Hedges at East Jersey State Prison in Rahway, New Jersey in 2013, “Our Class” is actually more of a sermon or lecture that turns the complexities and ambiguities of existence into grist for Hedges’ moralistic mill.

Which is a shame, as the story here is a potentially interesting and inspiring one. The prisoners Hedges meets are quite a group, described by one class member as “some of the 140 men who comprised what we call Rahway University; those of us who dedicated all our free time to studying to earn our college degree. We would be in the yard working the [weight] pile talking about Plato or Augustine… We were a dedicated fraternity of prison scholars.”

These “prison scholars” are mostly African American, many of the Muslim faith, with roots in the mean streets of Newark, Elizabeth, Trenton, Camden. Born into a class subject to want, oppression and educational neglect, they are nevertheless, as Hedges notes, “highly literate men… I was not the only writer in the room.”

Hedges introduces his students to a range of writings on race and incarceration, teaching such texts as Michelle Alexander’s “The New Jim Crow,” August Wilson’s “Fences” and “Joe Turner’s Come and Gone,” Miguel Piñero’s “Short Eyes” and the essays of James Baldwin. They in turn share—hesitantly at first, then more willingly, as the armor of prison existence softens—their stories of life inside and outside, and their insights into prison mores and culture. It’s an ethic of toughness and stoicism in a milieu expressly designed to crush dignity, thwart solidarity and complete the dehumanization process that is white supremacy.

Midway through the semester, the class veers away from the syllabus. Rather than just absorbing the words of others, the students decide to speak their own truth in the form of a group-composed play, titled “Caged.” The quest to write and stage the play in the Rahway penitentiary is itself a dramatic tale, as the inmates gradually open up about the daily degradations of prison life, as well as the moments of courage and wisdom. Play excerpts dot the second half of the book, along with Hedges’ commentary, quotes from the convict/playwrights, literary citations and miscellaneous prison narratives, some more compelling than others.

Under the direction of Chicago-based theater artist Jerrell Henderson, “Caged” was mounted in Trenton, New Jersey in 2018. The script was published two years later by Chicago’s Haymarket Books.

Would that this book were as engaging and revelatory as the play appears to be. Unfortunately, “Our Class” is a stiff and fragmented work, seemingly more stitched together than conceived as a cohesive whole. In part, this is due to the limitations of the book’s composition. Stringent prison rules prevented Hedges from personally contacting any students outside of class, so communication with those still behind bars was handled by others.

The larger issue, however, is Hedges’ own emotional reticence, which by the end dwarfs that of his pupils. A memoir—any memoir—takes on life when it shows how the author was moved and shaken and changed by the events and relationships captured in the book. We want to witness the self in its deeper interactions with the world. But that self barely emerges here. We clearly see Hedges’ clerical collar as he delivers the ponderous six-page sermon that closes the book, brimming over with quotes by everyone from Carl Jung to Flannery O’Connor to Abraham Joshua Heschel. His heart and soul are less visible, covered too well by the mask of earnest liberal do-gooderism.

There are things of value here, anecdotes and details that offer some measure of texture and nuance in a book overstuffed with high-flown abstraction. What will linger with me, I suspect, are the touches of strategic pettiness and sadism by prison administrators that serve to strip convicts of hope and load them down with debt, thus ensuring that cells remain full and the beast stays fed. Thus we learn that New Jersey prisoners—who typically earn a dollar per eight-hour workday—are charged $50 for the cheap clothes they wear upon release. They pay much more—up to $2,500—for the privilege of attending the funeral of a loved one, where they are allowed fifteen minutes with the body and forbidden from seeing family altogether.

“The state amputates itself whenever it turns a citizen into a criminal,” said Karl Marx, and we get a glimpse of the incredible violence of that process in “Our Class.” What’s missing, however, is a sense of what a close encounter with this hellish penal universe feels like firsthand, and how it resonates afterward. Also absent is any awareness of just how strange and galling is the book’s basic setup, in which an upper-middle-class white man, with his Brooks Brothers suit and Harvard Divinity School degree, explains to a room full of Black inmates the nature of poverty and the meaning of their suffering.

The final sermon concludes on a self-congratulatory note, as Hedges applauds the play he has midwifed, which “[affirms] the integrity of those the world has forgotten and demonized,” and notes that his friendship with his students “is one of the most precious things I possess… that is why today I am the most blessed among you.” Well, of course he is. He is blessed with his freedom, his social status, his family, his comfortable present and secure future. The happy ending presented here is his alone, as he counts his blessings while the prison doors slam shut behind him.

“Our Class: Trauma and Transformation in an American Prison”
By Chris Hedges
Simon & Schuster, 272 pages