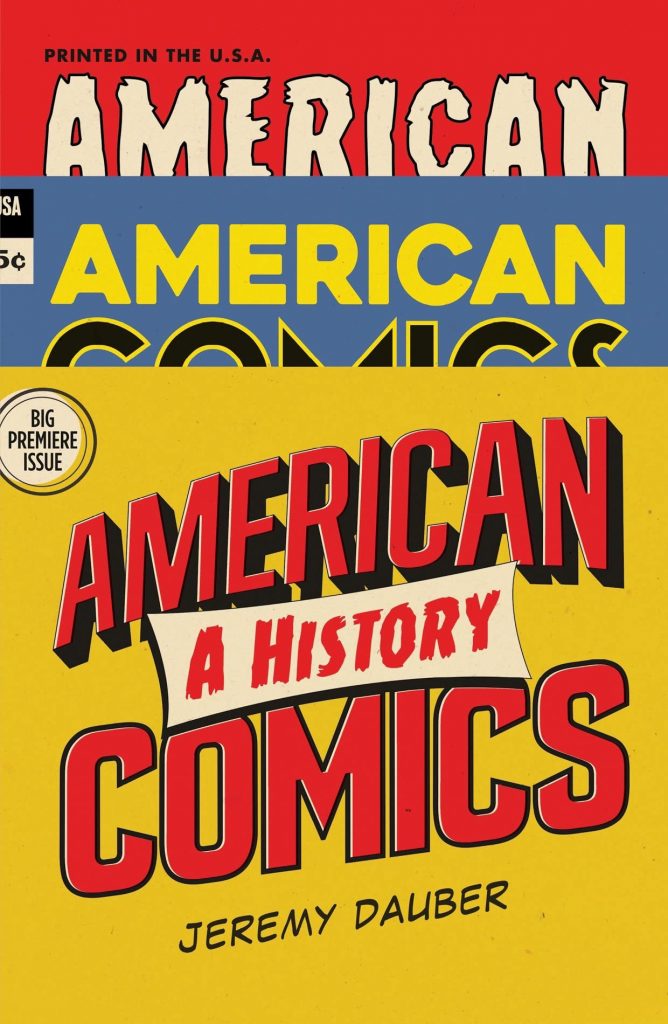 More wall than brick, Jewish literature and American studies professor at Columbia University Jeremy Dauber’s “American Comics: A History” is the compendium that could stop any door. While not an encyclopedia proper, it is an encyclopedic cannonball through hundreds of artists and moments.

There’s much to trust about its dense succession of stories about American, drawn stories: of the 592 pages, eighty-six are extended footnotes and thirty-one are index. (The history of American comics is still a jam-packed but slightly more digestible 445 pages.) Dauber provides vigorous synopsis of era after era, with a propulsive knack for transitions: sentences and paragraphs waste no time moving forward. From the rumbustious Thomas Nast in the mid-nineteenth century to the industry’s latter-day hopes to broaden audiences and the well of creators in the modern day.

A few passages from Dauber give the occasion of the book’s prose style and offhand erudition. On George Herriman: “‘Krazy Kat’ can be described much as ‘Ulysses,’ serialized just five years later, could be summarized as ‘a long walk around Dublin’: accurate, but wholly insufficient.” Dauber, typically, notes in parenthesis, “Joyce, himself, however, was apparently a ‘Mutt and Jeff’ fan.”

Hundreds more pages twist and turn through the history. From the late-century turn away from the artistic bedrock of the American comic strip industry, Dauber writes, Daniel Clowes’ “series ‘Eightball,’ begun in October 1989, featured weirdos: not Crumbian pervert weirdoes, but bizarre, alienated individuals seeking same. In the ‘Eightball’ universe, everyone is sweaty, pimply, often overweight; they look like flounder under morgue lights.”

“In 1997, Art Spiegelman suggested that ‘autobiography has become the primary mode of underground comics—like the superheroes are for the other branch of the comic family trees.’ Ten years later, Alison Bechdel said she always felt ‘there was something inherently autobiographical about cartooning….'”

Chris Ware? “Ware’s strong sense of page and panel constantly breaks down images to almost fractally repeating verticals, horizontals, circles and ovals. Ware suggests synthetically that ‘comic strips are like music notes on paper… when you read them you “hear” things in your mind’; his strong geometrical forces also evoke his Chicago-oriented architectural inflection. His works frequently ask: Is there more than the quotidian in human life? What dream’s if any, can break free of the grid?” Of Julie Doucet’s 1990s series, “Dirty Plotte,” he writes that she found “her artistic voice while being seduced (in all senses) by male objectification. But in extensively picturing animated genitalia and castration… she was responding to S. Clay Wilson and others. Here was a woman interested in taking on that same territory, and defending it, at [knifepoint] if necessary.”

Is this a teachable text? A handy reference? A refresher for those who already know the broad, crashing, coursing contours of such an enormous, teeming canvas? (Almost as large as America itself.) One more taste to see what readers the extended telegraphy might benefit: “Daniel Clowes’ tale of love, desperation, obsession, and time travel, ‘Patience,’ evokes the same feelings of inescapable discomfort that characterized his earlier work, which no amount of futuristic gewgaws can, or are meant to, hide.”