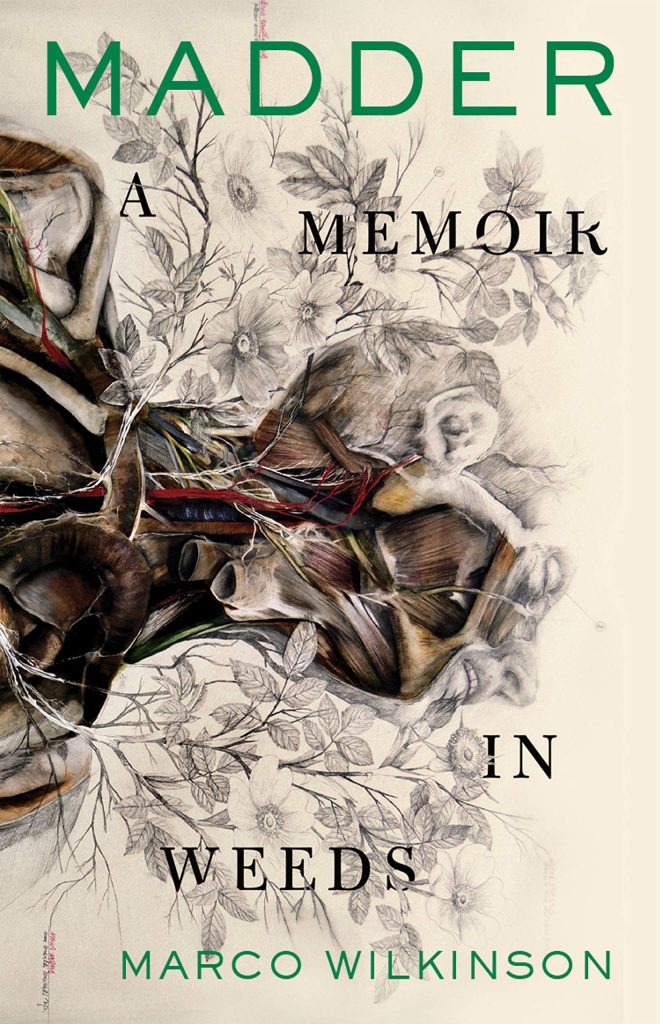 Marco Wilkinson’s “Madder: A Memoir in Weeds” is a haunted memoir. The book, like Wilkinson, is haunted by the fact that the author has never met his father. A father who is alive. A ghost father. Wilkinson points out early in the book, “remember that there is no such thing as absence, only ache.” Wilkinson’s poetic prose, his use of poetic devices, especially his use of repetition, makes us feel the ache of his missing parent. “Madder” is a book wonderfully more concerned with questions than answers. As is often true in life, even answers come with more questions.

Nature—weeds, soil, plants—is the main source of metaphoric language throughout the book, which beautifully weaves the strands of Wilkinson’s life, especially in the sections about his queerness. Wilkinson uses his horticulturally trained descriptive powers to combine nature and sensuality in a gorgeous moment of queer male intimacy when he describes a massage during a trip to Southern India: “His fingers descend into the oil, into me, effortlessly. Small circle, little fish mouth kissing at the limit of self, opening, caught on a hook, burning in a net of water, squirming to be free or to be caught entirely.”

Sexual or romantic male intimacy is not the only type of intimacy between men presented in “Madder.” Wilkinson finds emotional connections, father figures, in people such as John, “my forest guide for this mushroom foraging class” or more fleetingly with the barber that shaves Wilkinson’s beard off, “Barber scrutinizes his work with a patient eye, and I wonder if I had even had a father growing up would he have loved me the way this man loves me right now.” Wilkinson’s sentiment about the barber makes me wonder if this experience of unexpected fatherly love is common among queer men. Unlike Wilkinson I grew up with my father, but he has always a ghost even before he died. It’s been other father-like figures that made me feel loved in the way my own ghost father didn’t.

Ghosts are mentioned directly in the book and as “Madder” shows us, the living can certainly be ghosts. One of the big revelations of the book is that the author and his father share the same first name: Marco. Wilkinson doesn’t know this until he’s twenty-one when he starts to ask more questions about his father. Both him and his mother could be haunted by the name. A ghost spoken whenever either says his name, the author’s name. Knowing a ghost’s name is said to give you power over it. There are indications present in the narrative that this does happen for Wilkinson as when he decides it is safer for him to assume his father is dead. However, many ghost stories come with one last twist, and this haunted memoir does have one. One I will not spoil here because “Madder” is an immersive journey, a foraging we’ve been fortunate enough to be invited on.