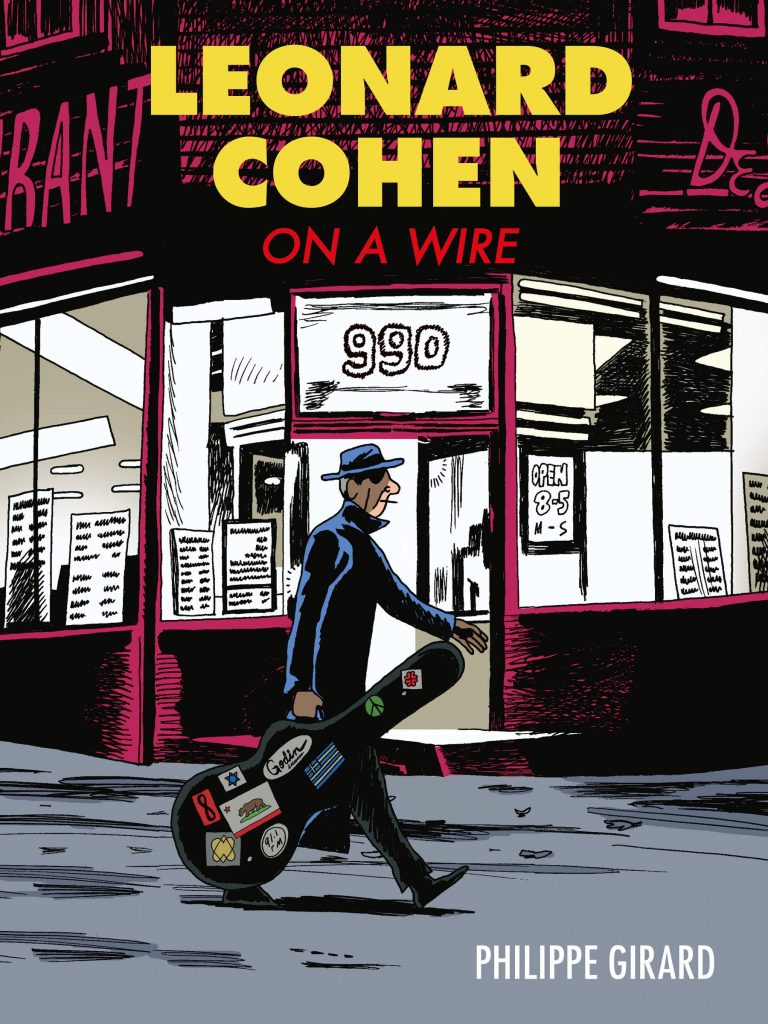 A conventional biography clocks in at well over 300 pages, meaning graphic storytelling will be limited when it tackles the form. Most cartoonists resort to compressed time or subject matter, especially in the relatively commonplace comics memoir.

In telling the story of the late poet and musical genius Leonard Cohen, Philippe Girard opts to depict most of his entire eighty-two-year life in 120 pages of comics; in doing so, he adopts an episodic form, showing distinct moments rather than attempting to create a cohesive narrative. In this manner, it comes across the way we experience memories, in patches, but thankfully, in chronological order here. Girard’s straightforward drawing style keeps the narrative flowing, but it’s not likely to win any awards for graphic creativity.

We see Cohen first as a college student at McGill, a young poet at home in Montreal with his mother, then evolving quickly into his peripatetic life as a musician, moving from place to place and lover to lover. His famous affairs, like his hookup with Janis Joplin at the Chelsea Hotel and his long relationship with Joni Mitchell, along with encounters with Phil Spector and Lou Reed, are passages along the way as his career builds. In one scene, in 1984, he confidently plays his new record—which includes both “Hallelujah” and “Dance Me to the End of Love”—for legendary music industry executive Walter Yetnikoff who responds, “This album has zero commercial potential” and refuses to distribute it in the United Staes. Cohen carries on, writing and recording and slow-building a much bigger fan base (including me, in the early nineties, thanks to then-Newcity art director Jorge Colombo, whose passion for the artist was contagious). Eventually, Cohen gets the fame he deserves, thanks in part to a popular cover of “Hallelujah” by Jeff Buckley. Cohen reaches a place of tranquility, but before long, his manager rips off his life savings, which forces him to head out on worldwide tours in the 2000s to earn money.

Fans of Leonard Cohen will find the book captivating. I read it with my phone beside me, looking up further details of sections online and playing songs as they surfaced. It’s probably not the vehicle to introduce the artist to someone new—and frankly, everyone needs to know Leonard Cohen—as it works more like a collection of B-sides and rarities; invaluable to the fan, likely indecipherable if not.