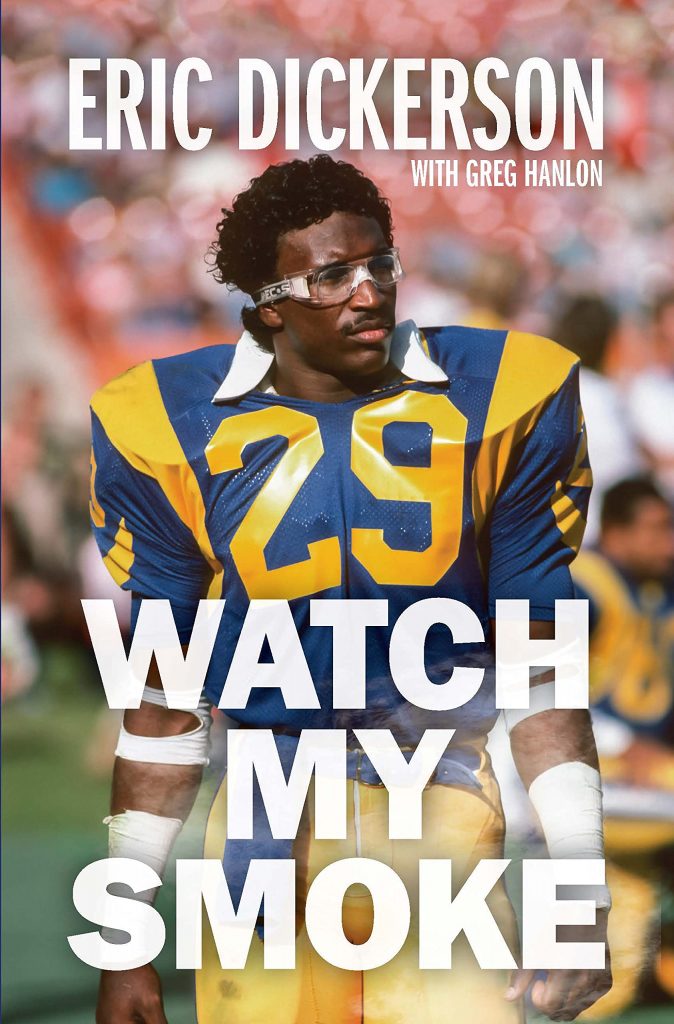 When Eric Dickerson was growing up in Sealy, Texas in the 1960s, his mom said to him, “It’s just different for us.” She wasn’t talking about the Dickerson family in particular, but about Black people in general. In Dickerson’s memoir, “Watch My Smoke,” her statement echoes throughout, a testament to the enduring influence of his mom on his life and the appositeness of those words through the stages of a Black life. “It’s just different for us.” In high school, where Dickerson emerged as a star running back, his white coach would call QB sneaks near the goal line. Instead of calling the play for Dickerson, this enabled the quarterback, also white, to score the touchdown, leading to his name appearing in the paper the next day. “To this day,” Dickerson writes, “I’m convinced he was doing that just to fuck with me.”But Dickerson’s talent was undeniable. He earned a scholarship to play at Southern Methodist University, in Dallas, and from there a professional contract with the Los Angeles Rams as the second overall pick in the 1983 NFL draft. Much has been made of his exceptional size and speed. But according to Dickerson, his greatest asset was his feet. “When you have good feet, you’re balanced when the defenders aren’t, and your body is always in a good position to do the next thing.” His running style appeared effortless—so much so that one of his coaches thought he must be jogging out there. “I was one of those athletes that made it look easy. I have no doubt this played into the public perception of me. To a lot of people, I was a Black guy going three-quarter speed making lots of money who had the audacity to complain he was underpaid.”

“Watch My Smoke” is a memoir of public perception versus depth. As a kid growing up in the eighties, I recall the dominant one-dimensional Eric Dickerson media narrative presented to the public. Perception: He was greedy, selfish, a troublemaker because he held out for more money at the beginning of the 1985 season. Depth: In only his second season, he had set the single-season rushing record, one of the most prestigious and grueling records in a violent sport (one which still stands today). Seeking fairness, he felt his performance warranted a raise. At the time he was being paid one-tenth what his peers were paid.

Consider this: Two years earlier, John Elway, a white quarterback out of Stanford and the lone player drafted ahead of Dickerson in the 1983 NFL Draft, outright refused to play for the Baltimore Colts, the team that drafted him. A two-sport athlete at Stanford, Elway announced he’d go play baseball if the Colts didn’t trade him—all before he’d ever taken a snap in the NFL. The Colts capitulated, and Elway had a long career with the Denver Broncos, becoming a sentimental favorite to win the Super Bowl after a string of unsuccessful attempts. Dickerson, meanwhile, was labeled “Eric the Ingrate” by the media and traded a few seasons later. “It’s just different for us.”

Dickerson also addresses his role in a corruption scandal at SMU that made national headlines. “The real scandal isn’t how much I got paid, it was how little.” He contends the NCAA exploits its athletes. There’s evidence the National Labor Relations Board is now open to investigating this idea. This past September, more than five years after the NLRB rejected a claim to unionize by Northwestern University football players, its general counsel reasoned in a memo that under the National Labor Relations Act some NCAA athletes should be considered employees and thus able to unionize.

A strong sports memoir, “Watch My Smoke” balances biography and perspective with on-the-field action, making you feel what it’s like to compete at the highest level of sports. I’ve never felt closer to the field—and happier to be just a spectator—than through Dickerson’s in-game encounter with legendary New York Giants linebacker Lawrence Taylor. There’s self-aware humor (“the first Eric Dickerson recruiting war”) and Dickerson’s appreciation of the look of sports, which includes a terrific chapter about his singular sense of style when it comes to uniforms. The book is written with Greg Hanlon, an editor at People.

Despite the turbulence he experienced in his playing career, Dickerson sits securely in the top ten all-time for career rushing yards in the NFL, he’s in the top five for rushing yards per game and is in the NFL Hall of Fame. More than thirty years after he was traded from the Rams, he has reconciled with the organization and is now vice president for business development. He is valued by the team’s fans for his willingness to speak the truth.