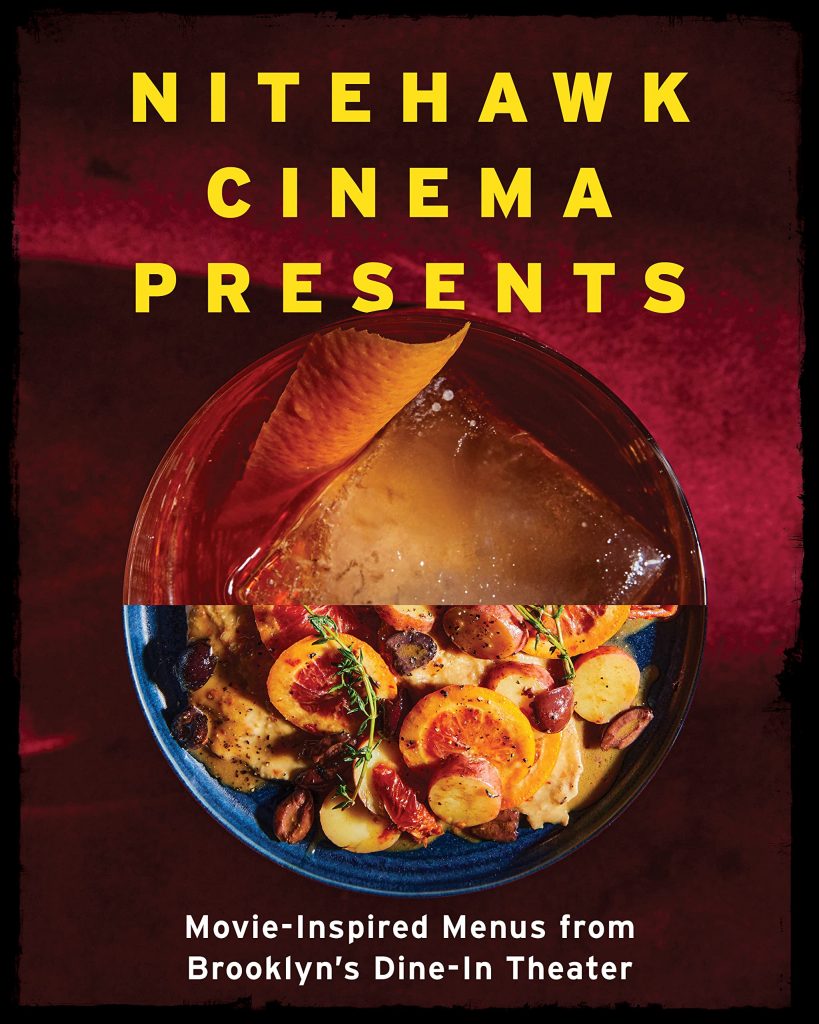 Dine-in movie theaters: Are they truly a “movement,” as claimed in “Nitehawk Cinema Presents,” or just a hipster fad? Let posterity judge. Whatever the case, this thick, large-format volume, packed to the projection room with movie-themed dishes and mixed drinks, is a clever addition to the ever-widening shelf of pop culture-based cookbooks. At the same time, it represents a slightly disturbing milestone in the ongoing transformation of what was once quaintly known as “real life” into a never-ending cosplay carnival of militant escapism. The trend, launched back in the 1970s by the “Rocky Horror Picture Show” midnight-movie phenomenon with its ritualized audience participation, is saluted at length in this book.

Some backstory: Since 2011, the Nitehawk Cinema has been bringing imagination, digestion and intoxication together at its two Brooklyn locations, the first in once-Hasidic Williamsburg, the second in cute, yuppified Prospect Heights. Founders Matthew and Rebecca Viragh sought to “enhance the cinematic experience” by pairing grub and grog with archival 35mm projection, spiced by special guest Q&As.

It wasn’t easy getting started, as the couple had to lobby state government to rescind a Prohibition-era law banning the sale of alcohol in movie theaters. One month after Nitehawk opened, then-Governor Andrew Cuomo overturned the old statute, and the rest was punful menu-planning and cocktail-contriving history.

The Viraghs and their staff of programmers, chefs and bartenders had a hit on their hands, based on the enterprise’s expansion from the intimate, three-screen Williamsburg space to the big multiplex near Prospect Park. In cinema-saturated New York City, the Nitehawk recipe of matching expertly screened first-run and revival films with tailored potations and entrees has proven deliciously different.

Confession: I’ve never patronized Nitehawk or any other eat-in movie theater. So I cannot state with any degree of certainty whether flicks go down better with a rum and smoked jerk tincture (“The Harder They Come”), Minnesota cheese curd with edible gold leaf (“Purple Rain”) or Welsh rarebit with caramelized onions (“Inside Llewyn Davis”) than with a bucket of over-salted popcorn and a side of stale Jujubes.

But by Kubrick, some of these combos really do sound like fun. What filmgoer with a hint of whimsy could resist accompanying “The Shining” with a glass of hibiscus-colored Red Rum, or watching “This Is Spinal Tap” while enjoying the Intravenous de Milo, a Pimm’s-powered drink that “goes to 11”? And I could definitely see ordering the Type O Negative, a blood orange-tinged boozy popsicle, to liven up a screening of “Only Lovers Left Alive,” Jim Jarmusch’s uber-artsy vampire movie.

Local readers will find one item objectionable. The so-called Chicago-style hot dog, featuring an all-beef dog “dragged through the garden” (a phrase I’ve never actually heard used hereabouts), includes ketchup, thus rendering it not only inauthentic but inedible. The recipe goes with the Chicago-filmed “High Fidelity,” but it would be better paired with “The Unforgiven.” For shame. If Nitehawk ever expands to Logan Square or West Town, this page will have to go.

One other quibble: If it were up to me, the book would include more than one beloved Golden Age classic. (That one is “Casablanca,” featuring a lamb tagine dish dubbed “A Beautiful Friendship.”) Clearly, it’s aimed at readers and viewers for whom “The Big Lebowski,” made in 1998, already seems like a nostalgia-drenched relic from a vanished world.

Not being a member of the book’s target demographic, I asked my Generation Z daughter what she thought of it. Her comment/endorsement: “If you love cookbooks based on media as much as I do, you’ll love ‘Nitehawk Cinema Presents.’ With this book, you can turn your own home into a dine-in movie theater.”

Just as Nitehawk succeeded in making moviegoing more homelike by adding food and drink, so this cookbook will inspire readers to make their home life more mimetic and cinematic and generally cool. Where will it end? Maybe with a movie version of the Nitehawk story, allowing the theater’s customers to watch themselves—preferably while in costume, playing themselves—on the big screen and vicariously participate in their own spectatorial lives. A revised version of the cookbook would enable others to reenact this strange auto-voyeurism in their own home, while sipping a relevant aperitif. It could be called the Mise en Abyme cocktail, a postmodern concoction made with Cointreau and other French ingredients potent enough to soften the bounds of reality and make “Rocky Horror” with food seem as enriching an experience as “Citizen Kane” without. (Hugh Iglarsh)