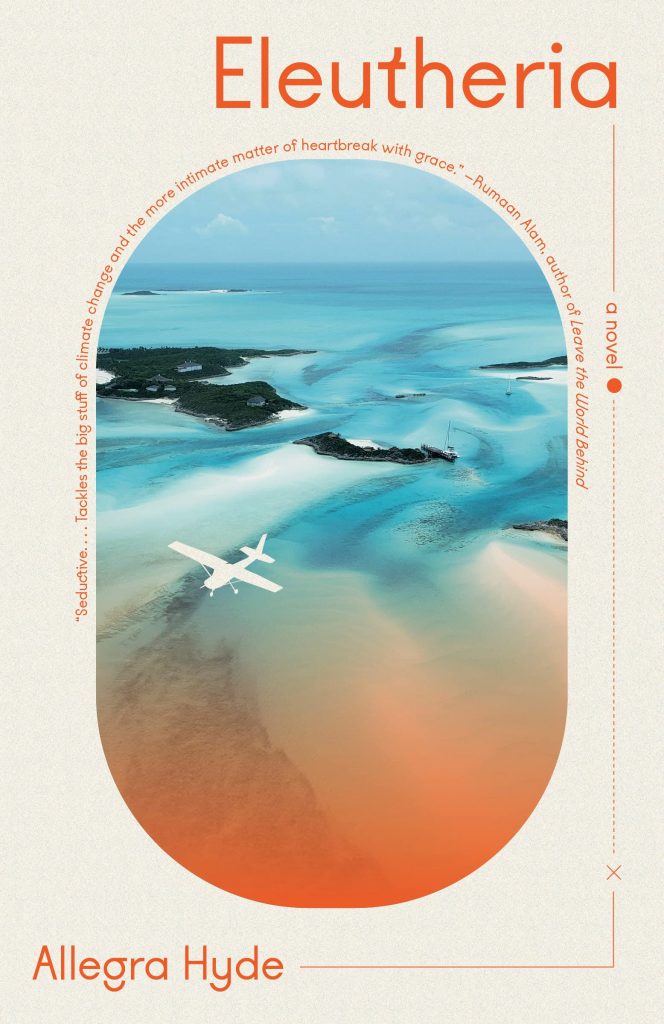 In Allegra Hyde’s debut novel, “Eleutheria,” the state of the world comes at the reader in serial bursts: “Torrential rain spurred landslides in China, smothered whole cities. Spore-laced dust storms forced mass evacuations in Australia. There were the ongoing food shortages—a drought squeezing Brazilian soy, a wheat blight hitting Russia—along with the desperation brewing on the force of that hunger.”

Closer to home: “Toxic algae bloomed in Boston Harbor. Mass Mortality Events increased; one weekend, thousands of mice crawled into the streets to die; the next, ninety-three bottlenose dolphins washed up in Plymouth. Meanwhile, the tick population exploded—and with that came tens of thousands of cases of Lyme disease, which resulted in even inner-city parks being doused in chemicals. Then there was the pollen.”

What reads like a doomscroll is the planet filtered through the consciousness of Willa Marks, the novel’s young protagonist. She is narrating a near, if depressingly recognizable future. And while a typical response to news of this nature can be to hole up, internalize, shut down and feel powerless, or perhaps doomscroll some more, Willa is determined to take action. She believes “despite the odds, a small group of people could change the world for the better.”

She has been inspired by a text called “Living the Solution,” ascribed to a shadowy former Army general with a Chuck Norris mythology. His text presents a vision for rescuing the planet, and shows a path toward a sustainable future, beginning with mobilizing a diverse group of individuals with useful skills and important connections to staff and model a “carbon negative” and “problem-solved” settlement called Camp Hope. It is located on Eleutheria, an island fragment in the Bahamas.

Willa’s arrival at Eleutheria sets the novel in motion. The other Camp Hope crew members are already there, preparing to “launch” their enterprise and go public, sounding as much like an IPO as a society intentioned on staving off climate disaster. Camp Hope features its own tagline: “TO PRESERVE AND PROTECT—TO CONSERVE AND CORRECT.” There are even forms to fill out and a contract to sign. Apparently no threat is too existential for a little paperwork.

Willa’s hope and idealism are tested early and often. Roy H. Adams, the former Army general, is missing. The crew is icy to her as she is a latecomer to camp (as opposed to an early adopter). She finds Eleutheria and its surrounding waters littered, literally, with traces of idealism, colonization, failed experiments. A fragmented parallel narrative documenting the island’s bothered-with past contrasts with the current events of the novel. One of the underlying questions posed in “Eleutheria” is: What have we learned in the past 400 years?

“Eleutheria” is very much a novel of ideas, taking up social movements, the survival of ecosystems, questions of morality when faced with scarcity, local versus global needs. Early in the book, Willa admits to being “drunk on ideas.”

But for all its theoretical concerns, the novel spends little time in the abstract. It’s tactile in a number of ways. With the imprint of human movement and activity on the planet. With Willa’s language, sticky in its descriptions. Here she is describing riding Boston’s T: “I descended into a light-flickering T-Station. A train pulled in. The crowd jostled me against an oily, fingerprinted pole. More passengers crammed together. They wriggled and writhed, their laughter merging with screeching brakes, the garbled intercom announcements.” Here’s her sensation of Boston after a childhood raised isolated in the woods of New Hampshire by survivalist parents. “In reality, Boston overwhelmed me. The brick-built topography felt like a giant fireplace poised to burn me alive.” And, in another, more primal way, with Willa’s longing and craving for human touch. In Boston she is drawn to a Harvard sociology professor, Sylvia Gill, and they become involved. At one point she says about Sylvia, “She cupped my face in both hands, and my breath hiccupped—because her touch undid me. Her touch remained the most powerful force I knew.”