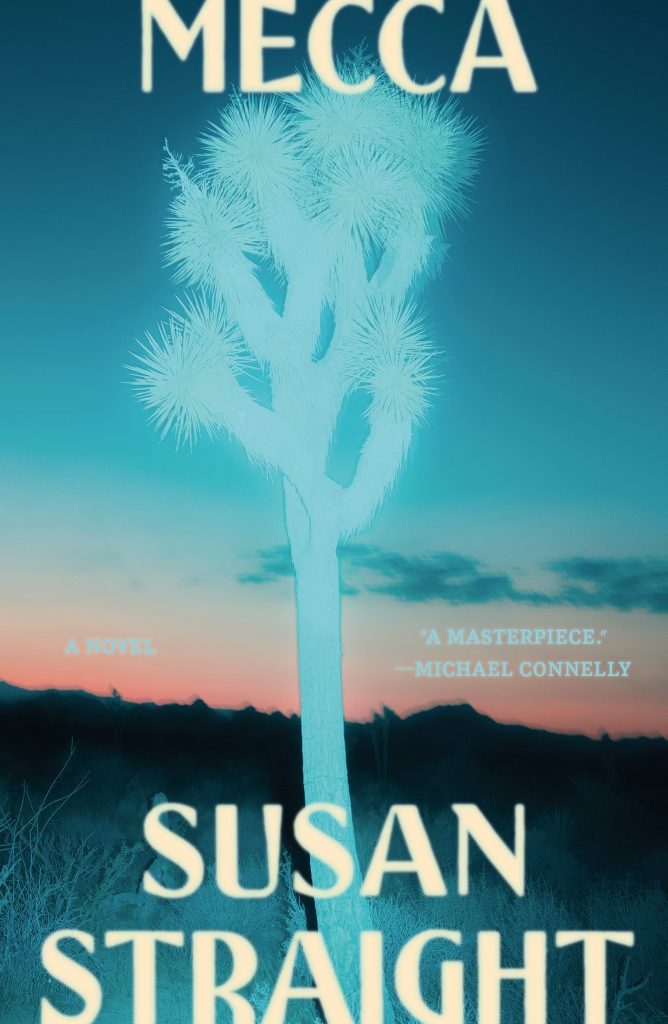 Susan Straight’s “Mecca” is a modern American epic that is as rich and vast as its Southern California landscape. The novel opens with Johnny Frías, a highway patrolman whose steadiest companion is his Harley. The descendant of Mexican settlers and California’s Indigenous people, Johnny faces daily racism from people he pulls over. Johnny is more anchored to the past than his present, and as Johnny weaves in and out of memories, we feel as though we are riding along the California highways and observing the canyons with him.

One trauma has shaped Johnny’s life. At the age of twenty, shortly after he became a patrolman, he witnessed the brutal rape of a young woman in Bee Canyon. In response, Johnny shot and killed the rapist, but when the woman ran away, he was left without a witness. It is Johnny’s greatest fear that his twenty-year-old crime will be discovered: “Every time there was a wildfire, I hoped it wouldn’t burn deep into Bee Canyon, because if his skeleton wasn’t gone, and the Sikorsky helicopters dropped water in that ravine, they might finally wash him out of the grave I dug with a pick—all I had—and the rocks I laid on top to keep him there.”

But this is no crime story, and the murder is more of a backdrop than an inciting incident. The story’s multiple narrators, who tell their stories in a myriad of styles, are in some way connected to Johnny. They include eighteen-year-old Ximena, who recently entered the United States from Mexico without legal permission; Matelasse, who is separated from Johnny’s friend; and Dante, the teenage son of Johnny’s friends, whose pandemic storyline brings the novel into the present moment. Most of the characters do not fit into the racial categories that Americans use to identify people. Matelasse, for example, traces her family to a Louisiana plantation and is often mistaken for Native or Mexican, and her Black ex-husband, Reynaldo, whose mother is from Mexico, tells people he is Brazilian because “‘It’s dangerous here in America for a Black man.” His last name, “Rodrigue,” comes from the Spanish man who owned his enslaved ancestor. Though Straight’s characters show the limits of racial categorizations, that does not prevent people from categorizing them—something tragically seen in one of the novel’s most memorable chapters.

As in Straight’s other work, which includes the National Book Award Finalist “Highwire Moon,” connection to the land plays a vital role. Johnny may be the character who brings the cast together, but the Southern California landscape—which ranges from a Coachella plastic surgery center to the San Luis Rey de Francia mission—is the true protagonist. Each chapter begins with a subheading such as “The Santa Ana River” or “Old Route 66, Rialto and San Bernardino,” and “Mecca”’s Southern California is as vivid as seeing it in person. But despite beautiful descriptions such as “The blue edges of new dark while the sky figured out how it would turn the world around this evening,” Straight never loses sight of the lands’ darker undertones nor loses herself in sentimentality. In Southern California, a natural disaster is always lurking, and “the tall arundo cane and eucalyptus trees” are always a moment away from “[going] up like torches.” This is stolen land, and by extension, it is tied to loss and grief.

Straight also understands that for many of us, family lineage is more about absence than presence. Though Johnny’s maternal family has lived in the Canyon for generations, not all Straight’s characters have the same history with Southern California. Matelasse’s deepest connection to her own family land is through her name, which refers to the Louisiana sugarcane plantation her grandmother used to work in. Matelasse’s mother, however, forgot her name’s meaning, and simply chose the name because it was pretty. In a similar vein, the novel’s title does not refer to the Islamic city but the California town where the Torres Martinez Indian Reservation is located. For Ximena, who was chased out by ICE, Mecca is the place she dreams of returning to above all else.

Susan Straight is a gifted author with two essential traits: deep empathy for her characters and the ability to challenge us. Whether enjoyed as a sweeping epic or as individual short stories, “Mecca” is a novel that should not be missed.