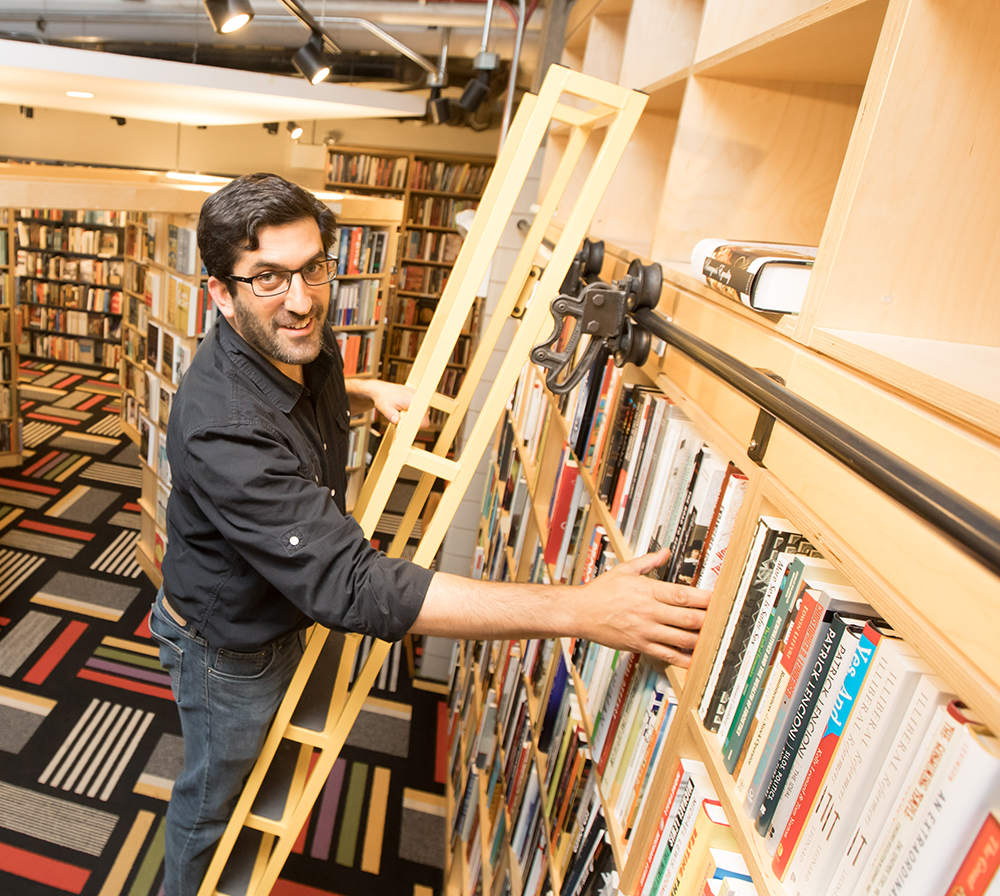 The Seminary Co-op Bookstore in Hyde Park is one of the world’s great academic bookstores. It has tens of thousands of volumes in stock. In 2018, the Sem Co-op sold 28,000 books. Of those, over 16,000 were titles that sold only one copy that year. “That means it’s one book, one title to one customer for the year,” says Jeff Deutsch, the director of the Seminary Co-op who steered the flagship shop and its sister store, 57th Street Books (one of the city’s great neighborhood bookstores), from its former, unsustainable cooperative structure to not-for-profit status, effective in 2019. In the wake of competition from Amazon and other pressures, the famous store proved unviable as a business. University of Chicago President (now Chancellor) Robert Zimmer believed the store essential to the school’s place as a world-leading institution and committed the university to the Co-op’s retooling and financial rescue. Private donors also helped prop up the business. And the store’s co-op board voted to end its status as a cooperative and begin life as a not-for-profit, somewhat akin to other cultural institutions that survive on combinations of sales and community support.

Deutsch’s own book, “In Praise of Good Bookstores,” appears this spring. It is an intelligent, literary love letter to the Hyde Park stores and to bookstores everywhere. His greatest fondness is reserved for the browsable, terrestrial, brick-and-mortar shops for which, Deutsch cogently argues there has never been, and may never be, a robust for-profit model. “Inefficiency,” he says, “is incredibly important to bookselling.” It is also a manifesto for what Deutsch sees as a necessary future for bookstores. He makes the case that a radical shift to not-for-profit status offers a structure to stabilize the timeless values of local places to browse and buy books.

I should disclose a particular and practical fondness for the Sem Co-op. It is one of the features that makes Hyde Park, where I live, generative for writers. The Sem Co-op virtually assures that books on all topics exist nearby for buying and browsing. It is also a space that stirs conversation about books. There is the parade of authors who come to present at the more-than-daily events—around 700 in 2019—the store hosts and sponsors. In addition, for visitors to the store, there is the chatter with bookish browsers and the preternaturally well-read staff that makes not just books, but their readers passports to many… Well, other books and ideas. From the outside it may be hard to appreciate just how thoroughly Hyde Park is a neighborhood of writers. Not just the university types. It’s also lousy with poets, novelists, reporters, memoirists, activists, independent scholars, ministers with pens and self-help gurus. My twelve-flat apartment building is practically a book factory. 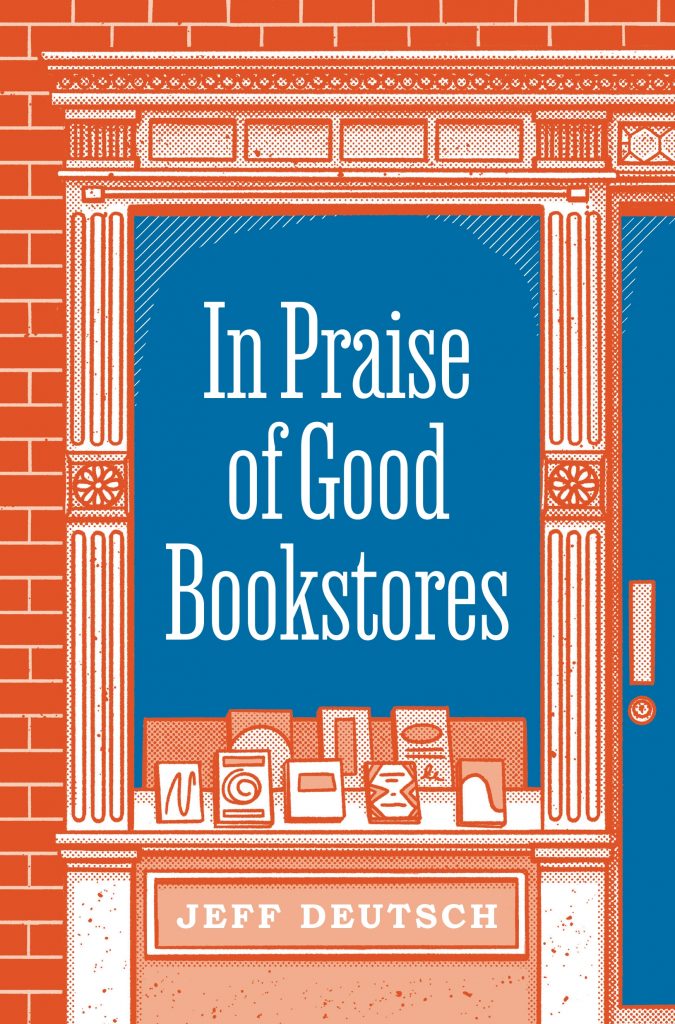 For me, giving a talk on one of my books at the Seminary Co-op is a rite of passage. When I called to talk to Deutsch about “In Praise of Good Bookstores,” I opened the conversation with how much I liked his book, but also mentioned I was writer Elly Fishman’s dad. Deutsch interrupted to say how much the stores’ staff loved Elly’s book. Honestly, after that, how could my interview with him be anything but softball? Happily, he threw in some hardball observations about his trade and industry. Here’s an edited version of an hourlong interview that compresses both questions and answers.

Can you take us to your beginnings as a bookseller?

My entire career has been as a bookseller. I started in 1994. My hope was to have a career as a bookseller and to make recommendations, haul boxes and to do the things that booksellers do.

The Seminary Co-op you joined was struggling as a business and in need of change?

I never anticipated trying a new model or that the Seminary Co-op would be the first not-for-profit bookstore of our type. There were challenges we needed to face. Yet, we as booksellers have long apologized for the inefficiencies that are critical to our work. The economic models of traditional retail don’t generally apply to good bookstores and especially do not apply to us. Beyond that, it had been hard to describe, even to folks who are predisposed to believe in us and support us, the ways in which the Co-op is different from a traditional bookstore. And it’s well past a good time to establish a new model.

Is the goal of “In Praise of Good Bookstores” to shift the understanding among lovers of stores like the Co-op?

What do you think has been blocking the public from seeing bookstores more as cultural places than as retail endeavors?

I think first and foremost, we devalue the book. All of us have. It’s hard to say that out loud, because obviously people’s finances are what they are and people decide for themselves how to use their money. Other industries have seen inflation over time, but the book industry, mostly because of Amazon, Costco and other mass retailers, has actually seen a depression in list prices so that a book is considered a bargain when it’s thirty-percent off and not a good purchase at full price. That doesn’t acknowledge all of the years that go into writing it, editing, designing, marketing it and producing it. There is so much that goes into a book.

Aren’t many books published for these discount mass markets? I was recently at a branch of Half Price Books, the big discount used book seller in the suburbs, and it seemed that a vast number of titles they sell burn short and bright.

Most books are not published for the moment. They’re not meant to sell quickly like some mass media product. Many are written for the ages and they might sell slowly, but are meant to be in print for decades or more. And there’s a model to support that which is used by other places such as nonprofit presses, or theaters, or the opera and experimental music venues. They’ve figured out a funding model that works. Booksellers [by and large] have not done that yet.

Authors are part of this publishing world, too. And the kinds of writers who turn out most of the thousands and thousands of titles may also be getting devalued [economically]. There’s no not-for-profit model for us. It’s eat what you kill. Where does that fit in?

There are plenty of authors that have a not-for-profit model, and who work with grants and residencies and who try to raise funds through the not-for-profits in other ways. But you’re right, this isn’t about bookstores only. It’s about how we think about publishing as about commodities and not about these cultural gifts or how we should value them. 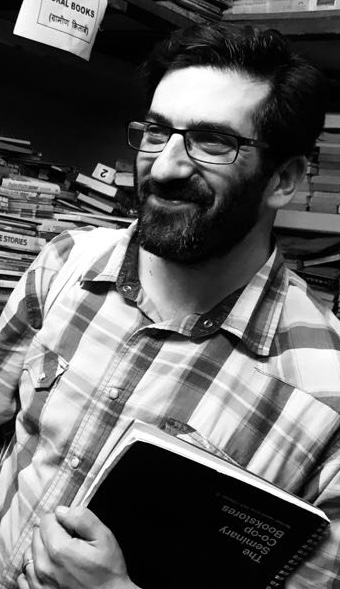 How would you describe a bookstore as something other than a business?

Part of the argument we’re making as a store is that this is not bookstores battling libraries or even Amazon. Book producers, writers and editors, designers and agents, distributors, bookstores, librarians and all these places devoted to books ought to come together to separate the mass books from the books that are meant to endure. There’s nothing wrong with “Star Wars” books, or Lego books and there are so many great cookbooks and so many other kinds of books. But what we’re talking about is a certain kind of book that’s written for the ages. It doesn’t matter if it fits in a genre or not, it’s just that the book is meant to endure. Those books should be treated differently. They’re not going to make back their advances, the author may or may not make a living as a writer.

Something like three-quarters of the books on our shelves were published a decade or more ago. A lot of what we do is about backlists [books from previous years] and keeping books in front of readers. We meet with publishers a few times a year and they pitch us their new releases. And I often say to them, “Oh, yeah, that book you pitched us five years ago, I finally got to it and it was great.” One of those books we’re featuring right now. Why do we need the newest thing all the time? In fact we do not. Bookstores will often focus on backlisted classics or contemporary classics.

Can you walk me through the consequences that happen when a bookstore vanishes from a community?

There’s an argument that if people wanted a store, they would support it. But that’s a difficult argument to make when there’s no model to support the store. Not every community necessarily wants or needs a bookstore that carries the kinds of books we do. But there’s something about the persistence of these stores and how they reflect and create the communities they serve. They speak to a deeper yearning of people in those communities. We have an incredibly diverse audience. People are local and global, from different classes and ethnicities and they come together over a shared love of books. We have diehard fans of the store, and it matters to them almost like a religious institution. It’s a place people come to contemplate, to understand, to ruminate and maybe to articulate their own thoughts, even if just to themselves. That’s a critical part of our work. Some people come just to browse and don’t buy anything. That’s important, too, and totally okay. Part of our work is creating spaces for browsers and communities.

Ted C. Fishman is a Chicago-based writer and the international best-selling author of “China, Inc.” and “Shock of Gray.” His books appear in twenty-seven languages. In addition to Newcity, the many publications he’s written for include The Atlantic, The New York Times Magazine, Esquire, GQ, National Geographic, Harper’s, The Wall Street Journal, USA Today, Chicago Magazine and Chicago Reader.