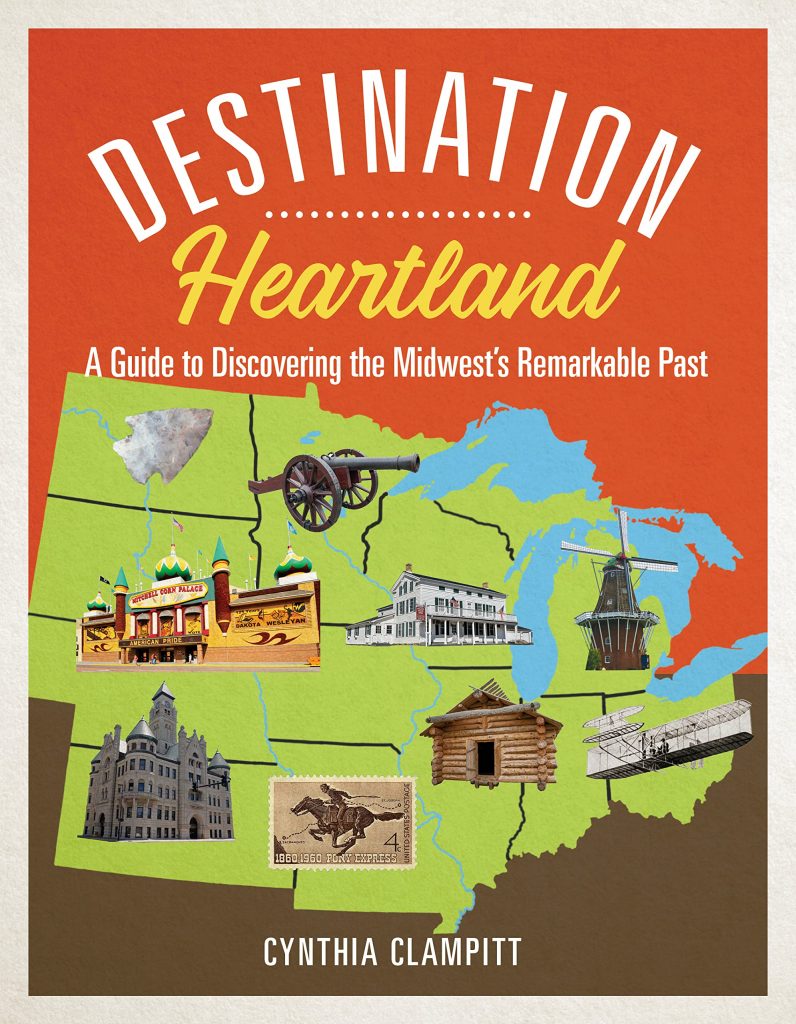 Ask ten people to define the Midwest, expect eleven different answers. It’s a collection of states in the middle of the country, a place to fly over, a state of mind, a set of values, a cultural sphere, a farming cooperative. Merriam-Webster is carefully noncommittal, owing to the general swampiness surrounding the term. It defines Midwest as the “region of indefinite boundaries in the north central U.S. including the area around the Great Lakes and the upper Mississippi River valley—often considered to include the area from Michigan, Ohio, and sometimes Kentucky on the east to North Dakota, South Dakota, Nebraska, and Kansas on the west.” The federal government configures it in different ways, depending on the agency. The comedian Charlie Berens says it’s where one rolls down the window to ask permission before changing lanes.

Early in “Destination Heartland: A Guide to Discovering the Midwest’s Remarkable Past,” Cynthia Clampitt offers a primer on the term, beginning with establishment of the Northwest Territory in the late eighteenth century on to the Homestead Act and through the region’s persevering identity captured in such labels as “Corn Belt” and “Heartland.” It’s useful pocket history for enhancing the experience of what’s to follow, but ultimately Clampitt’s interests in “Destination Heartland” are less of the textbook variety. “I want to get you on the road,” she signals in the introduction. To which Midwest this road leads, she settles the question without much fuss or handwringing, identifying twelve states she’ll send you out to explore (the same Midwest grouping used by the U.S. Census Bureau).

Clampitt is an Illinois resident and food historian. She came up with the idea for “Destination Heartland” while researching her previous books, “Midwest Maize” and “Pigs, Pork, and Heartland Hogs.” She had visited or passed by intriguing historic sites that sparked her curiosity and inspired this more generalized investigation (though fans of her first two food books will still find nourishment here).

In more than a hundred heartland destinations that cover over a thousand years, her entries range from a few paragraphs to a few pages. These function as reviews and are filled with history, context and first-person narrative. Throughout she remains a buoyant guide, open to discovery, summoning a renewable sense of wonder as she visits countless frontier villages and replica blacksmith shops.

For those in the Chicago area, there’s a whole slew of one-tank trip ideas, many unfamiliar to me. After reading her description of the Grove, a prairie grove in Glenview and a National Historic Landmark, I went for a visit, her book having the intended effect of getting me on the road. To say nothing of the site’s historical and cultural value, the trip was worth it alone to see the 300-pound, 130-year-old alligator snapping turtle on display in the nature center that the Grove had rescued from becoming turtle soup at an area restaurant.

Using the guide from your couch can also yield chestnuts, such as the entry for the National Historic Cheesemaking Museum, in Monroe, Wisconsin. In her review Clampitt references the National Cheese Exchange that operated for much of the twentieth century in Wisconsin, where every Friday morning members met for thirty minutes to buy and sell cheese, thereby influencing cheese prices across the United States.

But guidebooks like this still must compete with the internet since most or all the core information is only the right keyword search away. Clampitt’s value proposition is the way she catalogs her entries, into sections on how one might experience all the historical destinations she’s included, such as through living history, reenactments (she spent a few years as a Revolutionary War re-enactor), museums or even doing it yourself—were you aware there’s a 150-year-old lighthouse in Traverse City, Michigan, in which you can live for a week as the lighthouse keeper?

Also in her favor, to my reading, she doesn’t always go for obvious places, or rely on population centers to do the heavy lifting. Chicago, called by some the capital of the Midwest, has exactly one site entry—the Chinese American Museum. In “Destination Heartland,” it pays to go into the heart of the heart of the country.

“Destination Heartland: A Guide to Discovering the Midwest’s Remarkable Past”
By Cynthia Clampitt
3 Fields Books, 224 pages