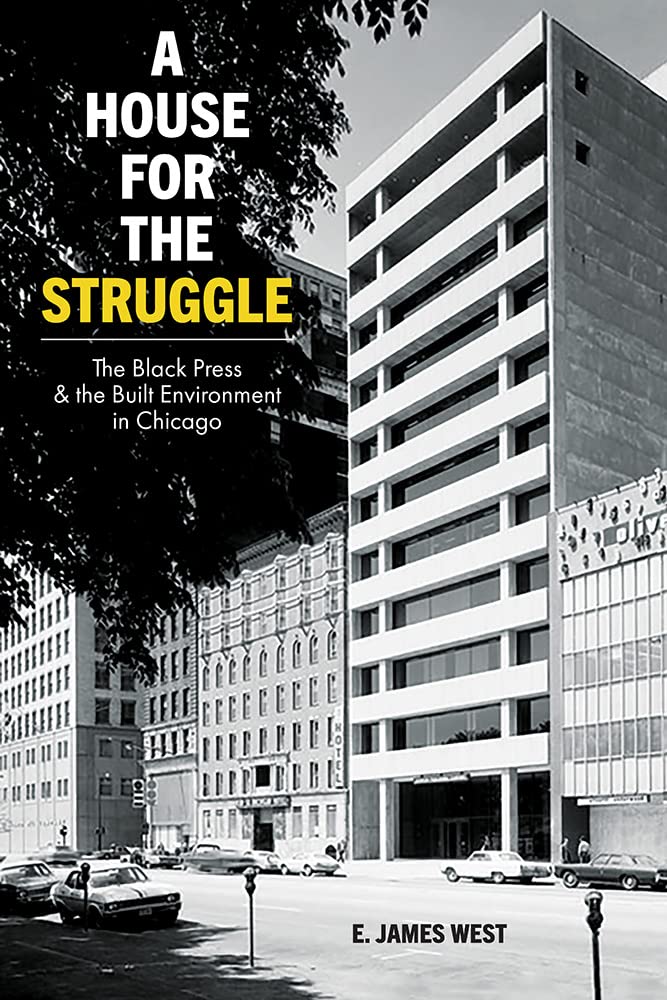 In “A House for the Struggle: The Black Press & the Built Environment in Chicago,” E. James West shows that the buildings of the Chicago Defender, Johnson Publishing Company, The Bee, Chicago Whip, Muhammad Speaks and Black Panther were not only press headquarters but spaces central to their Black community’s quest for racial justice. West maps seventy years of successful Black publishing in Chicago’s South Side and documents how these publishers gained their community’s trust by opening their buildings to host movement meetings, help Black migrants from the South with lodging and job searches, distribute food to the needy, and encourage Black unity and cultural pride through scholarships, art exhibits and events like the Bud Billiken parade.

In analyzing the role of Chicago’s Black “newspaper row” in the fight for racial justice, West concentrates on the two largest presses, Chicago Defender and Johnson Publishing Company. Chicago Defender headquarters became synonymous with resistance when it was founded in 1905 by Robert Sengstacke Abbott in the house of Henrietta Lee, Abbott’s landlady at 3159 South State Street, and the story of Abbott editing copy at a card table with a kitchen chair for seating will always be moving. Abbott had turned from a law career to journalism in order to “fight for Black rights and help to expose… racial injustices.” Through his newspaper, he urged Southern Blacks to immigrate to Chicago and then helped them get their bearings in an urban environment radically different from the rural one they’d left behind. Chicago Defender reached a national circulation of 250,000 and in 1921, Abbott relocated from Lee’s house to a former synagogue that he remodeled at 3435 South Indiana Avenue. E. James West argues that Chicago Defender’s success made visible through its large headquarters became a source of South Side racial pride, and stresses that Abbott continued to open his doors to all who wanted to enter and organized events such as the Bud Billiken. Geared for children and launched in 1929, today it’s the largest African American parade in the United States.

John H. Johnson entered the newspaper business in 1942 when he began publishing Negro Digest (modeled after Reader’s Digest) while working as a clerk at Supreme Life insurance company. The Digest’s appeal was so great that its circulation of 3,000 went to 50,000 within a year. Johnson then used Life magazine as inspiration for his monthly picture magazine Ebony and the weekly Jet. Both magazines were directed to middle and upper-middle class Blacks who enjoyed reading positive Black achievement stories. Johnson believed that capitalism and assimilation were the keys to Black America’s success, and he worked hard to break the advertising color barrier, eventually acquiring white clients such as Zenith and Pepsi. Once Johnson was financially secure, he left the South Side for the more prestigious North Side, first buying a Gold Coast condominium and then in the early 1970s building his company headquarters at 810 South State Street. “I was tired of working on back streets… I wanted to work on a front street. I wanted to go first class.” Johnson’s 1972 move was criticized by some as an abandonment of the South Side even though Johnson continued to maintain community ties by covering the civil rights movement of the 1960s, making his building open to the public and supporting Black artists, writers and charities. Johnson developed access to Chicago power by cultivating white politicians such as Chicago’s mayor Richard J. Daley and he provided a mainstream solution to the Black struggle by championing Black capitalism as the most effective response to racism.

“A House for the Struggle” is an eye-opening, compelling read in which West shows that Black press buildings on Chicago’s South Side were symbolic of community pride, unity and success, as well as crucial meeting places in the fight for Black autonomy and civil rights. I hope that “A House for the Struggle” will be one of many books that give the Chicago Black community and press their rightful, important place in the history of Chicago and the United States.

“A House For the Struggle: The Black Press & the Built Environment in Chicago”
By E. James West
University of Illinois Press, 296 pages