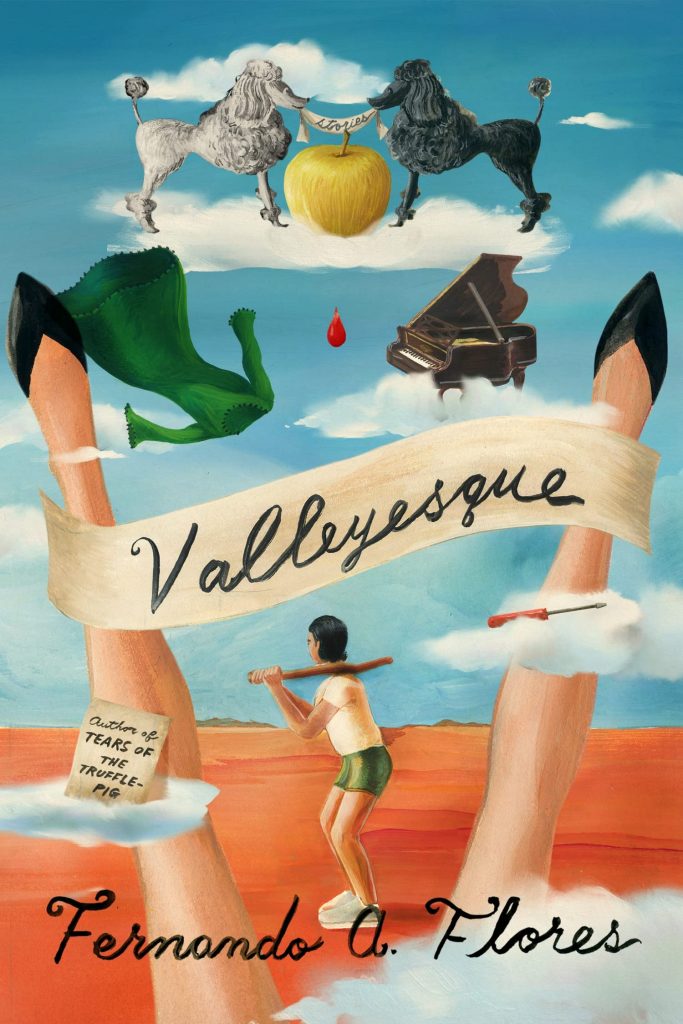 In his new collection “Valleyesque,” Fernando A. Flores doesn’t wait to show exactly what kind of short story writer he is. In the first story, “Queso,” we are treated to a job interview where a man named Marcos answers banal questions like “On a scale of one to ten, how do you describe your collaboration with others upon encountering a tough situation?” with utter nonsense like “First you wring the neck of a big turkey until it flops… Wait until afterward to bring up their sisters and the war.” After his paradoxically successful interview we are treated to the interior of the establishment’s boss, who waxes poetically about the power of Taco Bell-style appropriation. We immediately know Flores isn’t afraid of political commentary or strangeness.

In Flores, we find a writer not unlike Kelly Link. Flores can be speculative, sure, but he’s also willing to get dreamy in a sinister way. In one story, we follow a young woman who, in looking to sell vintage clothing to pay her student loans, navigates an impossibly vast warehouse of used clothing and almost dies in a denim tidal wave. In another story, we trail a muralist trying to figure out his next work, who imagines a highly metaphorical journey alongside the revolutionary Zapata. But Flores is also willing to get stylistically weird too. The realistic “The 29th of April” is written as a Selbyesque one-paragraph, eighteen-page story that captures the uncontrollable descent of a border town to violence. Meanwhile, his most daring piece, “the Oswald Variations,” has a choose-your-own-adventure feature where the reader is allowed to guide the direction of Lee Harvey Oswald’s pre-assassination music career.

The theme tying this whole collection together is a cultural and regional specificity: many of his subjects have Latin American roots and all the stories in the collection take place on the border of Mexico and Texas. Flores captures a place he clearly cares about; he puts a lot of effort in making his Grand Rio Valley feel alive, but it’s also here where Flores gets political. He has much to say about what it’s like to be someone with a foot on each side of the border, especially when one side of it simultaneously exploits you and demands your disappearance. But while Flores has a political dimension to his work, the strangeness helps Flores not be polemical about it, allowing him to smuggle it in under layers of high concept, metaphor, and humor.

To reduce Flores to his political dimension is to ignore how fun he can be. This is a collection with earwax babies, garbage-eating angels and literally bottled pop hits, and how can you not love that? But it’s the political element, when mixed in with the lived-in familiarity of his valley, that gives “Valleyesque” its bite. And it’s the way that he mixes it all, the real and surreal, the humorous and tragic, that makes Flores impossible to dismiss. (Brendan Buck)