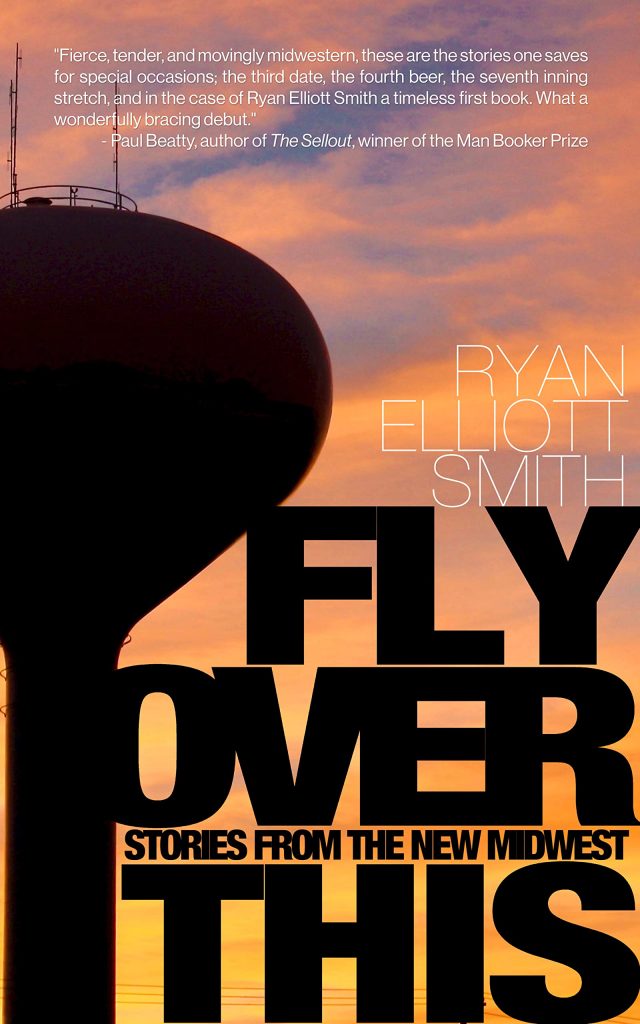 It’s summer in rural northern Illinois. A sour old woman watches the Cubs game in a hot front room, while outside, there’s the swelling sound of rutting cicadas and the smell of exhaust from the highway and fields. An older boy leads a younger boy into a concrete culvert, where it’s cool and musty like a basement, and the older boy has taped pictures of Playboy centerfolds to the damp walls.

This is the start of “The Noise of Youth,” one of eight shining, marvelous stories in Ryan Elliott Smith’s “Fly Over This” about life in northern Illinois, primarily LaSalle County. The reader senses that something awful is going to happen, and it does. The horrors in this summer story accumulate to a heartbreaking pitch.

But throughout this collection, nothing happens that isn’t earned and natural, and the stories are both funny and tragic, full of yearning, magical discoveries and life. There’s love lost and murder, video games, sex and adventure, alcoholism and madness. There’s also the glory of wading in a river on a hot day, watching planes land at O’Hare, visiting the pigeons in Daley Plaza, or holding a lover’s hand in the Lincoln Park Conservatory. Smith has a terrific sense of place—you always know where you are, either in the flatlands of Illinois, or, in the story “Not Originally from New York or: The Misunderstandings,” thinking about Illinois. The stories are universal in the way that the stories of Stuart Dybek or Anton Chekhov are universal—the specificity puts the reader just where Smith wants you, and makes you live through his characters and feel their humanity.

One of the joys of Smith’s writing is his experimentation with language and point of view. The first story, “That Day Where You Live,” tells of teenagers playing hooky. Two boys try to pick up girls, listen to Zeppelin and the Beatles, get drunk and get in more trouble than they expect. Their teenage patois becomes poetry, and the story unexpectedly becomes a meditation on loss. Another story, “Over Here,” tells of the murder of an army wife from two points of view—her PTSD-afflicted husband, and a young reservist who first admires the older officer, and then hears his confession. The murderer’s point of view is told through footnotes, commenting on the younger man’s confusion.

Smith, a union carpenter, U.S. Army Reservist, and editor of “The Broadsheet Journal,” was born in Ottawa, Illinois. The title of his book is, of course, a dig at the dismissal of the Midwest by some coastal elites. Smith says in an author’s note that “if we can identify the reasons we treat the middle of this country with such open, but relatively harmless prejudice, we may be better equipped to identify those other darker, much more horrible prejudices that lurk in some of us…” In the tradition of Ray Bradbury and Sherwood Anderson, Smith uses “flyover country” to examine the fears and longings of humans everywhere. The quality of his prose helps to reshape the way a reader sees northern Illinois, the way Nelson Algren shaped how we see Chicago. A boy chucks a corn cob. It “caroms off the crenellated grooves of the earth, shoots up high. You lose it in the sun.” Smith plants his literary flag in Ottawa, and claims it for us all.

“Fly Over This: Stories from the New Midwest”
By Ryan Elliott Smith
Tortoise Books, 181 pages, $16.99