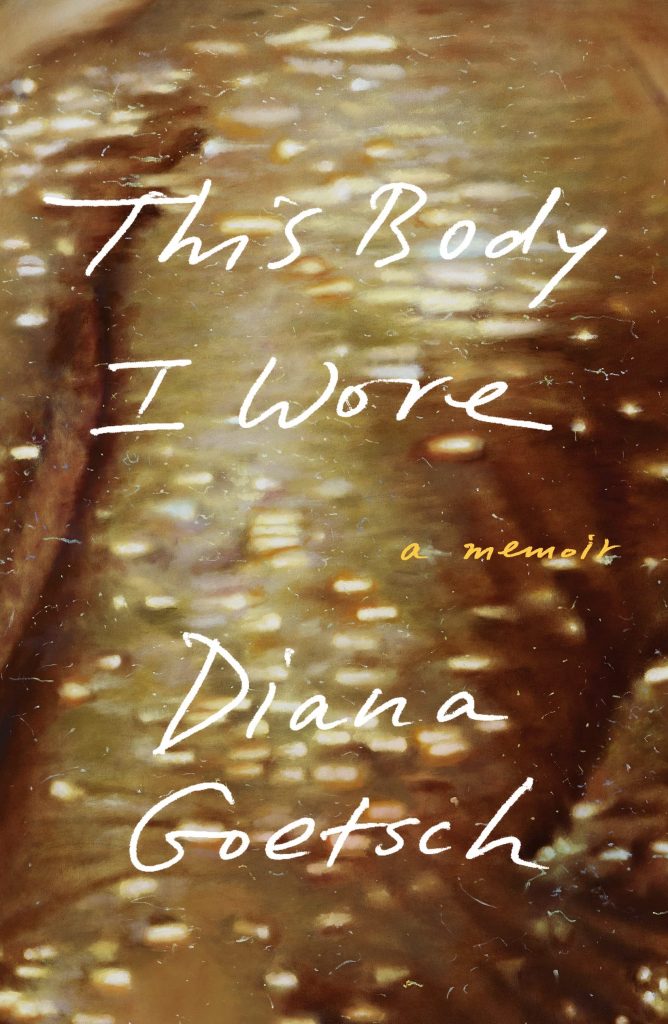 The opening of Diana Goetsch’s “This Body I Wore” begins with “A Note About Language”: “This memoir spans several decades, during which trans people in the United States referred to themselves in various and changing ways… As I, and others around me, tried to make sense of our identities, language was part of what shaped our reality. We misgendered and deadnamed ourselves left and right, in part because words like ‘misgender’ and ‘deadname’ had yet to come into use.” Although this note functions as a necessary trigger warning, it also raises thought-provoking points about the intersections between identity, language, and time, setting us up for the multilayered themes and questions to come. When it comes to the language in this review, I have deferred to Goetsch’s own.

Spanning a five-decade timespan, “This Body I Wore” is a companion to Goetsch’s American Scholar column, “Life in Transition.” “This Body I Wore” primarily concerns Goetsch’s life before her 2014 transition at age fifty. Alongside Goetsch’s personal journey, the trans community’s concurrent growth is also explored. By devoting so much space to her life pre-transition, Goetsch muddies the assumption that a clear delineation exists between life before transition and after. Goetsch’s journey is full of stops and starts, and it is neither as repressed nor as conclusive as we may imagine.

Early chapters in the first part deal with Goetsch’s collegiate days and life as a Stuyvesant High School English teacher in New York in the eighties and nineties. AIDS was still considered an epidemic in the United States, which did nothing to decrease prejudice against the LGBTQ community. In fact, Goetsch struggles with using “community” when discussing her New York City cohort of “crossdressers,” as “we didn’t trust what drew us together.” Goetsch’s association with such people was limited to clubs, where a division existed between “transvestites” and “transexuals.” (“Male to female transsexuals proclaimed themselves women who’d been ‘born in the wrong body’ and often looked down on transvestites as fetishists. Transvestites resented having their ‘lifestyle’ reduced to a fetish, and the vast majority of them identified as straight males.”) Goetsch did not initially consider herself “transsexual,” partially because of “her quest to be ordinary” and have relationships with women. But due to her gender dysphoria and past traumas, she did not first have sex until well past college, and intimate relationships continued to be a source of anxiety.

The second part flashes back to Goetsch’s often abusive childhood and adolescence, and the third takes us into the 2000s and Goetsch’s transition. Underneath each chapter heading, the year is given. In a past fiction workshop, we discussed how although it is essential to orient the reader, skipping time without stopping to catch readers up can be a successful technique, as it naturally creates tension and puts the onus in the readers’ own hands. I found myself thinking about this conversation during my read. Although Goetsch finds ways to give us the essentials, she often gives us gaps on purpose, and this creates tension that spurs us on to read further.

The term “compulsively readable” conjures up so-called light reads, but in this case, the readability of “This Body I Wore” in no way takes away from the emotionally charged material nor the complex questions it raises. Befitting of a former English teacher, Goetsch’s prose is clean and meticulous, and she is a demanding narrator, both of herself and of us. This is an extraordinary read that only deepens over time. Goetsch always does justice to the complexities in question, even if it means exposing her deepest flaws and insecurities. Reading “This Body I Wore” is an emotional experience, and the various complexions and contradictions are felt just as viscerally as they are intellectually. Intellect, after all, can only take us so far, and life’s deepest truths are felt, not reasoned. In this way, Goetsch invites readers to take the rein and to both physically embody her experiences and make our own discoveries.